Naples: Make Your Own Pizza in Disneyland's Downtown Disney

For most Disney vacationers, preparing your own food may not be the first thing that comes to mind when picturing the perfect getaway.  Some budget-conscious travelers may prep their own food to save some (actually lots of) money instead of paying for food in the parks, but working for your meal can also be fun!  As part of the Adventures by Disney Backstage Magic trip last fall, I had the chance to assemble a personal pizza at Naples Ristorante in Disneyland's Downtown Disney.

Before arriving at Naples, my pizza making experience consisted of buying Boboli pizza crusts, pouring on some sauce, then spreading cheese and pepperoni on top.  During this visit, I got some insight into how a real pizza pro works.  We were hosted by Stefano Ciociola, Chef de Cuisine at Naples, who gave a demonstration of how to handle pizza dough, walked us through the process of tossing our own crusts, then gave tips on making your own dough and cooking a pizza.  I didn't take notes while I actually had my hands in the dough, so I retained relatively little of what I was taught, but do recall that we learned to shape the balls of dough out into circles, then further stretch the dough using the tops of our hands to spin our would-be pizzas.  With the dough already prepared, it was relatively easy to work with and actually tossing the dough wasn't that difficult either, but the Chef kept a close eye on anyone who was having difficulty.

While this was a special surprise for our Adventures by Disney tour group upon our arrival at Disneyland, the same experience is available to any group visiting Naples, though I suspect doing so requires reservations and a fair amount of advance notice.  According to the Naples web site you can give them a call at 714-776-4000 to setup your own pizza party.


Some Tips from the Chef

Our gracious host, Naples' Chef de Cuisine, Stefano Ciociola, offered the following tips for us when we went home to try our own hands at pizza making. 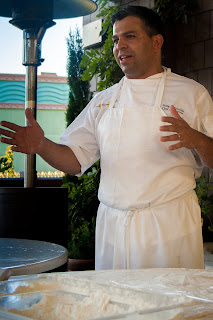 So, there you have what we learned at Naples.  It turned out to be a great group activity, being both educational and a lot of fun!  What do think of what we were taught?  Does it sound like fun for folks visiting Disneyland's Downtown Disney with a group? 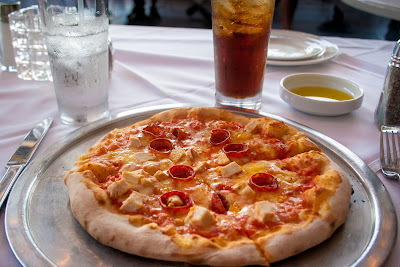