Starting with the May the Fourth celebration and running through Star Wars Weekends in 2014, Disney's Hollywood Studios offered two Star Wars character dining experiences and I had the opportunity to visit both. This article covers my visit to Jedi Mickey's Star Wars Dine at Hollywood and Vine.

I was eager to sample this new dining experience during my first visit to Disney World's Star Wars Weekends, hoping to make efficient use of my mealtime by meeting popular characters that would have required long waits to see during this rest of the weekend. The meal featured classic Disney icons dressed as Star Wars characters. Since food tends to be secondary with most character dining experiences, after the introduction we'll start by discussing my interaction with Jedi Mickey and friends.

Before being seated, the meal included a photo opportunity with Chip and Dale dressed as Ewoks. Disney PhotoPass photographers were present to take your picture and the price of the meal included this picture. As always, the PhotoPass photographers were also willing to take a picture with my camera, so I also had an image to share with friends right away, though the picture with my camera wasn't particularly well-taken. Chip and Dale are usually among the more amusing characters to meet, as they are encouraged to be their mischievous selves with guests, but in this case there were too many people waiting to eat that there was not time for any playful interaction. We just had our pictures taken and were herded back outside to continue waiting for our table. The price of the meal also included PhotoPass photos of the characters from the meal on the Jedi Training Academy stage, in addition to your own pre-meal photo.

Once seated, we immediately met Jedi Mickey, followed about fifteen minutes later by Stormtrooper Donald. Inside Hollywood and Vine you have a mostly unobstructed view of the entire restaurant, so once you determine the pattern characters follow it is pretty easy to know how much time you have before the next visitor to your table. It worked out well that we met Mickey, and then had time to get food before Donald arrived. Of course, at any character meal your experience may differ with the exact timing of when your table visits will occur, so be sure to ask the person who seats you where the characters will come from before they visit your table.

Later in our meal Minnie arrived, dressed as Princess Leia, followed immediately by Darth Goofy.  All of the characters visited our table within 40 minutes of being seated and, while we were catching up on eating after these visits, Mickey returned for a second visit before we left. Our interactions with Minnie and Goofy were cut short and somewhat uninspired, as they both took pictures, but that was it. Mickey and Donald were more playful, encouraging us to try difference poses and offering different pictures with our stuffed monkeys. In all cases, the photo opportunities during the meal were equal or better to what we would have experienced meeting the same characters in the parks, though we spent less time at the meal than we would have waited in line to meet all the characters on their own. Beyond just saving valuable park-time, meeting these popular Disney characters during Star Wars Weekends poses additional logistical challenges, as it is difficult to anticipate when characters you are waiting in line for may go on break or when they may be switched out for another character. This in itself adds to the value Jedi Mickey's Star Wars Dine.

Tables were also adorned with paper do-it-yourself lightsabers. If your child (or adult) wanted to test their Jedi powers with Mickey or take on villainous Donald or Goofy (or just beat their siblings over the head), then all they needed to do was roll up their red or blue paper and their weapon was ready to go.

When I'm not visiting Disney World I've also traveled to many casino destinations, so I've eaten a lot of buffets, everything from high-end to places that would give swill a bad name. Over the years, my tastes have acclimated to appreciate buffets that serve really good food, sometimes even cooked to order, with an enormous variety of cuisine from around the world. Disney offers no buffets that compare favorably to the best of Las Vegas or even the Borgata in Atlantic City, however Hollywood and Vine is one of the few Disney buffets where I actually enjoy most of the food. The selection is limited by mega-buffet standards (you'll find a couple items you enjoy, but won't feel like you need to return five times to try everything you would like), but the quality is above average. 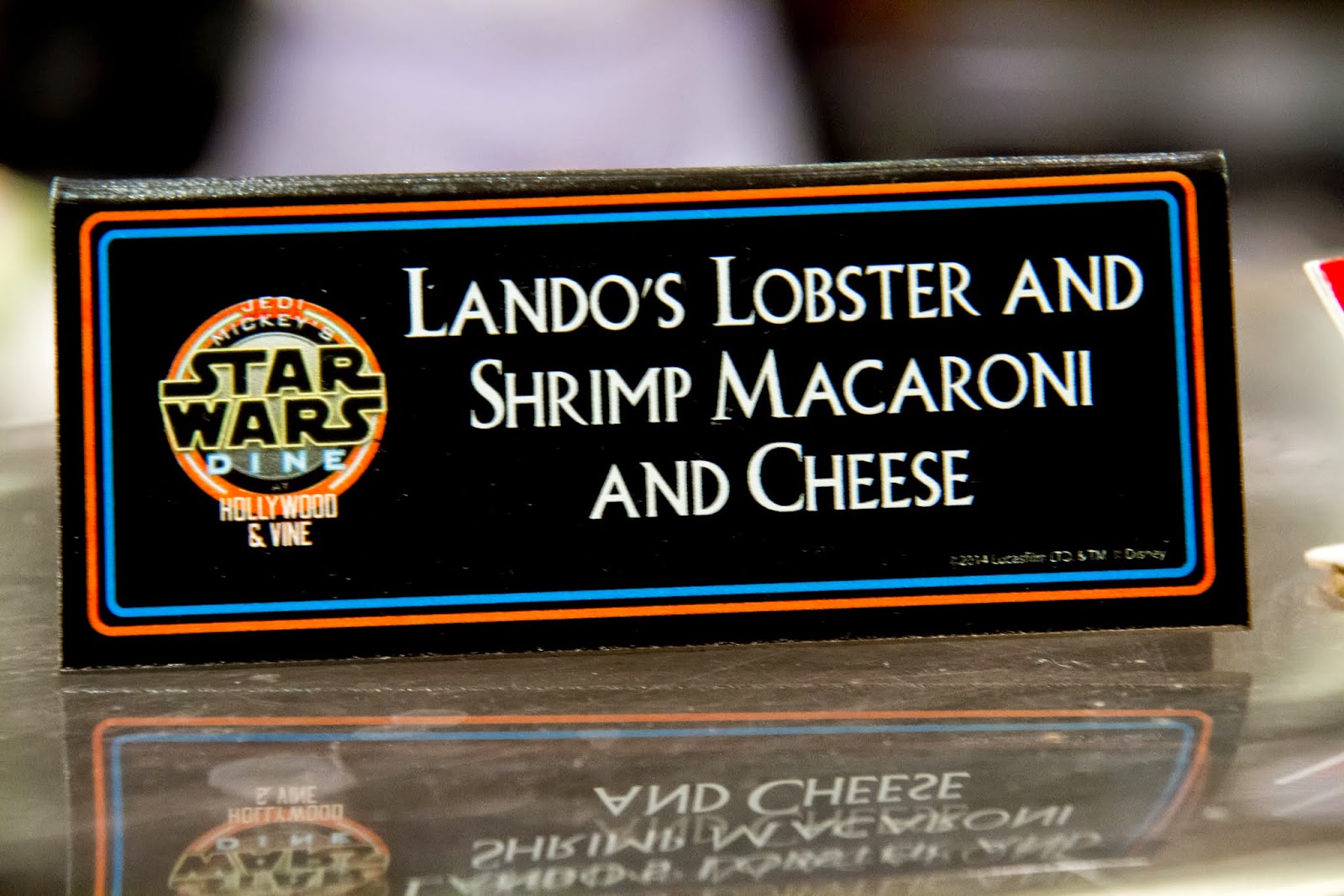 For the Jedi Mickey's meal, the standard Hollywood and Vine fare was replaced with remarkably similar looking (and tasting) food with Star Wars themed names, such as C-3PO's Cream Corn, Greedo's Green Beans, Mos Eisley Meatballs, or Tusken Raider Chicken. Even names of the food in the children's section of the buffet featured furry friends from a long time ago in a galaxy far, far away, like Chewbacca's Chicken Tenders or Wicket and the Ewoks Macaroni and Cheese. I sampled chicken thighs and the Tusken Raider chicken, along with meatballs, penne pasta, beef, and Lando's Lobster and Shrimp Macaroni and Cheese. The meat dishes were all well-prepared, and with the buffet being so busy, the food turned over fast enough to keep everything fresh. The lobster and shrimp macaroni is one of the highlights of this buffet, and even a person like me, who generally prefers the plainness of ordinary comfort food, appreciates the addition of tasty sea creatures to this dish (at least, when it's done well, as it is at Hollywood and Vine). Of course, those preferring to skip the seafood can find plain macaroni and cheese at the kids buffet (and there's no shame in taking items from here, the chefs will make sure the kids don't go hungry if you eat their food). Were it not for the price tag and the bizarre Disney Junior characters that normally inhabit this location, this is one of the only Disney buffets I'd visit just for the food. 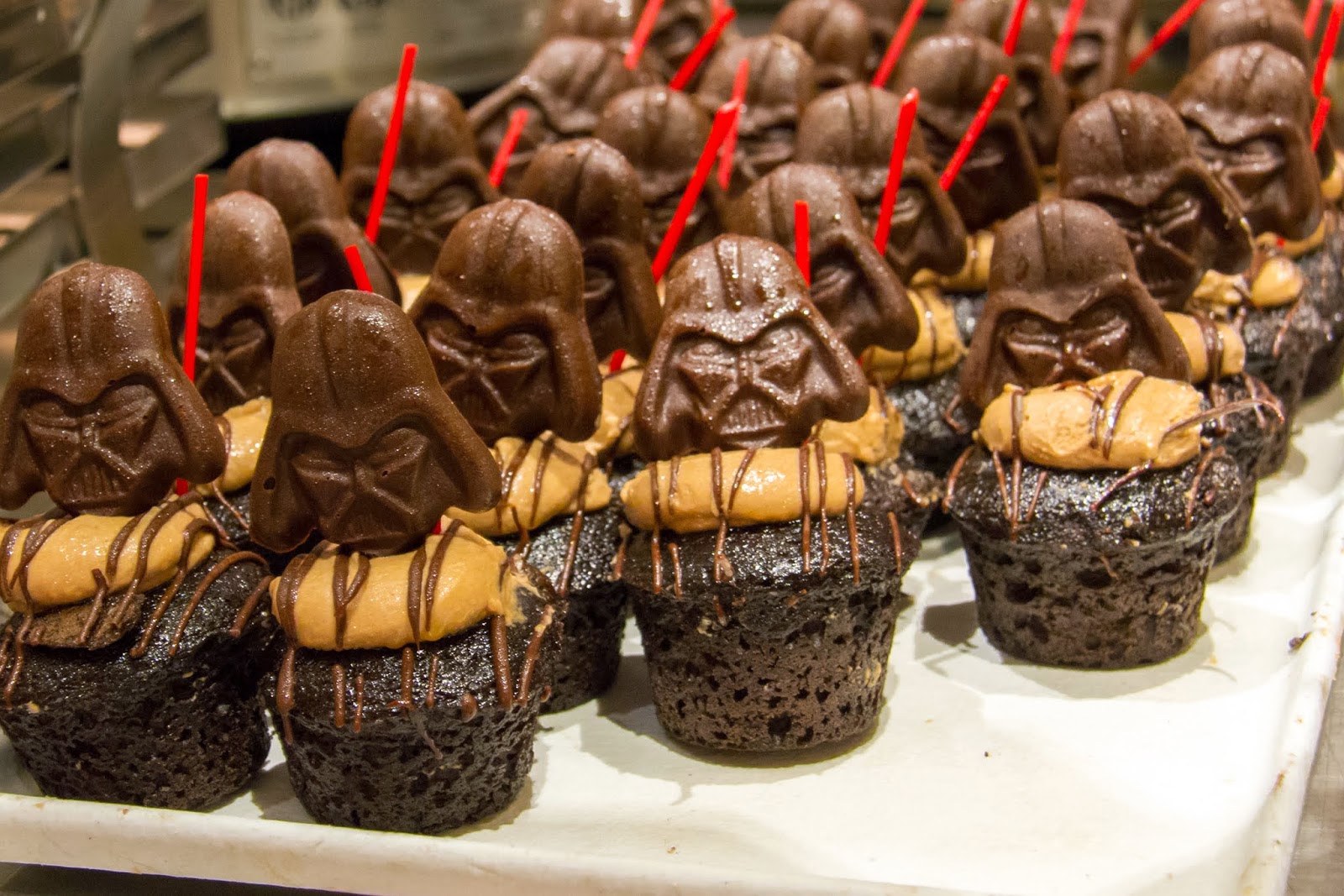 Dessert was where the buffet really embraced the Star Wars theme. Not only did these offerings come with Star Wars names, but the desserts looked like Star Wars characters, including both Yoda and Darth Vader cupcakes. The dessert stand was also surrounded by decorative Star Wars cakes that weren't available to eat, but did well to support the theme. A stormtrooper helmet cake was the most inspired of these. Since I was headed to a dessert party later in the evening, I only ended up sampling a small variety of the desserts that were available, including a small piece of carrot cake with R2D2 printed on top and cheesecake with a chocolate Star Wars logo on top, but I was pleased with all of my selections. Were I to return, I would do so with more of an appetite and not on a night when I was planning to eat more sweets later in the evening.  The desserts available here provide ample opportunity to work off all that exercise you get walking around the Disney parks all day.

The meal was expensive, costing $59.63 per adult with tax, but not including tip. Further adding to the cost was that the restaurant did not accept my Tables in Wonderland discount and had we been on the Disney Dining Plan, the meal would have cost two table service credits. Neither the food nor the character experience makes this meal a tremendous value, but Disney had no trouble filling Hollywood and Vine for this meal, so I don't anticipate any price breaks going forward. With the high price of most Disney table service meals, I considered that I was probably paying $20-$30 more than I may otherwise have paid for a buffet, but with the limited time I had available for Star Wars Weekends it was worth that extra cost to save time. Had I been on a longer vacation where I had more time to devote to seeing the Star Wars characters in the parks, I may not have seen this meal as an acceptable value.

I dined with a friend as a party of two with a 6:20 PM reservation.  We arrived at the check-in desk outside the Hollywood and Vine buffet at 6:10 PM, where there was a short line to check-in, followed by a much longer line to have our pre-meal photo taken. It was 6:35 PM before we had our pictures with Chip and Dale and then we were sent back to wait on the patio outside the restaurant, though it was only a few more minutes before our table was ready and we were seated at 6:38 PM. While waiting in line for our photo, we noticed many people called out of line as their tables were ready and Cast Members waded through the sea of humanity looking for diners to try to get them seated as quickly as possible. This pre-meal photo was a considerable bottleneck and the restaurant seemed to be struggling to keep pace with the crowds. Hopefully, that will be addressed as this meal returns, but if not, then plan an extra twenty minutes after your ADR before you are seated. 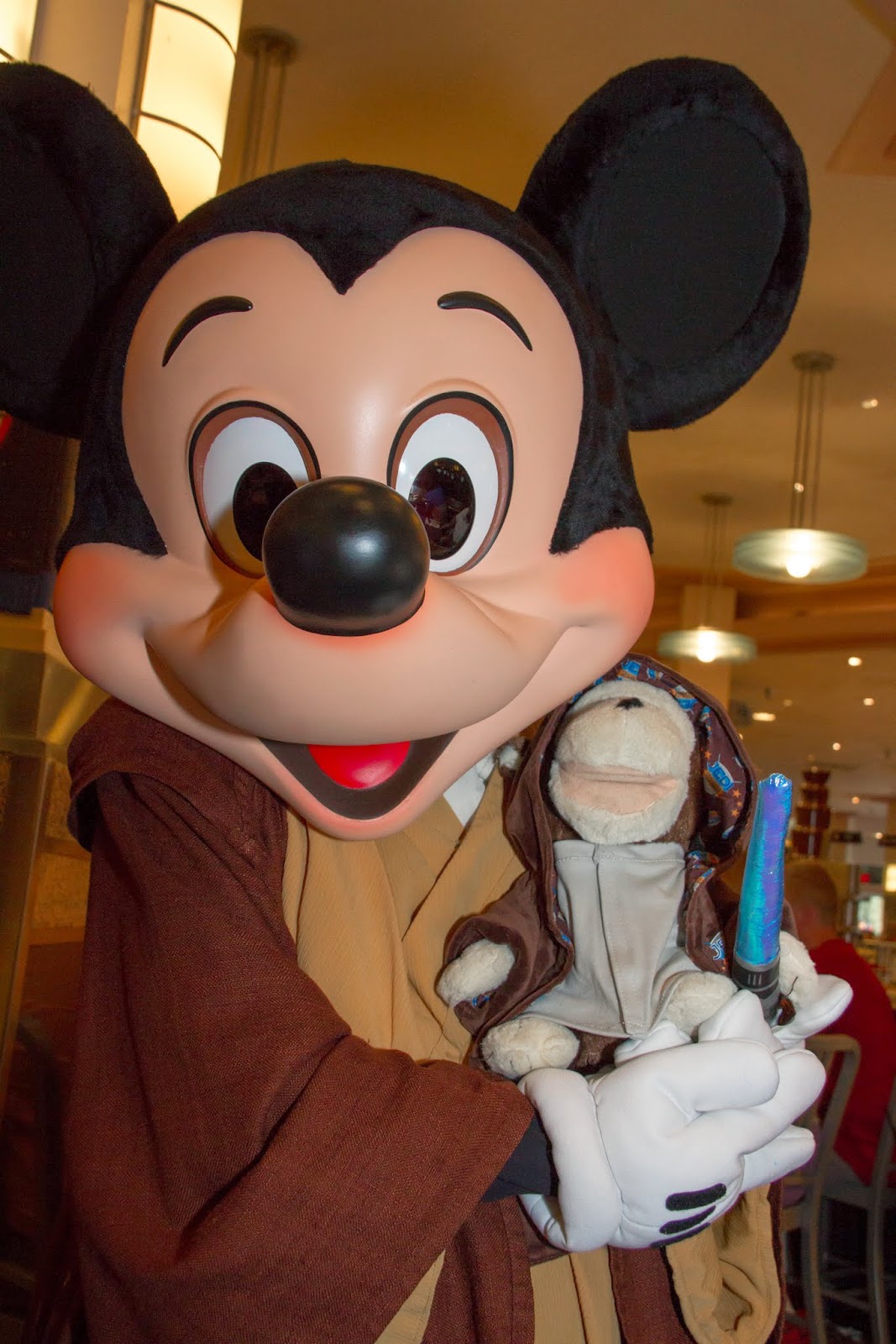 Jedi Mickey's Star Wars Dine was a positive experience for me. It is expensive, even by Disney standards, and the first year of operation posed some logistical challenges in handling the volume of guests and getting them seated in a timely manner. Not accepting Tables in Wonderland and charging two Disney Dining Plan credits hurts the value of the meal, though that's not likely to change so long as the meal keeps playing to packed houses. I do give Disney credit for making sure guests knew the costs associated with the meal, as I received a confirmation email explaining the costs about two weeks after my initial reservation. As for what you get for your premium price, food was above average for Disney buffets, character interactions were about what you should expect, and theming in the restaurant was minimal, with the exception of the desserts, for which the theming was exceptional. With time to meet some of Disney's most popular characters in their Star War costumes and "get your money's worth" out of the food selections, you'll spend more time (and money) than you would at most character meals, but if your time at Star Wars Weekends is limited and you want to meet Mickey, Minnie, Donald, Goofy, Chip and Dale, then dinner at Hollywood and Vine is an efficient way to do so.
Posted by Bob R at 6:20 PM