Why do I go to WDW? A Place Where People Look Out for Each Other

People often ask me why I go to Disney World so frequently and I've never been satisfied with the answers I've been able to articulate. It is a comfortable place, with a variety of fun activities, I know my way around, there is great food on property along with excellent cocktails served in beautiful seeings, and there are ample opportunities to practice different photographic techniques. So, the Disney parks and resorts fit well with some of my favorite hobbies and there's even a part of me that likes trying to outsmart the crowds and figure out how see and do more in a single day than most other guests would think possible. However, I could accomplish much of this without straying far from where I live, so there's more to why I choose to spend so much time in Central Florida and I will endeavor to answer that question for myself and for curious friends and readers in this series of blog posts. 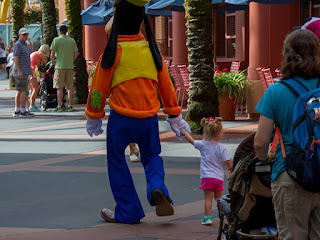 Before leaving Disney's Hollywood Studios this past Tuesday I saw a sweet moment that I was able to capture with my camera. Goofy had just finished meeting with guests and was setting off on a break, when he looked over and saw a little girl with her father. I did not observe whether the little girl may have been agitated with someone that went wrong in her day or really excited to see Goofy walking past, but I did see that Goofy took her hand and started walking with her on his way to his break.

There are a couple ways to look at this. The most common is to say this was a moment of Disney "magic." However, I don't buy that explanation. What I do believe is that the environment inside the Disney World "bubble" is one where everyone is expected to behave differently than in other places. It is a world in which everyone is expected to be courteous and to look out for each other's safety and well-being. Those expectations are explicitly stated to Disney Cast Member's and [Spoiler Alert] there is an actual human being inside that Goofy costume who not only has been trained to try to make other people's days a little better, but has also been surrounded by other people trying to make other people happy. This Cast Member, who just spent half an hour picked kicked, grabbed, pushed, and shoved in 90 degree heat and humidity, while wearing an unwieldy costume he can barely see out of, could easily have rushed off for his air conditioned break and few people would have faulted him for doing so, but he instead chose to create a moment that this little girl and many of her family and friends will remember for a lifetime.


For the most part Disney Cast Members take great pride in fostering an environment where people look for ways to create joy and inspiration for each other, but it is not Cast Members alone that may Disney parks that happy places that they are. I can't claim to be an expert on human behavior, but it seems that we generally understand that there are different expectations for us in different places. I'm not talking about a set of rules posted on a wall someone, but rather that when we see other people giving gifts to other guests, checking to see if we can help a stranger who looks distraught, or just striking up a conversation with people we've never met before, then we seem more likely to emulate that behavior. We don't do this because someone said we would be thrown out of the park for failing to comply with a rule, but because we feel safe to do so and maybe because we think that if other guests are treated each other with this sort of kindness and respect that we should do the same.

I've experienced many examples of special guest behavior over the years, but one that stood out from my most recent trip was this past Monday night standing near the Partners statue in the Magic Kingdom Hub, waiting for the new Once Upon a Time fireworks show to start. Shortly before the show was scheduled to begin we heard a P.A. announcement that the evening's show was delayed. During the delay, a couple guests and I started talking about how the show wasn't likely to be canceled and speculating why the show wasn't starting when it appeared that rainstorms from earlier in the evening had passed out of the area. A little bit after the show's scheduled 9:00 PM start we found out why we were waiting for the show to start, when the skies opened up and rain began pouring down on us. I had my camera setup on a tripod to photograph the show and a couple thousand people stood between me and the nearest shelter, so there wasn't much choice other than to ride out the storm in place. I had ponchos for me and for my camera, but didn't have time to take either of those out of my backpack before this particular storm arrived. While I was scrambling to keep my camera (and eventually, myself) dry two people who I had never met before decided they needed to protect my camera and hold their umbrellas over top of it. I didn't ask them to do this, but I didn't need to. They understood that in Disney World we look out for each other.

Some people dismiss Disney parks as "fake" and contrived environments. Buildings are, indeed, often just facades and I realize I'm not seeing the original Eiffel Tower when I visit Epcot, but the parks are more than just buildings and attractions. The real Disney "world" is one in which people want to make a little girl's day better or where they don't want to see a stranger lose his camera to a surprise rain shower. We can do these things in the "real" world, too, but too often we don't, so until the rest of the world catches up, I'll still spend some of my time in Disney World. 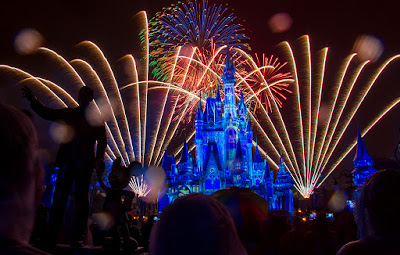