To celebrate Epcot's 35th anniversary on October 1, 2017, the RetroWDW podcast invited their listeners and anyone else who follows them on social media to join the podcast's hosts on a walking tour of Future World in Epcot. The tour was free of charge, scheduled during a break in the D23 Fanniversary that day.

The tour began shortly after 3:15 PM underneath Spaceship Earth. RetroWDW hosts Todd McCartney, How Bowers, Brian Miles, and JT Kuzior took turns sharing stories from their personal knowledge and research, along with some new stories they learned from the D23 events that weekend. While you would've needed to join the tour to hear all the stories, I'll share a few things that I found noteworthy.

The first topic of the day was the Epcot entrance fountain, which we learned took a circuitous route to arrive in Epcot, traveling over 8,000 miles across the country. Given the less than 3,000 mile width of the continental United States, that seems a lot farther than one would expect to travel from any given point in the country to Florida, but was required because the weight of the fountain made it too heavy to travel over bridges.

We also spoke about the acrylic sculpture that used to sit in the center of the entrance fountain. Over time, it developed small cracks and began to discolor, which led to its removal from the park. Fortunately, having attended the RetroWDW Looking Back At Tomorrow event the night before, I now have my own miniature version of that statue to remember what it used to look like (and you can see for yourself how that miniature was made). 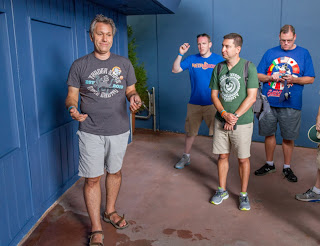 The group moved on to the second stop of the tour, just outside Guest Relations, which was once home to a bank of World Key kiosks. Those machines once served as interactive guides to the park, though they were best known as the places guests would make same-day dining reservations in EPCOT Center, via video conference with a Disney Cast Member.

We also discussed how the current Guest Relations was originally part of Communicore, and how today you can still see the windows to what was once a UNISYS corporate lounge inside Guest Relations.

A Vestige of Horizons

We stopped outside Mission: Space to visit the planter that once held the sign for the Horizons attraction. How Bowers described this as, "the last original piece of Horizons" (though, later that day the RetroWDW folks saw another piece of that attraction in use today inside Spaceship Earth, where a Smellitzer from Horizons has been put into service). If you look closely, you can see the planter is shaped like the distinctive looking Horizons attraction building.


A Short Visit to the Outside of Communicore East

Long before the Internet brought us news from around the world at a moment's notice, the idea of seeing what was going on somewhere else on the planet was quite a novelty. Communicore in EPCOT Center featured the Electronic Forum exhibit, which included the News Choice Theater, showing television broadcasts from different parts of the world. This necessitated a collection of large satellite dishes to bring the live signals to guests in Florida. Todd McCartney showed us this location, outside what was once Communicore East. 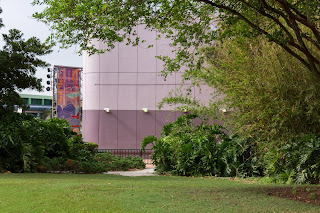 This nondescript wall once held a scrolling marquee on the outside of the Communicore East building. Apparently, these signs were installed without any thought of how maintenance were to change the light bulbs when they needed to be replaced. Eventually, a special device was built to facilitate changing the bulbs, but that wasn't the only time operations dealt with this sort of problem, as the lights above the Information Fountain inside Communicore West could only be accessed by a somewhat precariously-placed ladder over the fountain.

This sinkhole turned small lake near the Odyssey restaurant and the Mexico pavilion was once the location of a family of flamingos. Brian Miles described how that flock was later relocated to Disney's Animal Kingdom and can still be seen today near the end of Kilimanjaro Safaris.

We also talked about the Odyssey's days as a quick service restaurant, while also learning that it also hosted a character meal at one point. 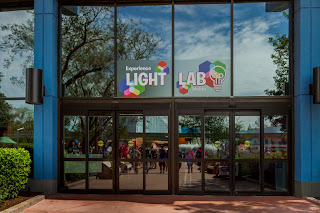 Our tour continued to the other side of Future World, where we stopped to discuss the room that once held exhibits celebrating Epcot's 25th anniversary. From what our hosts had heard, some of those displays were still visible in that room, walled off from the general public, until the space was selected to be used as the Light Lab during this year's International Food & Wine Festival. We also talked about the location of Epcot's version of the Magic Kingdom Utilidors, where a trash vacuum runs under Communicore.

A Visit to the Imagination Pavilion 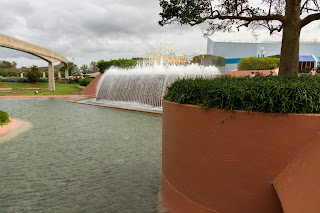 We moved toward the Imagination pavilion, where we stopped near the fountain that flows upward. We learned the sculpture above the fountain has changed from what was originally installed in the park and that the original design for that sculpture was copied from one found on a Kodak company playground. On another Kodak-related note, since that company no longer sponsors the Imagination pavilion, what was once their corporate lounge is now being used as offices for Walt Disney Imagineering (though, I've also read those offices are used by Future World East management).

Our tour ended outside The Land pavilion, where our hosts (and some of the tour guests) pointed out the subtle difference between the two tile murals on either side of the entrance to that pavilion. Can you find the one different color tile on these otherwise mirror images of one another (ignoring the slight differences in how the photos are cropped and the position of the glass covering part of the mural)?

This was my second tour with the folks from the RetroWDW podcast, having joined the hosts for their Lake and Lagoon tour last November, and both tours have been enjoyable experiences. I had heard some of the stories they shared, but even hearing something familiar takes on an added relevancy when you are standing in the spot where that piece of history once took place. For me, this tour was more about the nostalgia of remembering the EPCOT Center I first experienced in 1983 (I shared photos of that visit if you'd like to see!), but the hosts still managed to find a few things I hadn't experienced myself, touch on topics I hadn't thought about in years, and add a few details from the D23 events they were attending that weekend. Add that to the chance to spend time with some fellow EPCOT Center fans and this was an hour and a half well-spent.