Book Review: Building a Better Mouse: The Story of the Electronic Imagineers Who Designed Epcot 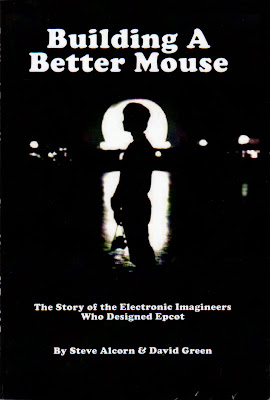 
I was initially disappointed by what was not included in Building a Better Mouse, but was soon taken in by the unexpectedly compelling story of the construction of EPCOT Center mostly from the perspective of the electronic engineers in California who designed the systems that operated the attractions in the park, primarily the American Adventure.  When I first purchased this book and read it (a year and a half ago) I hoped to read about all the pavilions in their early days and see pictures of EPCOT Center being built.  This book does not attempt to take on the ambitious task of documenting all of the construction of a park as vast as EPCOT Center.  Instead, the book attempts to put you in the shoes of some of the people who helped bring that park to life and does so effectively.  Perhaps it shouldn't be surprising, given Disney's history of impressive storytelling, that the authors would know how to tell a tale.

The book is rather short, with only 130 pages of text, and the edition I read would have been considerably improved by the addition of pictures and diagrams to better tell the story.  There is a new "30th Anniversary" version of the book, which includes a note that it is now "with Photos," so if you are considering purchasing the book, then I recommend the newer version [Note: At last check, Amazon was selling both versions of the book for the same price; our link at the bottom of this review is to the newer version].  Continuing my list of gripes is that with two different authors it can sometimes be difficult to know which one is telling the story, but my biggest complaint with the book is the casual use of first names.  Whether it be Mark, Marty, Jane, Brian, Jenny, or a host of other names I often felt as though I should have known who people were as they appeared in stories.  Early in the book more than a dozen engineers and managers are introduced within a few pages, so the second time I read the text I made note of all of their names and (when-provided) the descriptions of their jobs, but even after doing so I still found a host of new characters appeared in different anecdotes without a proper description of who they were or what role they played in the story.  Generally speaking, I could still figure out what was going on, but it would often have helpful to know who some of these people were - managers, colleagues, co-ops from college, engineers from another team?  Too often it felt like people telling inside jokes that I wasn't in on.

Despite that criticism, the story is otherwise very-well written, introducing the "normal" work environment of a Disney imagineer in California in the late 1970s and early 1980s and documenting how their lives and jobs changed as employees relocated to Florida in preparation for the opening of EPCOT Center.  The book documents the increasingly hectic days when the previews prior to the park's opening drew near through transcripts of an audio diary kept by engineer Glenn Birket.  This successfully conveys the strain everyone was under to bring the American Adventure online in time to the park to open, along with the seemingly impossibly long hours that were needed to do so.  The book also serves as a reminder that projects of the size of EPCOT Center don't last forever, and as much as building the park consumed the lives of so many people, it was not long after construction was complete that their services were no longer needed.  As the author's elegantly describe, their "ears were amputated."

"A project like this is so vast in scope it will take the cooperation of many people to make it a reality."  These were the words of Walt Disney, describing his original concept for EPCOT in a film promoting the plans for his Florida Project.  Near the beginning of the book the authors quote several paragraphs from that film that were part of the "pixie-dusting" of young engineers (and presumably others who built the park) as they started their careers as Disney Imagineers.  These words, in particular, serve as an important reminder that actual people, lots of them, built the park that so many of us look back upon with fond memories.  It is easy to remember the shows and rides, but Building a Better Mouse sets out to make sure we don't forget the people behind the scenes who made that happen.


If you wish to purchase Building a Better Mouse, then please use this link to amazon.com.  NOTE: Using this link will help support this web site, as amazon will offer (at no additional cost to you) a small portion of the purchase price of the book to our site.

If you enjoy this book, then you may also enjoy some of Steve Alcorn's other books, including another focusing on theme park design and a handful of novels.  You can see these books listed on his publishing site (http://www.themeperks.com/).  Alcorn also offers an online class in theme park design at (http://www.imagineeringclass.com/) and appeared on The Season Pass Podcast (http://www.seasonpasspodcast.com/) Episode 157: The Steve Alcorn Interview - http://traffic.libsyn.com/seasonpasspodcast/The_Season_Pass_157.mp3