What's So Special About Wishes? 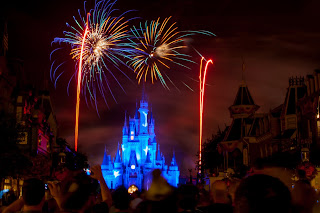 At some point in the past year I've become a convert.  Fireworks shows are fun, but for quite a while I preferred to use the time when most Disney World guests gather for fireworks to take advantage of the shorter lines for attractions.  After all, there's nothing all that special about watching flashes of light in the air, right?  I figured I've already seen the evening shows, so why waste time fighting the crowds to see them again?  Besides, you can still sorta watch the fireworks while you're walking around the park.  Turned out I didn't realize what I was missing. 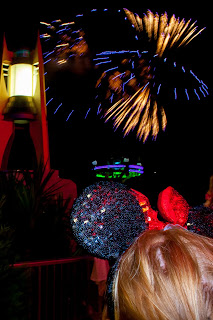 So what changed?  Why so many questions at the start of this article?  The answer begins last April, one evening after my cousin and his family decided to head off to bed after dinner and I decided it was too early for me to turn in.  I jumped aboard a boat from Disney's Wilderness Lodge to the Magic Kingdom and arrived just as Wishes was beginning.  Rather than fight my way through the crowds on Main Street or sneak through the gift shops, I decided to stop and watch the show.  When I walked through the turnstiles I headed straight up to the stairs to the train station on Main Street in time to see the last five minutes of the show.  The following evening, I returned to the Magic Kingdom with my cousin, his wife, and their five year old son.  All of us ended the evening watching the fireworks together, this time from the middle of Main Street, standing among the crowd, hearing the oohs and ahs from people around, including those in my family, who had never seen the show before.  So, maybe there was a little more to Disney World fireworks than I remembered.

Fast forward to late June when my sister and I returned to Disney World and she and I stopped and watched Wishes twice.  In between park visits I had purchased and read How to Photograph Fireworks, an ebook from the some of the contributors to the Disney Photography Blog, so I was eager to try out what I learned.  Unfortunately, I forgot to bring my tripod to the park the first night we visited the Magic Kingdom.  Fortunately, that meant we watched Wishes again the second night we were in the park.  Watching the show with my sister added another layer of sentimentality to the show, as two years before her now-husband proposed to her during a fireworks cruise on Seven Seas Lagoon. 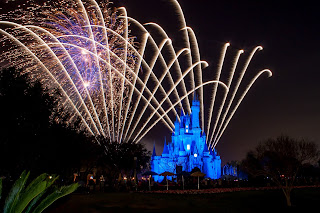 My initial foray into fireworks photography was fun, but left plenty of room for improvement.  Thus, still not completely satisfied with the images from June (the first tripod I brought along was too short and I wanted to try shooting the show through a neutral density filter), I returned to the Magic Kingdom in late January of this year.  I had a day in the parks alone after watching a hockey game in Tampa the night before, and with no one else's schedule to keep but my own, I setup for the show well ahead of time, which meant I found a location with an unobstructed view of Cinderella Castle and also gave me a chance to setup a video camera.  The visuals I captured don't do Wishes justice, but the audio is pretty remarkable. 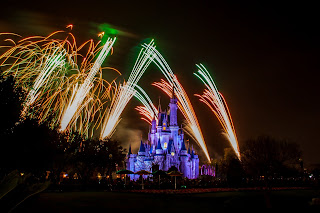 I setup my cameras (video and still) among one of the stroller parking areas facing the Magic Kingdom's castle.  After I scoped out my great location for the Celebrate the Magic projection show and Wishes a number of people came and went, some of whom picked up their strollers, which made more room along the rail where I was stationed.  A young family soon joined me in the same location, politely asking if they would be blocking my cameras.  They weren't, and I figured that even if they were that it was more important that the kids enjoyed the show than whether or not my pictures and video turned out the way I hoped.  As Magic Kingdom cast members moved everyone out of the nearby walkway, across the masking tape line they created, I urged the family to let their kids sit at the railing next to my cameras.  The family settled in, and it must have been instant karma that my video camera recorded their joy as they were amazed by what they saw.  It's pretty easy for regular visitors to Walt Disney World to take for granted some of the amazing spectacular shows the park offers, but spend a little time with some people who haven't been there before or who don't see the shows very often and it's pretty easy to remember some of what Disney does best.