In recent years the Outdoor Kitchens have become one of the highlights of Epcot's International Flower & Garden Festival. In early March I had the chance to sample some of the 2015 offerings. Have a look at what I tried and see the menus from the food booths around World Showcase.

Mexico Pavilion - Jardin de Fiestas
Jardin de Fiestas includes a couple offerings that are likely to please any Mexican food lovers palate. This year I didn't eat much from this food booth, having been underwhelmed by their offerings in years past and not being able to justify the pricey tequila flight while traveling alone. However, I did try the vegetable quesadilla, a flour tortilla filled with Monterrey Jack cheese and mixed vegetables, as an appetizer before lunch. The quesadilla was light and pleasant, but the $5.50 cost for one serving was a little harder to swallow. 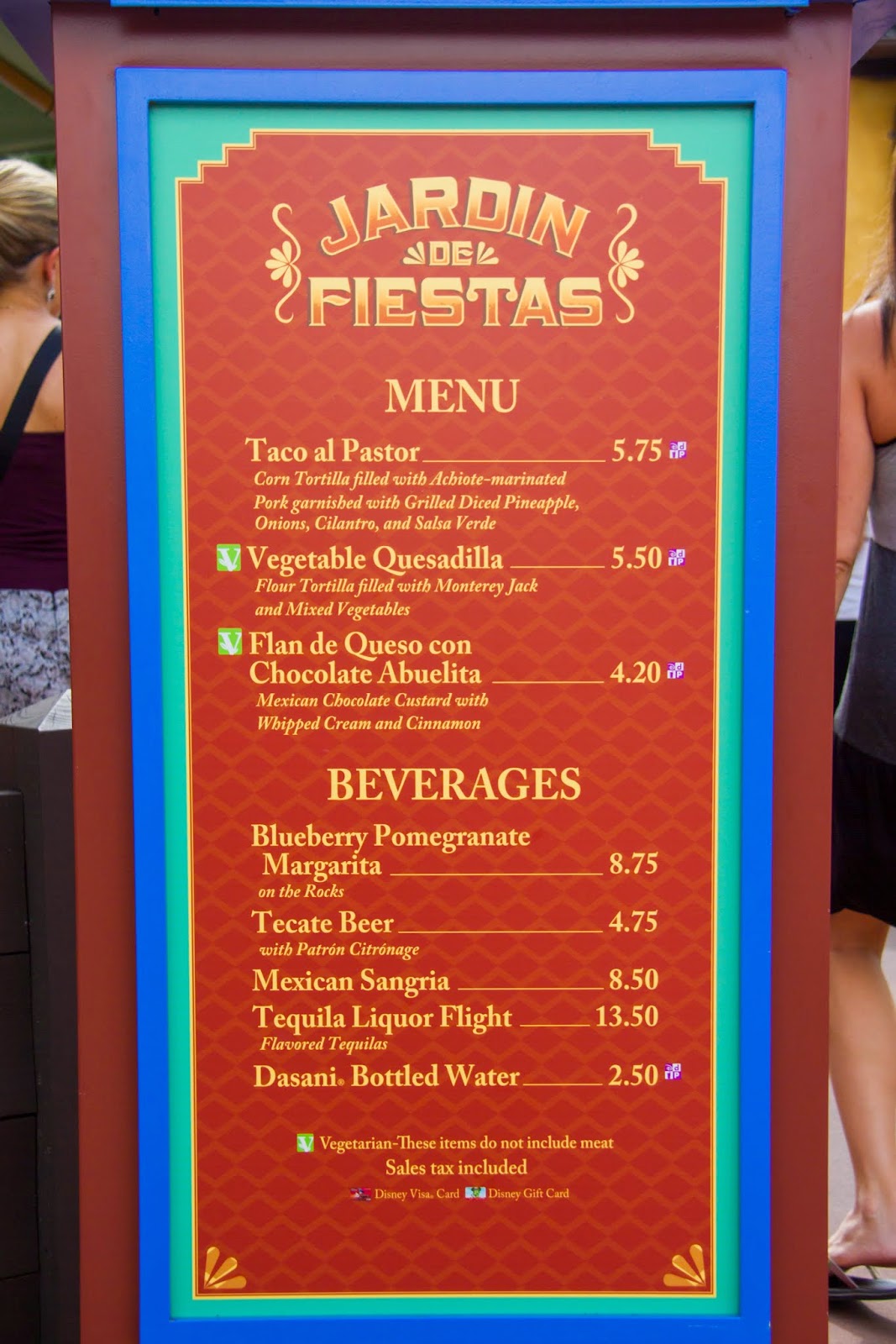 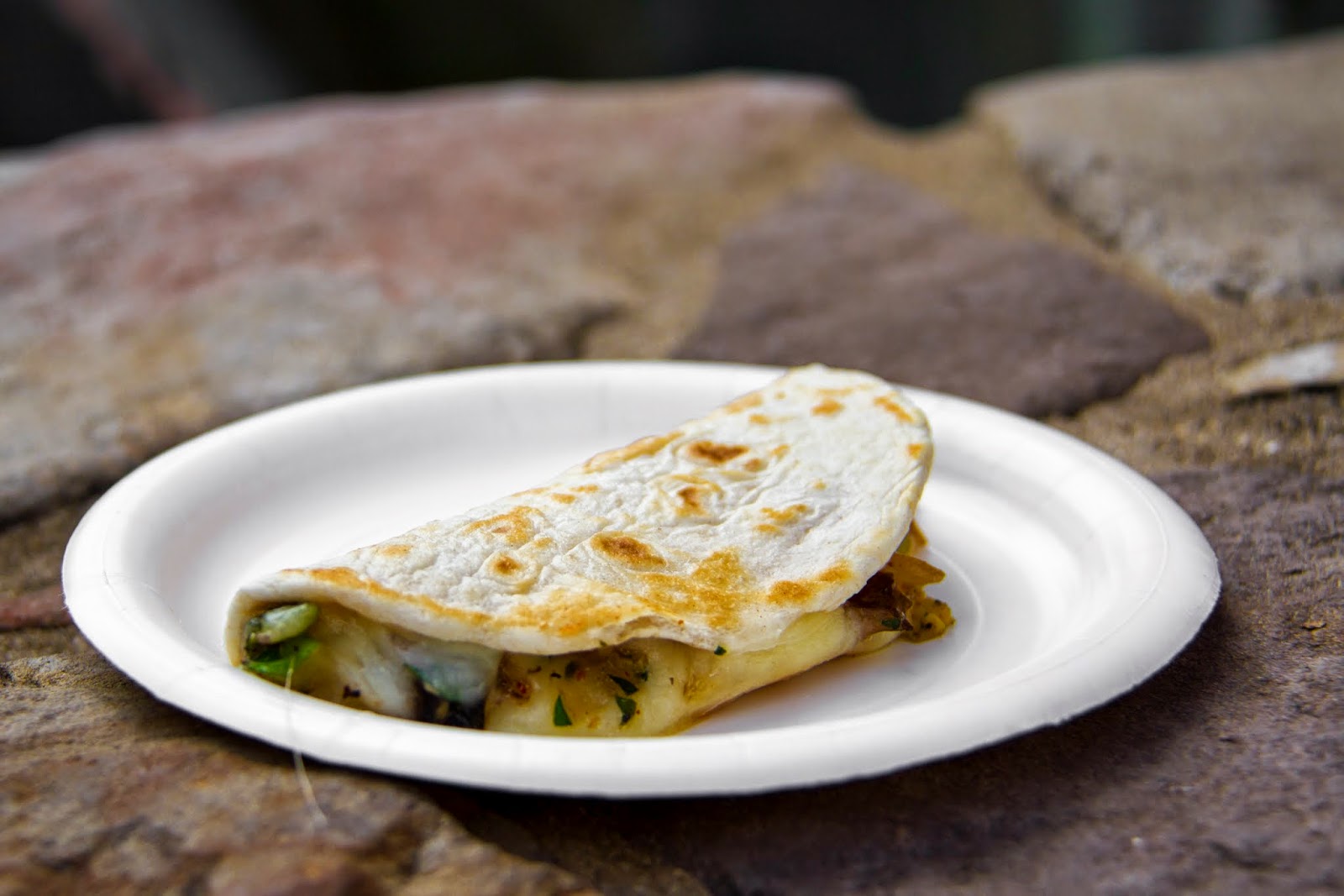 China Pavilion - Lotus House
I made two stops at the Lotus House this year. The vegetable spring roll was my first food item of the Festival, and I later returned to try the Kung Pao chicken bun and South Sea Storm for lunch a couple days later. The spring roll was a great way to start my Festival dining, served fresh and just the right crispiness. I wasn't thrilled about the sauce it was served with, which didn't really add much flavor, but it was off to the side, so I could eat the rolls without it. With a price 75 cents cheaper than the one quesadilla in Mexico, this was also a much better value.

I didn't have huge expectation for the Kung Pao chicken bun, but it turned out better than I expected. It was a little heavy on onions, most of which I discarded from the sandwich (or, rather, fell out on their own). The bun was light enough to not overwhelm the chicken, but the sandwich was still hearty enough to be a good lunch meal. The South Sea Storm, a mix of guava with light and dark rum, was better than the unnecessarily sweet Kung Fu Punch that I tried in 2013, but probably not a must do in years to come. If you do try it, then be sure to stir thoroughly before drinking, as I didn't do so and my first sip with almost all rum. 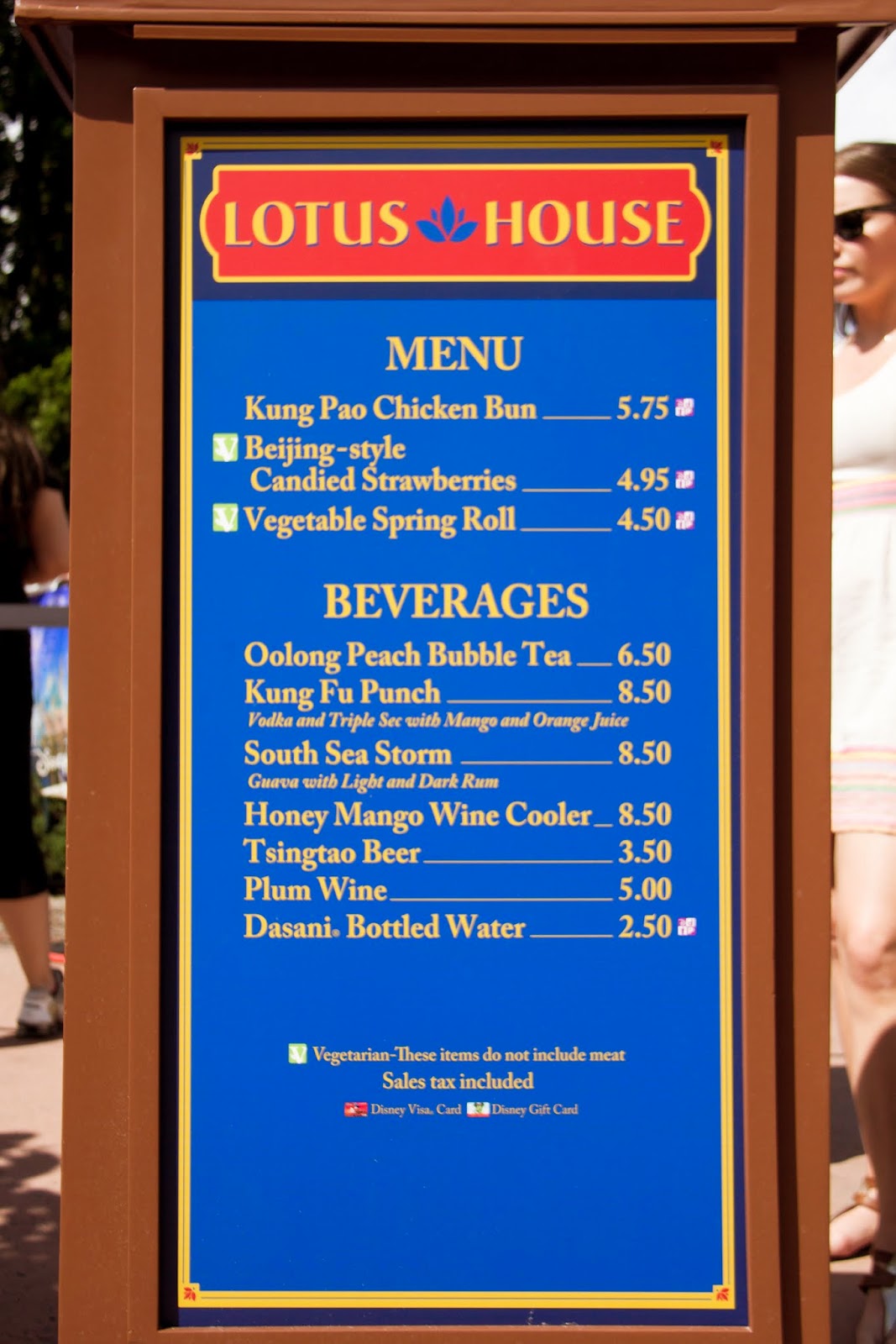 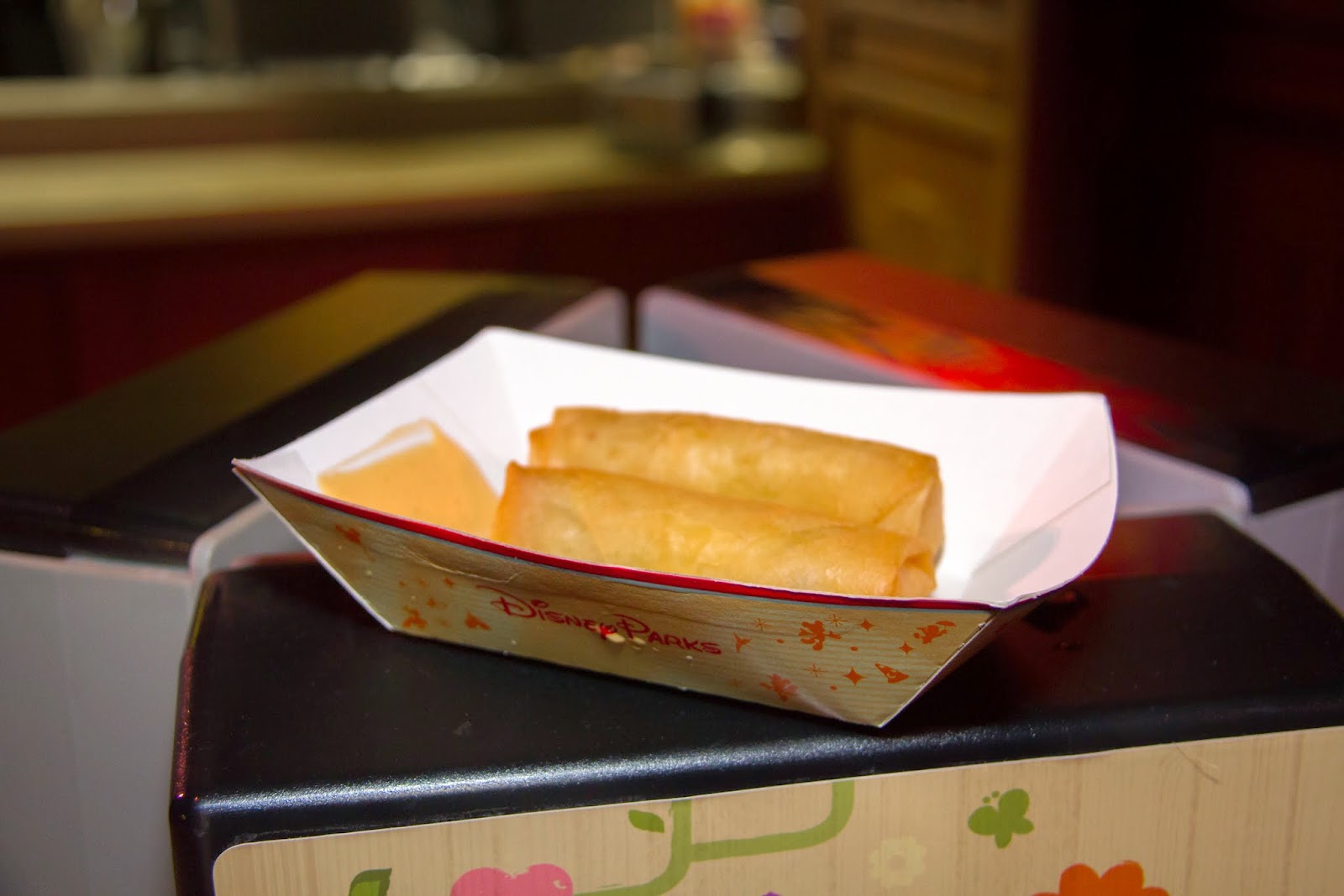 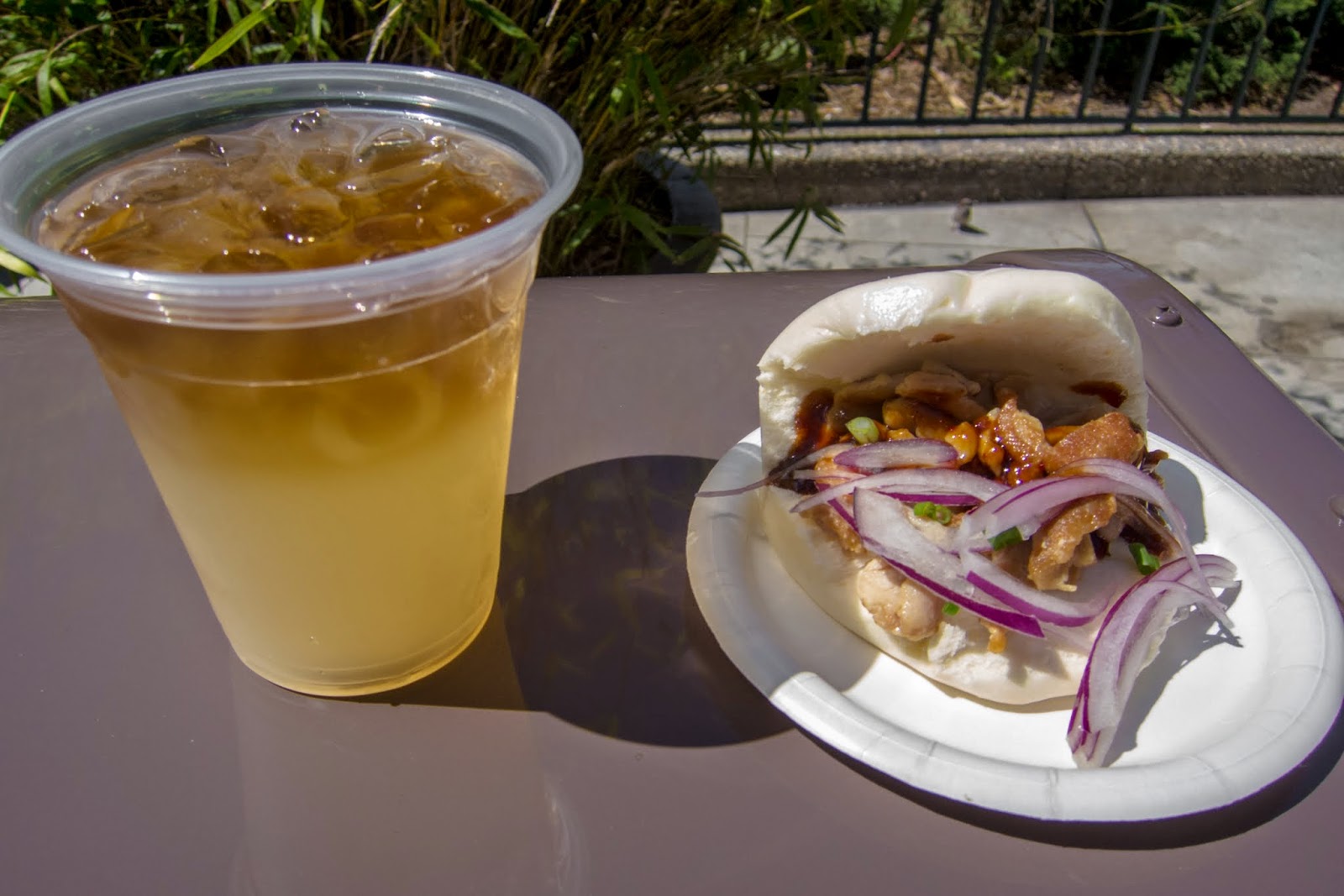 Florida Fresh
Adjacent to the German pavilion, Florida Fresh offers a variety food and beverage selections from the state of Florida. Part of the Festival since food booths were introduced in 2013, these local offerings have been something I, as an out of state visitor, appreciate. The beer selections each year have been uncommon where I live and have paired well with the food selection. The shrimp and stone-ground grits with andouille sausage, sweet corn, tomatoes, and cilantro has been one of my favorite food offerings each year it has been offered during the Festival, so I was eager to try the that again and it did not disappoint. The dish provides great complimentary flavors with just enough kick. I also sampled the Florida Beer Company's Feast of Flowers Farmhouse Ale, which was a little too hoppy for my tastes, but worked well with the shrimp and grits. A few days later I also sampled the 3 Daughters Brewing Company Channel Marker Red Ale, which wasn't particularly noteworthy, but was an easy drinking beer that I enjoyed on a warm day late in my stay. 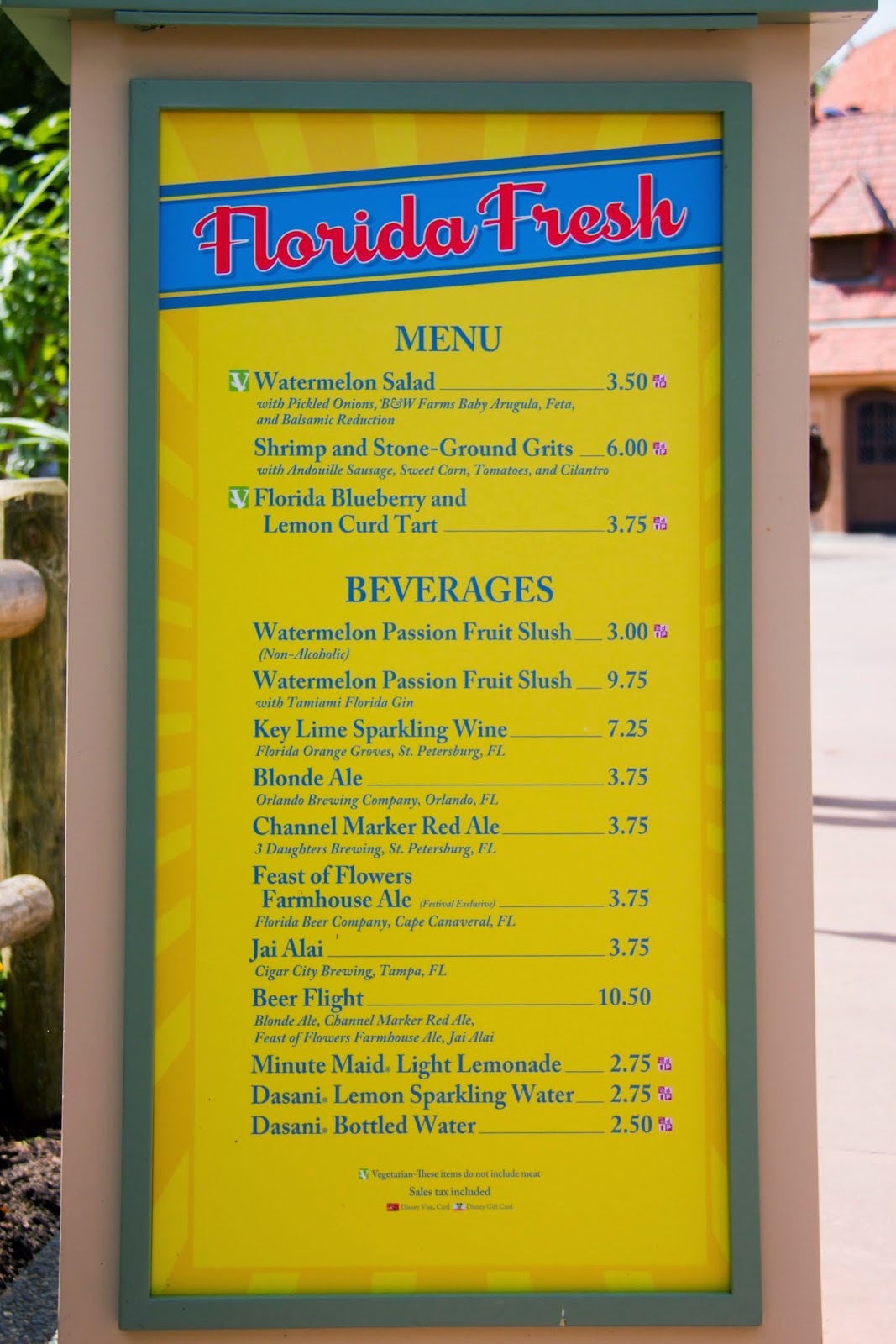 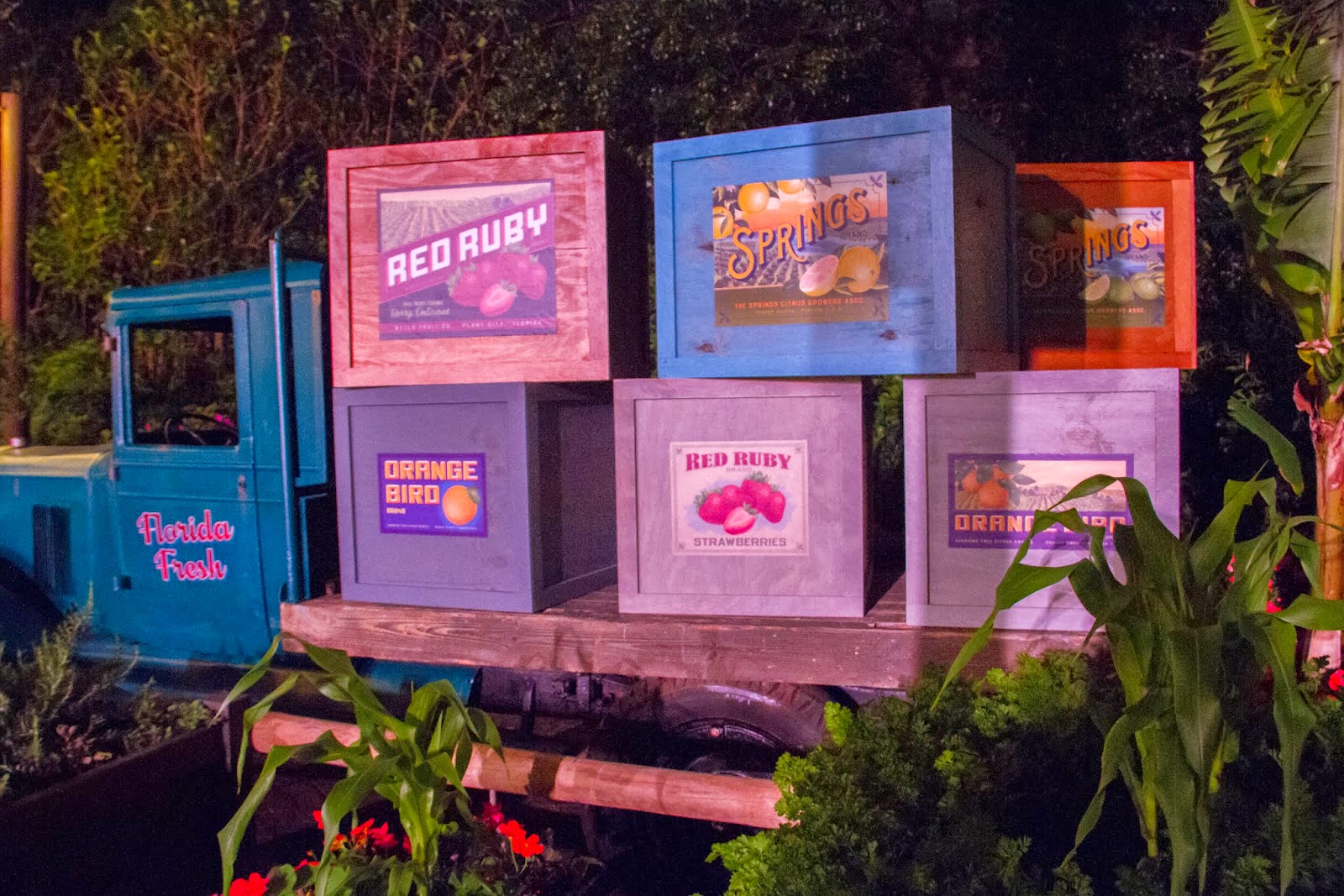 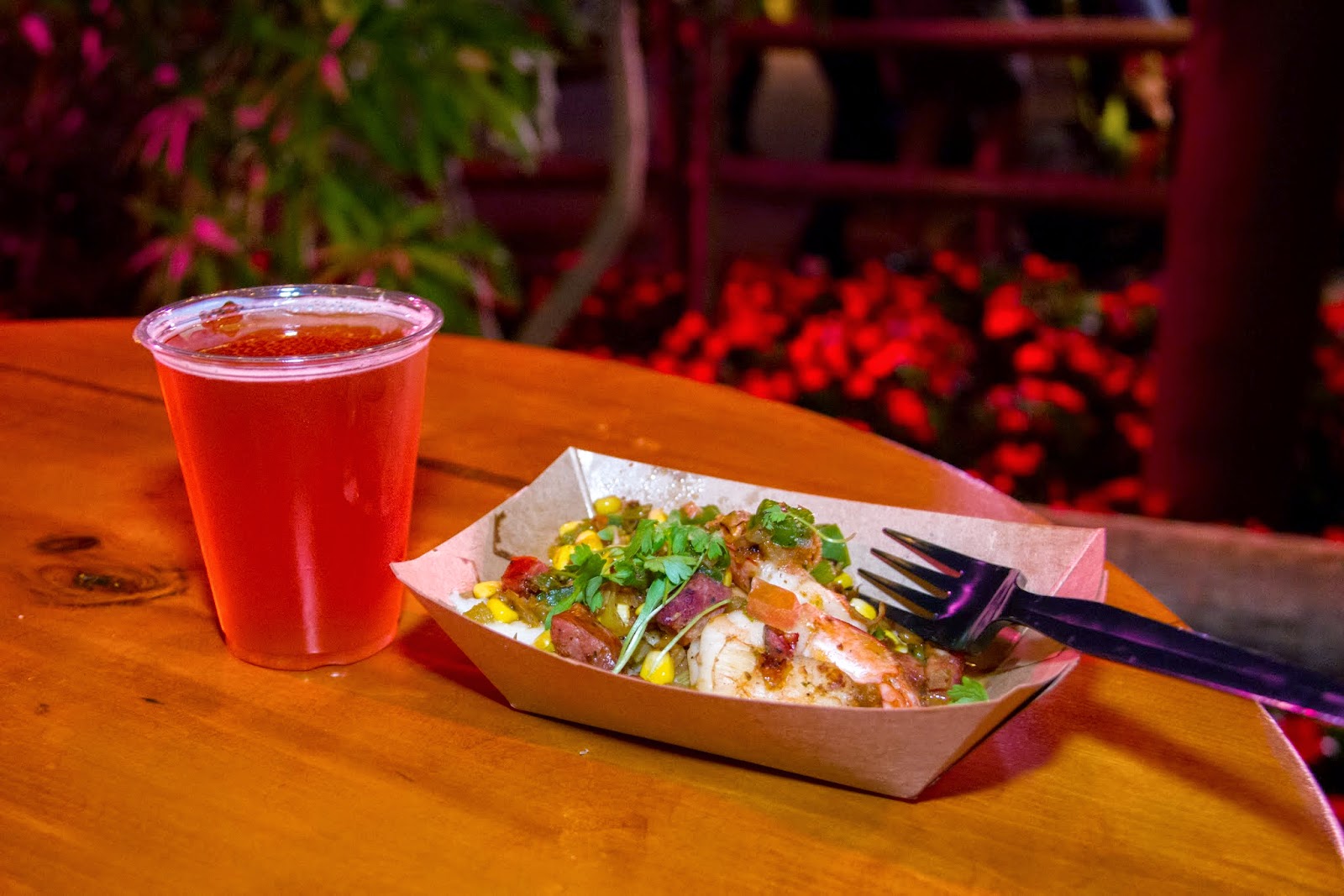 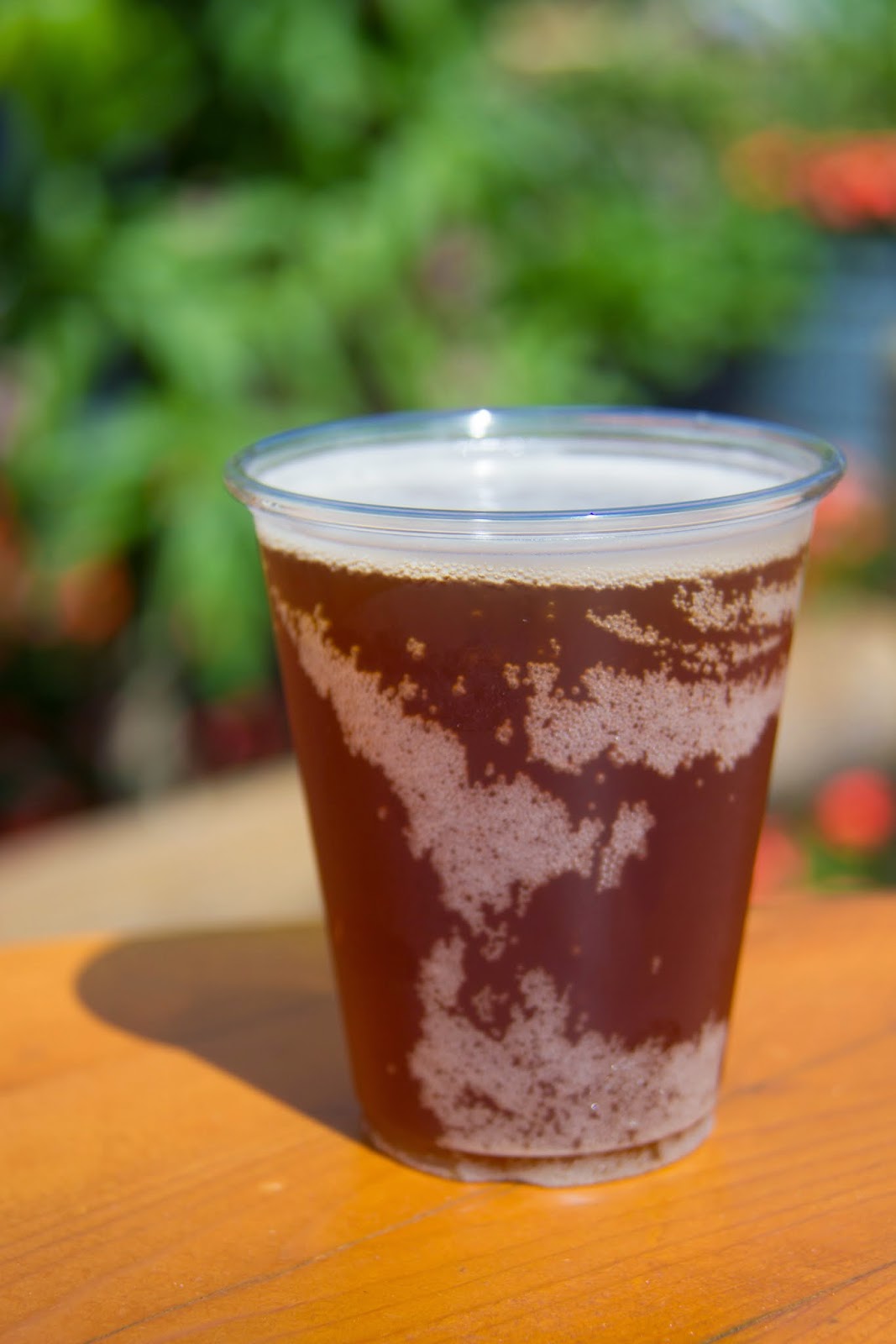 Italy Pavilion - Primavera Kitchen
Not wanting to try the cheese platter and having been underwhelmed with the manicotti last year, I only visited the Primavera Kitchen briefly. Wine lovers may appreciate some of the Italian offerings here, but since I focused most of my alcohol consumption on beer and have tried (and enjoyed) the Moretti Lager and La Rossa offerings on other recent visits (they're available all the time at the Tutto Gusto wine bar), I skipped drinks here entirely. What I did try, the Limoncello panna cotta, a lemon custard with Limoncello liqueur and raspberries, was quite good, though at $5 for I probably wouldn't pay for such a tiny portion again. 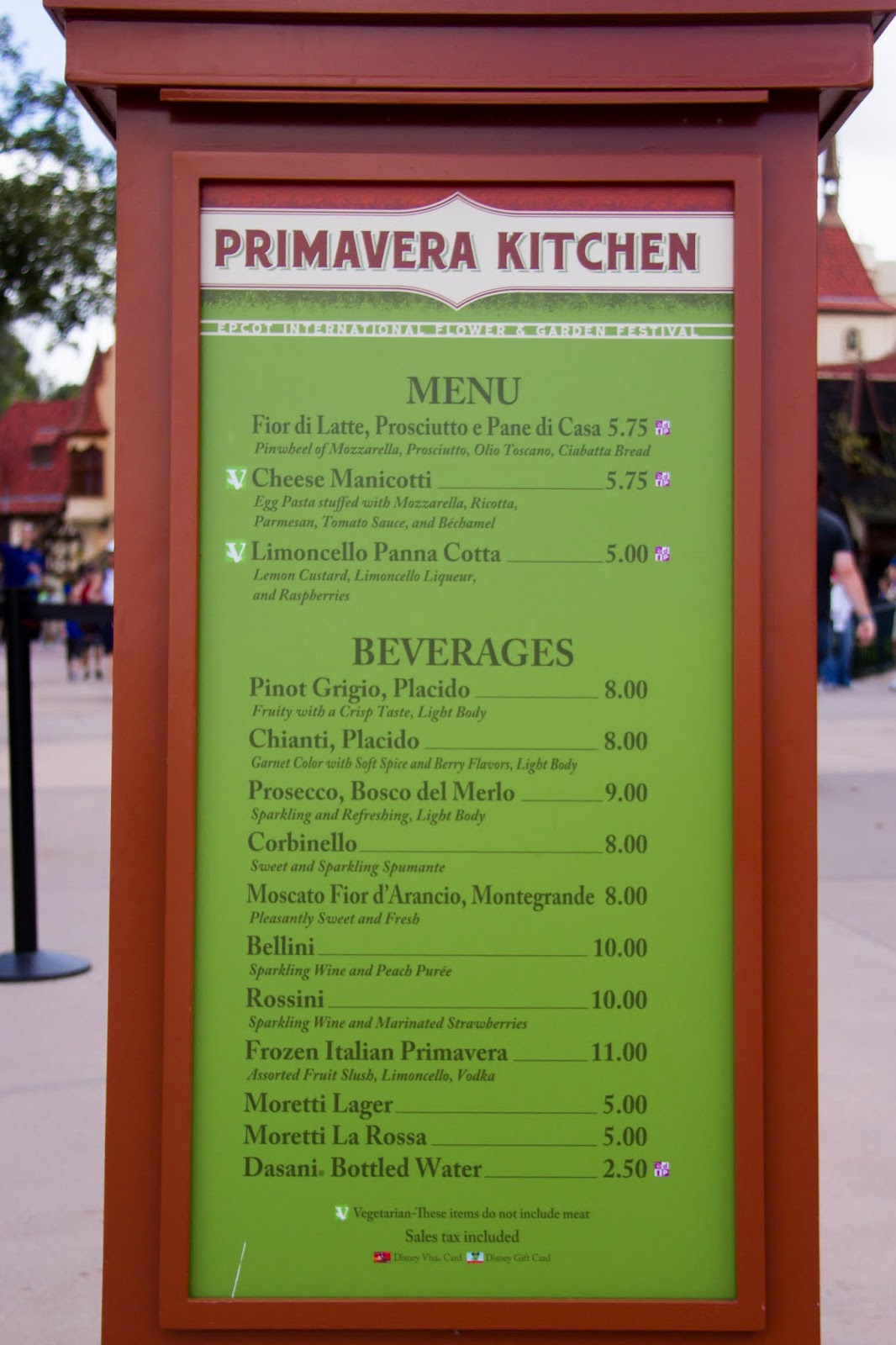 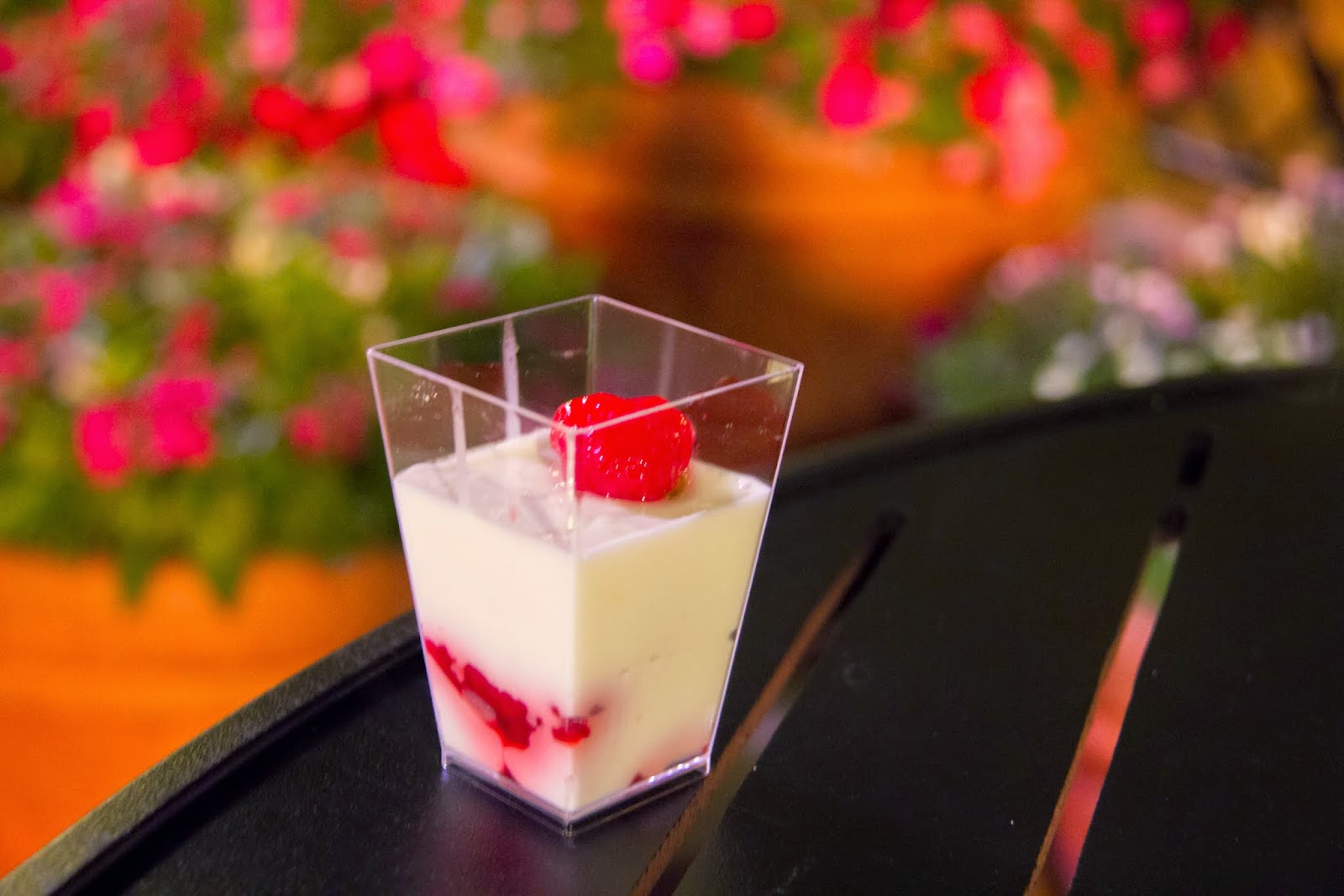 United States Pavilion - The Smokehouse
For most of the year the United States pavilion is at the bottom of my list of dining destinations, but that has changed in recent years during the Flower & Garden Festival. For starters, the Smokehouse has tapped into the domestic craft beer market better than what is usually offered at the pavilion, though the real draw the last two years has been pork. The Piggylicious Bacon Cupcake returned for the second year, and I think it was even better than last year. Part of my enjoyment may have been enhanced by the addition of Shipyard's Maple Bacon Stout, to pair with my cupcake.

Since that wasn't quite enough pork, I returned a couple days later to try the pulled pig slider. After being disappointed with the barbecue options last year, I am happy to say this sandwich was a winner. However, at $6.00, there are better options for this much food. I'll put this in the glad I tried it, but won't get it again category. 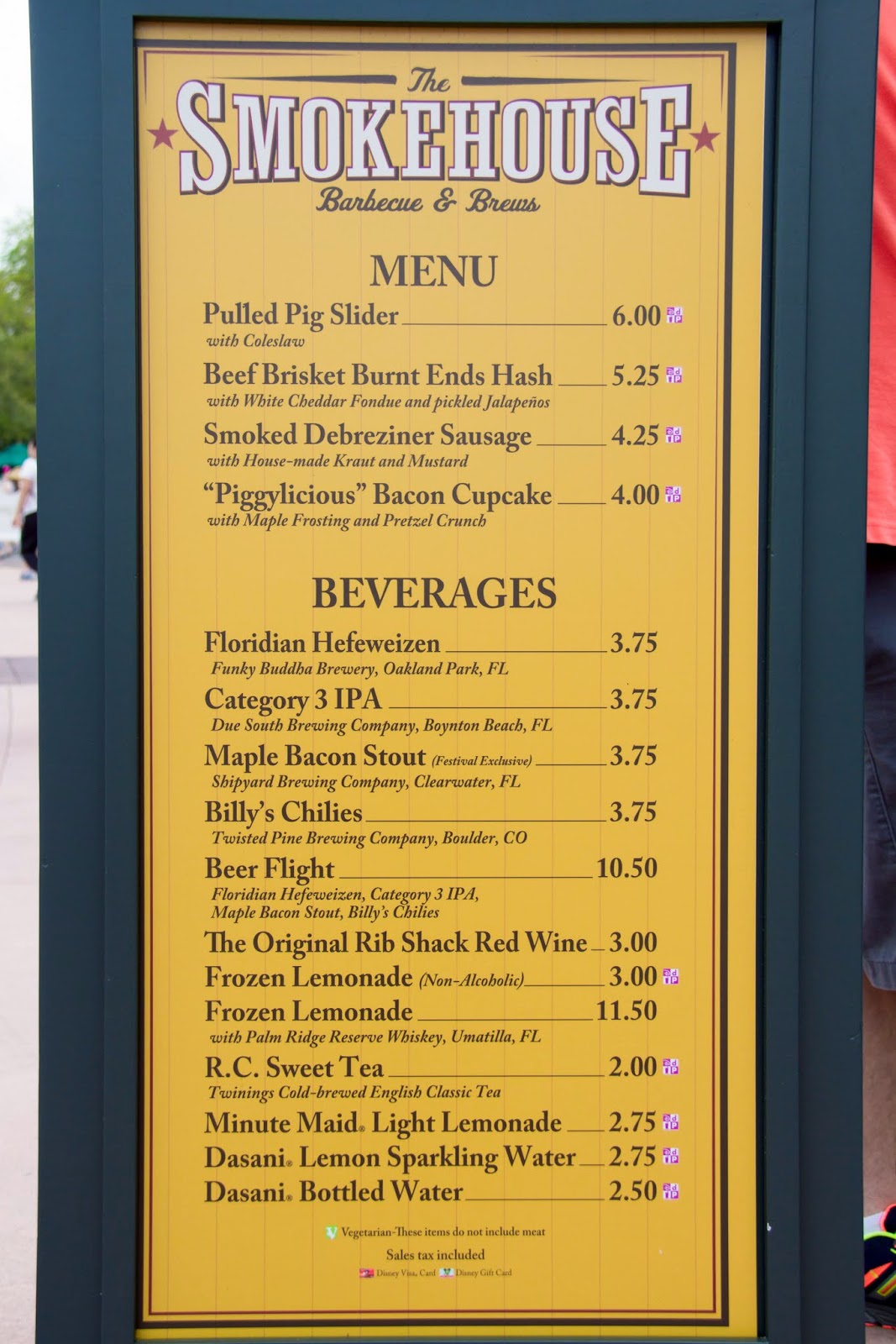 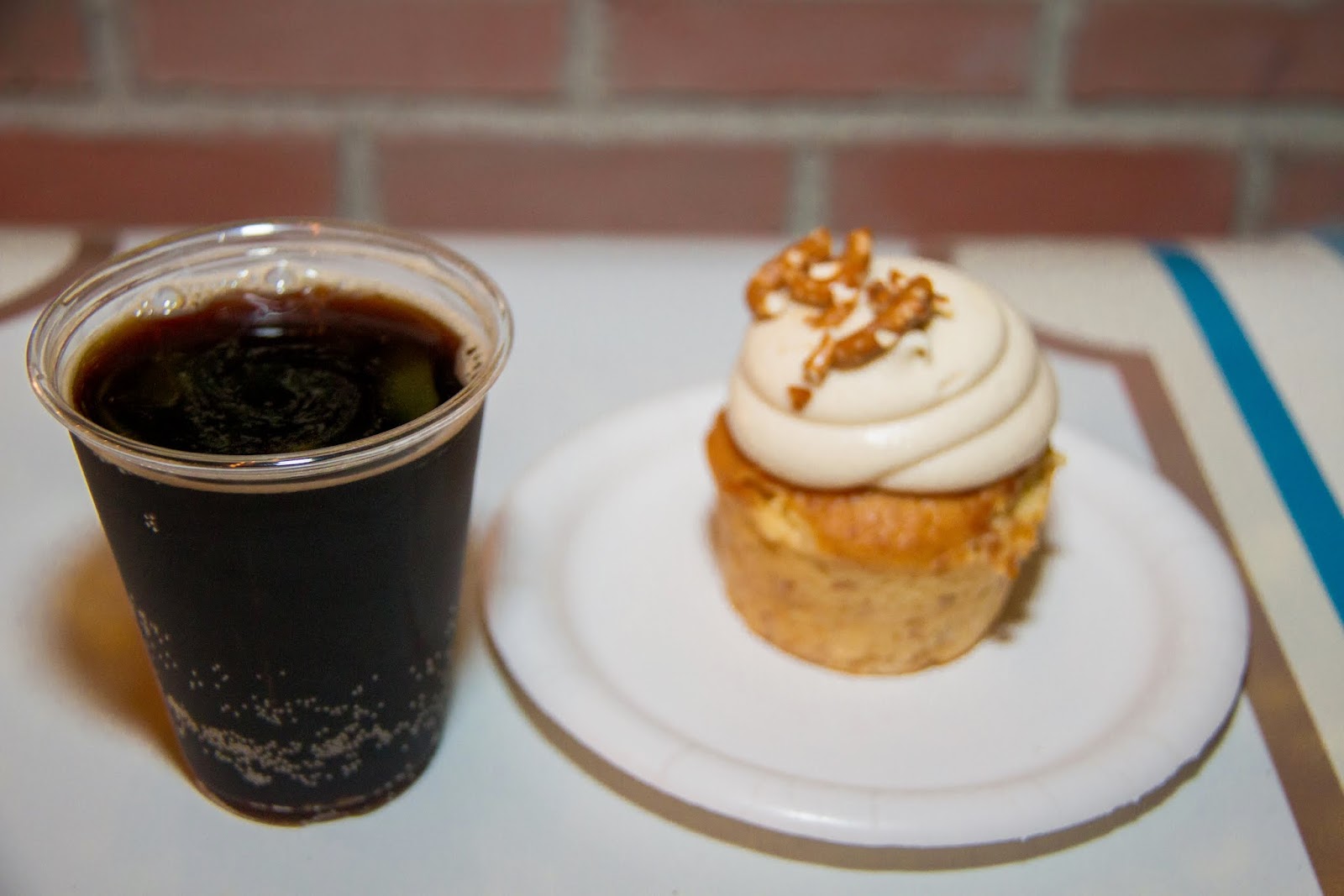 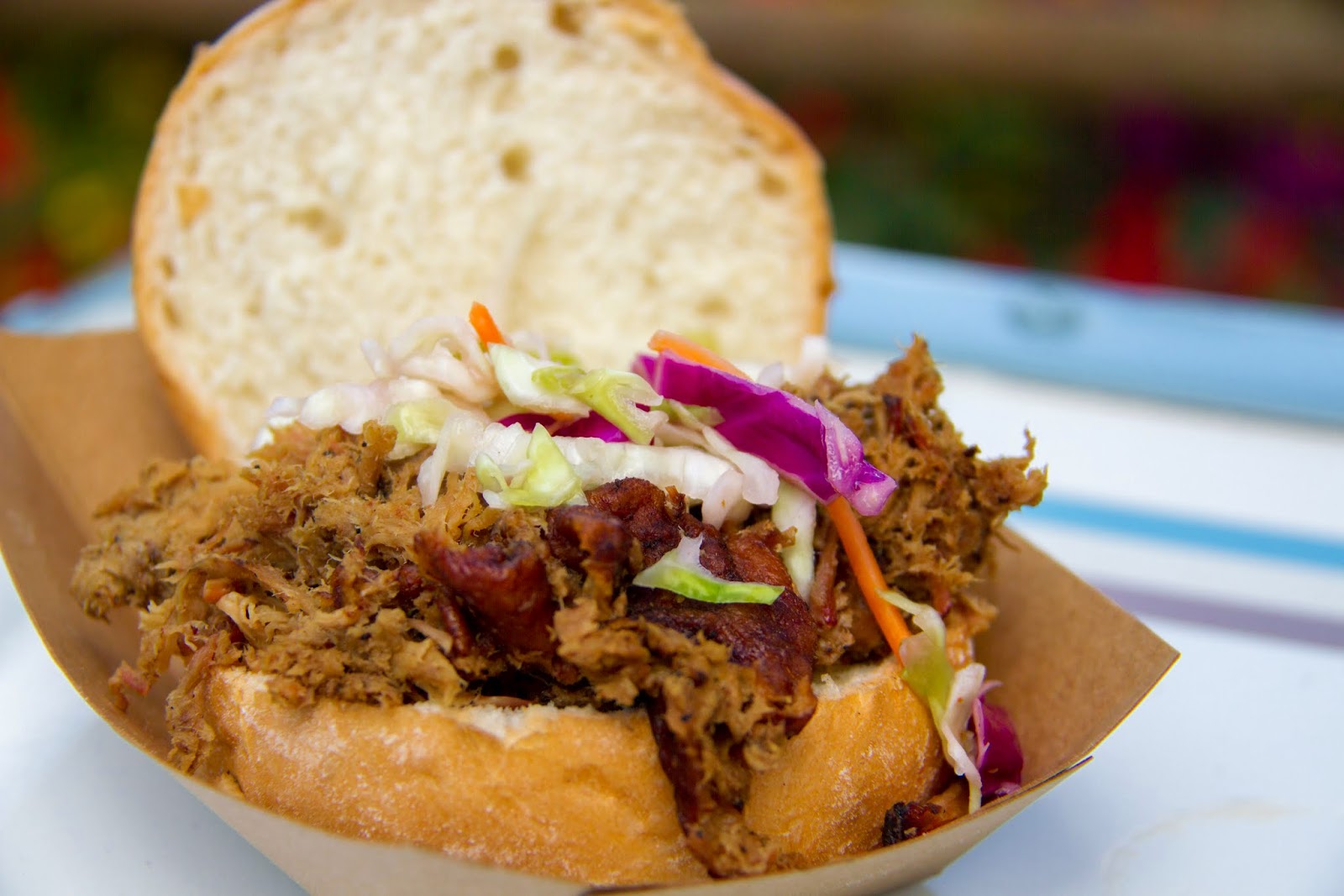 Japan Pavilion - Hanami
I was disappointed that the Temaki chicken roll from last year's Festival didn't make it back onto this year's menu, but was pleased with my selection of a Teriyaki curry bun. I've had other "bun" offerings in restaurants and found them far too bready, but after enjoying the Kung Pao chicken bun at the Lotus House I felt confident giving Disney's chefs a chance with this one, and was glad that I did. The steamed bun filed with chicken, vegetables, curry, and sweet sauce, was light and the flavors blended well. I could have eaten several of these, had I not wanted to sample other foods at the Festival. Also, had I wanted a full meal at the Japan pavilion, I would have been better off just ordering the chicken curry from Katsura Grill, but since the teriyaki bun was only available for a short time, I'm glad I got the chance to try it.

I've had my share of Kirin Ichiban, a somewhat nondescript lager that I enjoy, but that's always available in Epcot (or in local liquor stores), so I opted to try the strawberry nigori, a mild creamy sake infused with sweet tangy strawberry. The consistency of the beverage was somewhere between a "slush" and an ordinary cocktail, making it easier to drink than some frozen concoctions. I was looking forward to the strawberry flavor, but was somewhat disappointed by this drink. The taste, which is hard to describe, wasn't entirely unpleasant, but not not what I was expecting. 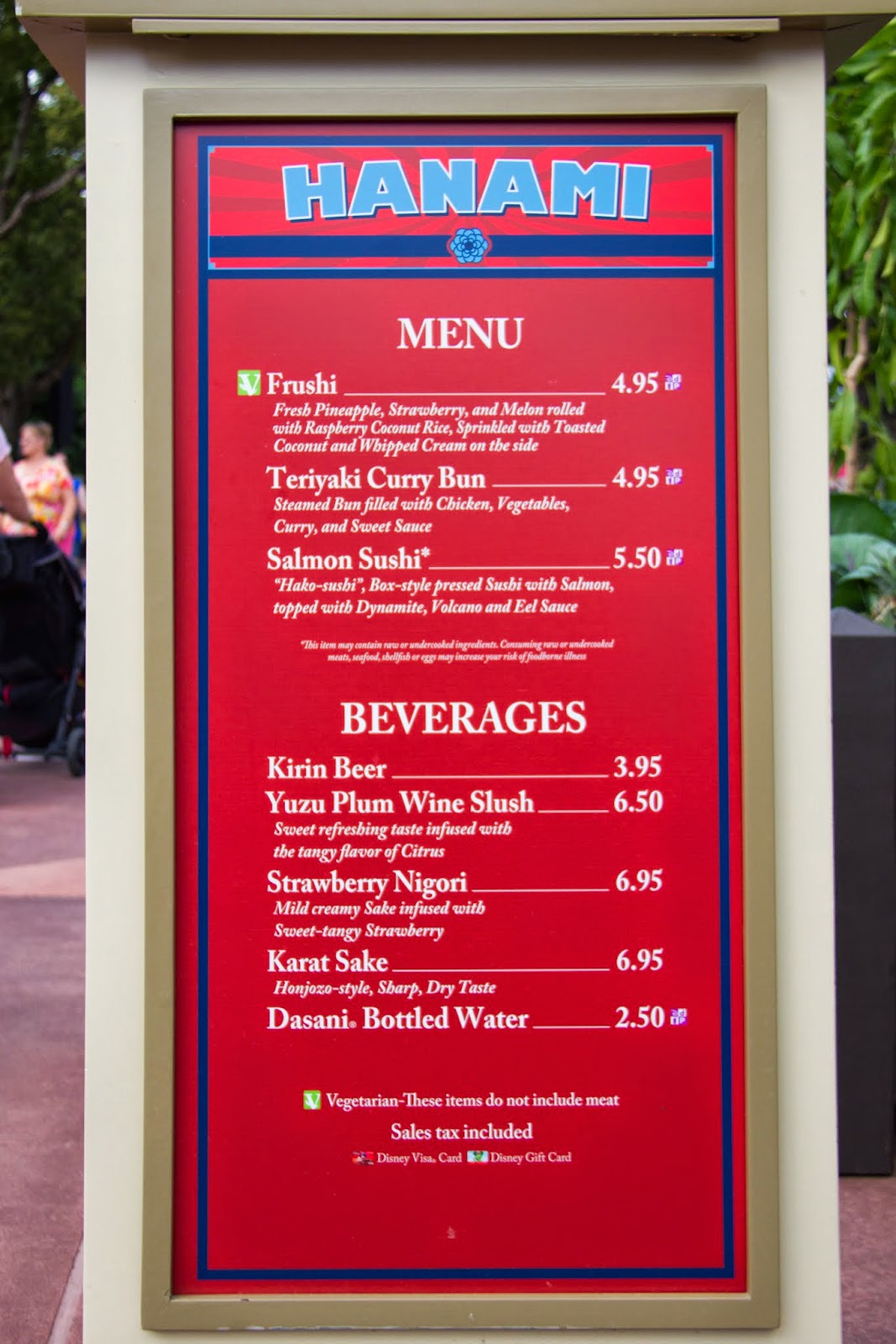 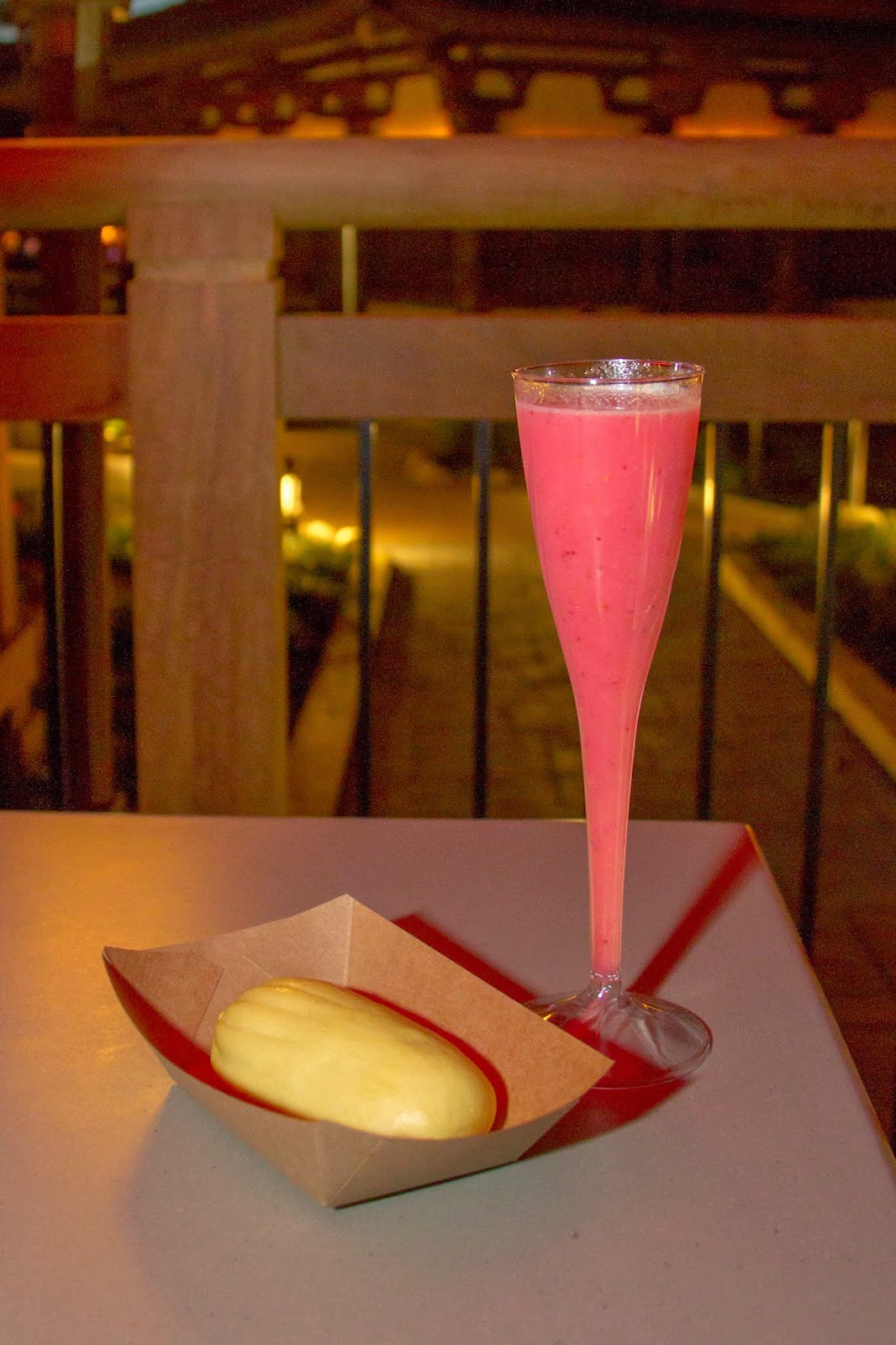 Morocco Pavilion - Taste of Marakesh
I did not eat anything at the Morocco pavilion this year. Two years ago I tried their lamb offering and thought it was too dry, and I heard reports of similar experiences with the chicken kabob this year. Unfortunately, I think this pavilion suffers from lack of volume, as so few people try the food that what is made ends up sitting around for too long. Casa Beer is also available year round in the park, so I kept walking. 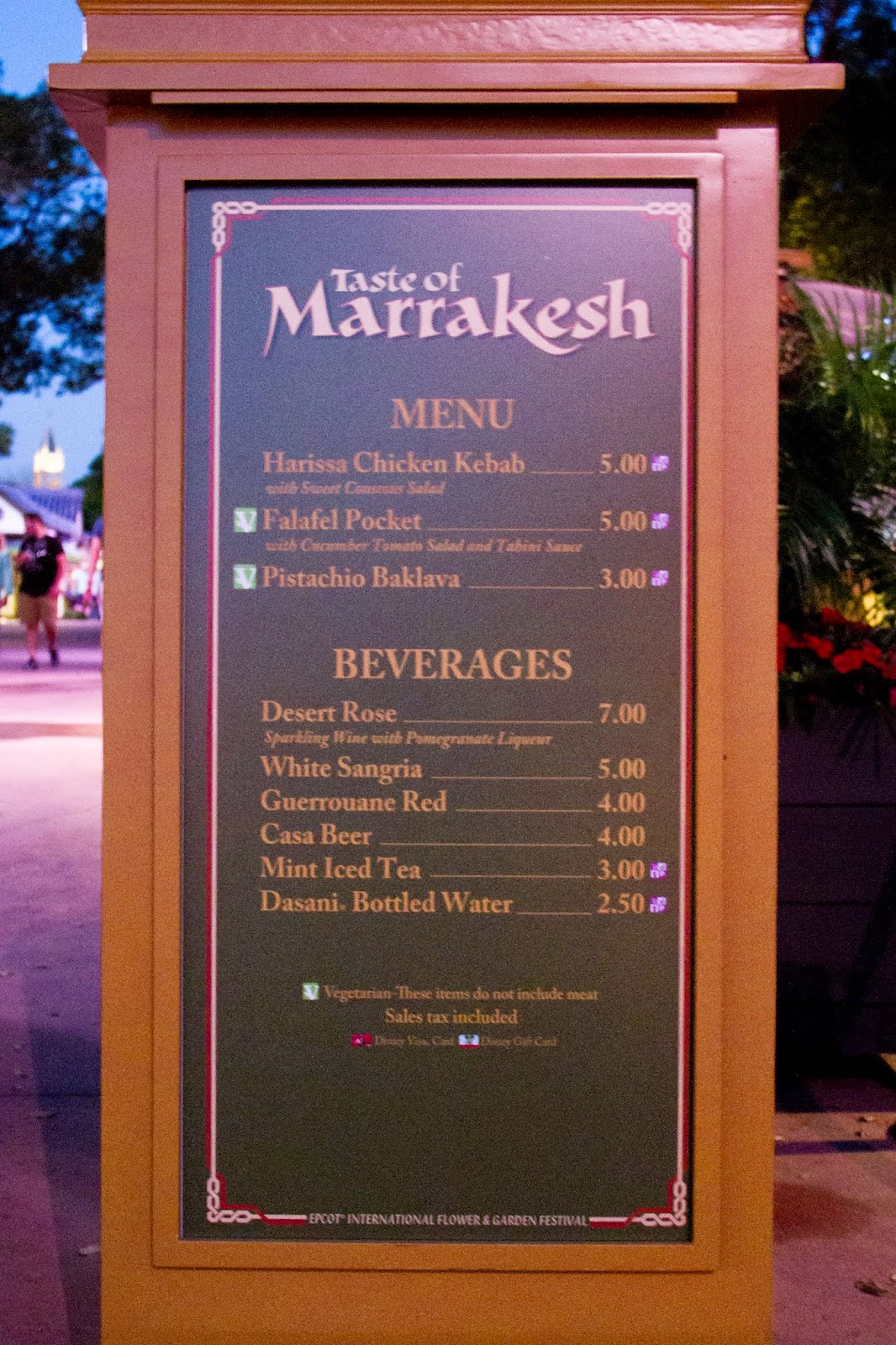 Botanas Botancio
The only new booth this year, Botanas Botanico featured Venezuelan-inspired offerings. I did not get the chance to try any of the food, but did drink a non-alcoholic La Tizana on my last day. This blend of a variety of different fruits (the description just reads "fruit drink") was very good, not very filling, and since it is made of fruit I believe it must be good for me. At $2.75 this was as close to reasonably priced as anything offered at this year's Festival and I couldn't justify paying $7 to add rum to the drink (and don't think that would have added to my enjoyment). 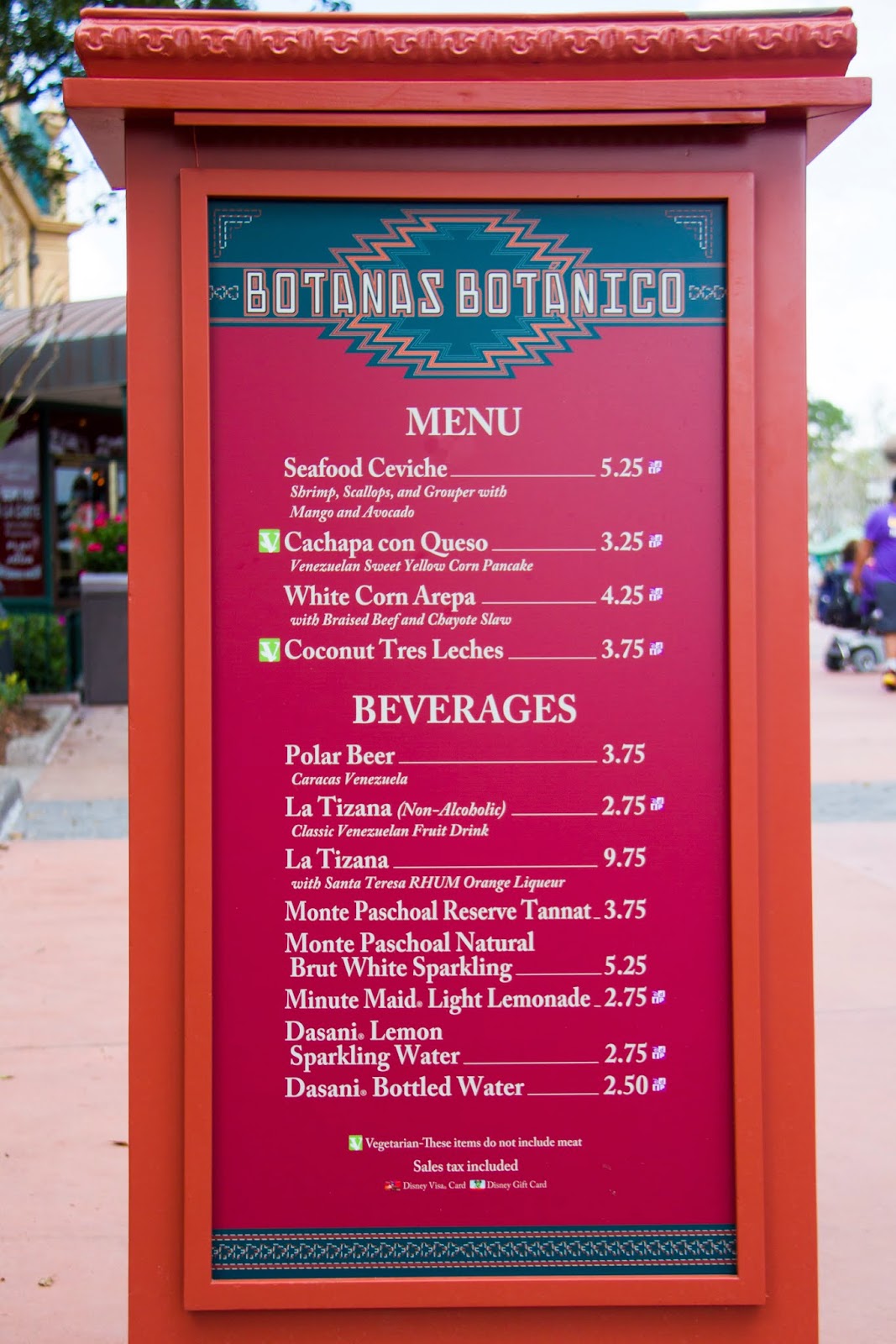 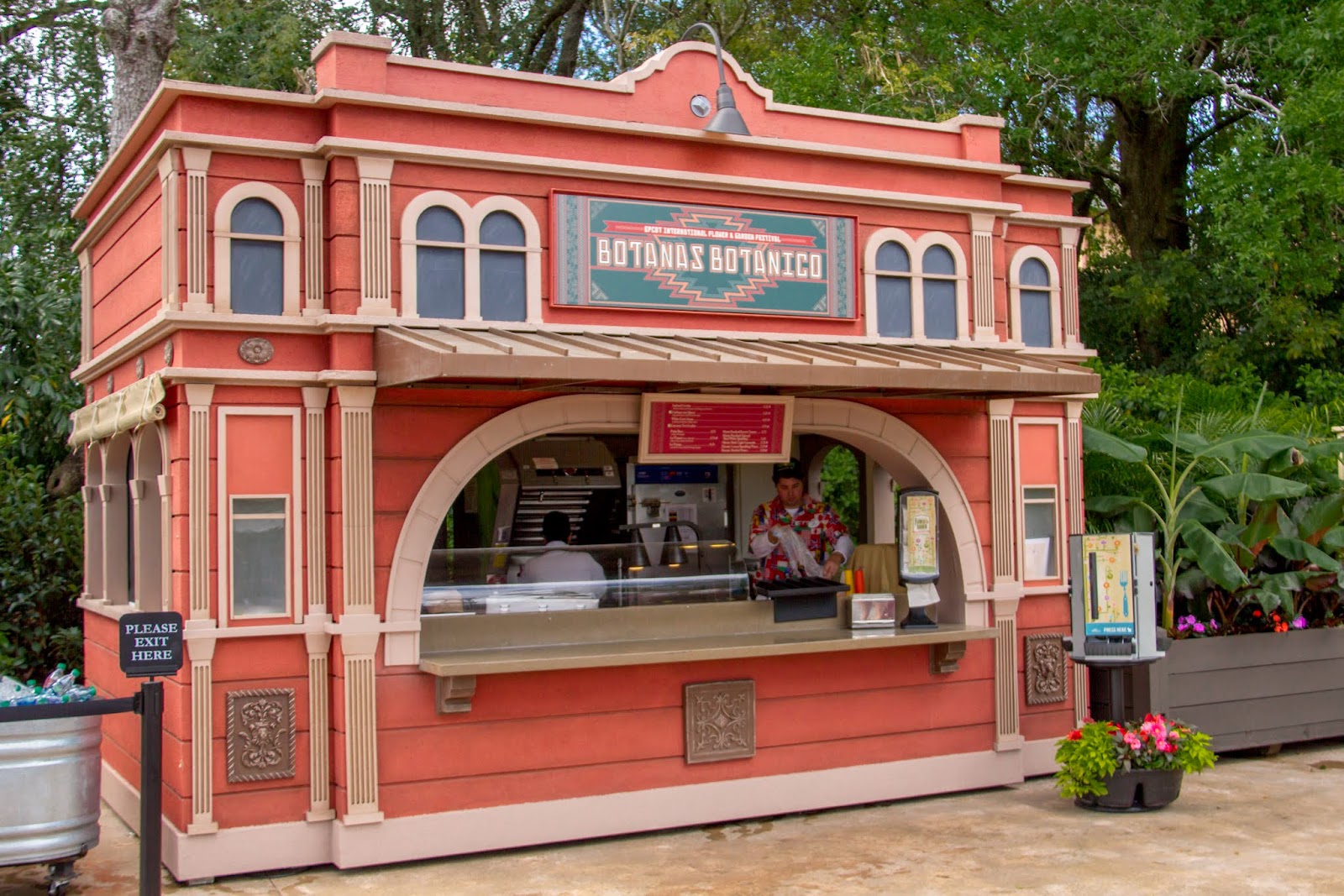 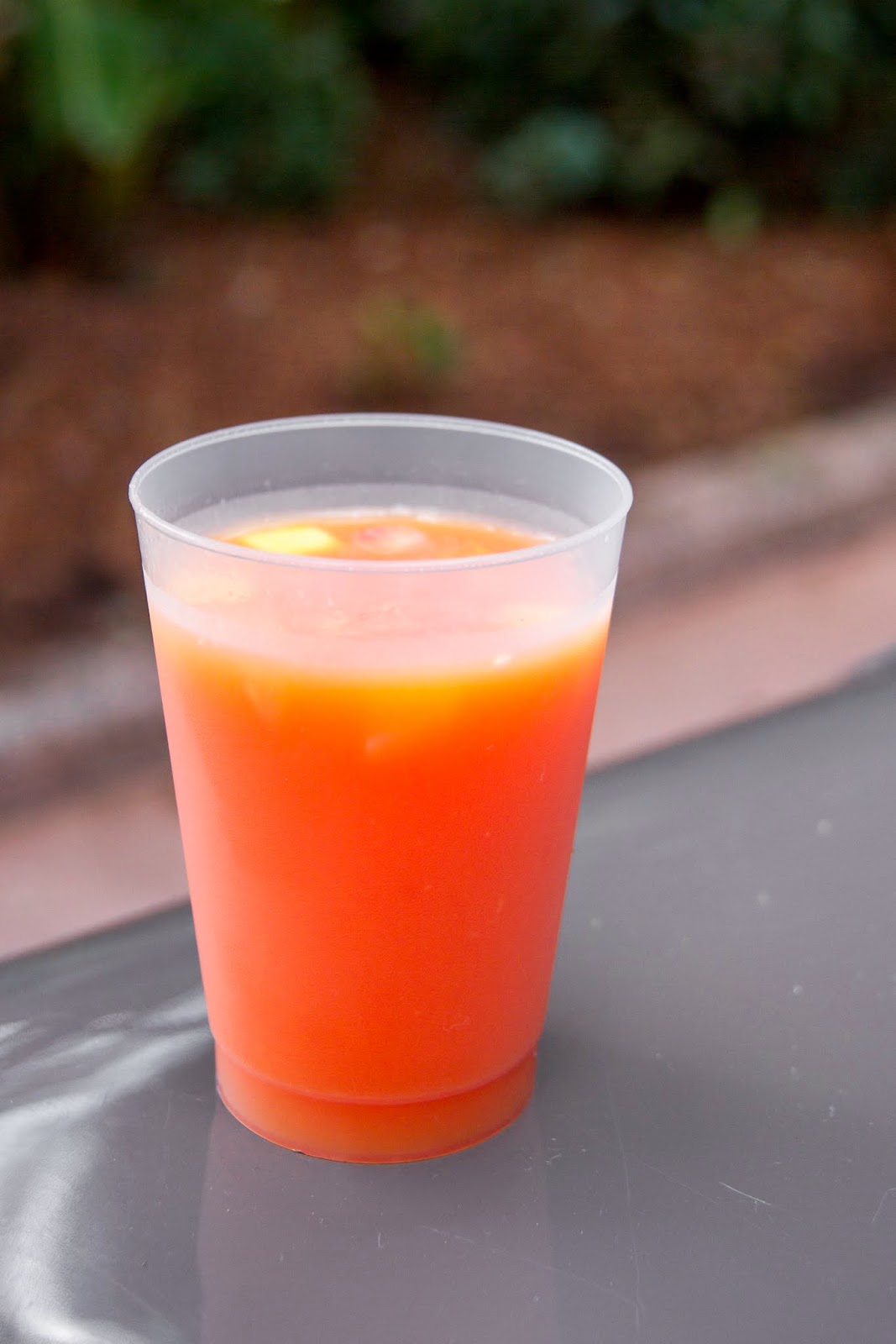 France Pavilion - Fleur de Lys
For the last two years I've been hoping to try the duck here, but haven't gotten around to doing so yet and I didn't make time to do so this year. I even forgot to photograph the menu, but I'll list the items here: 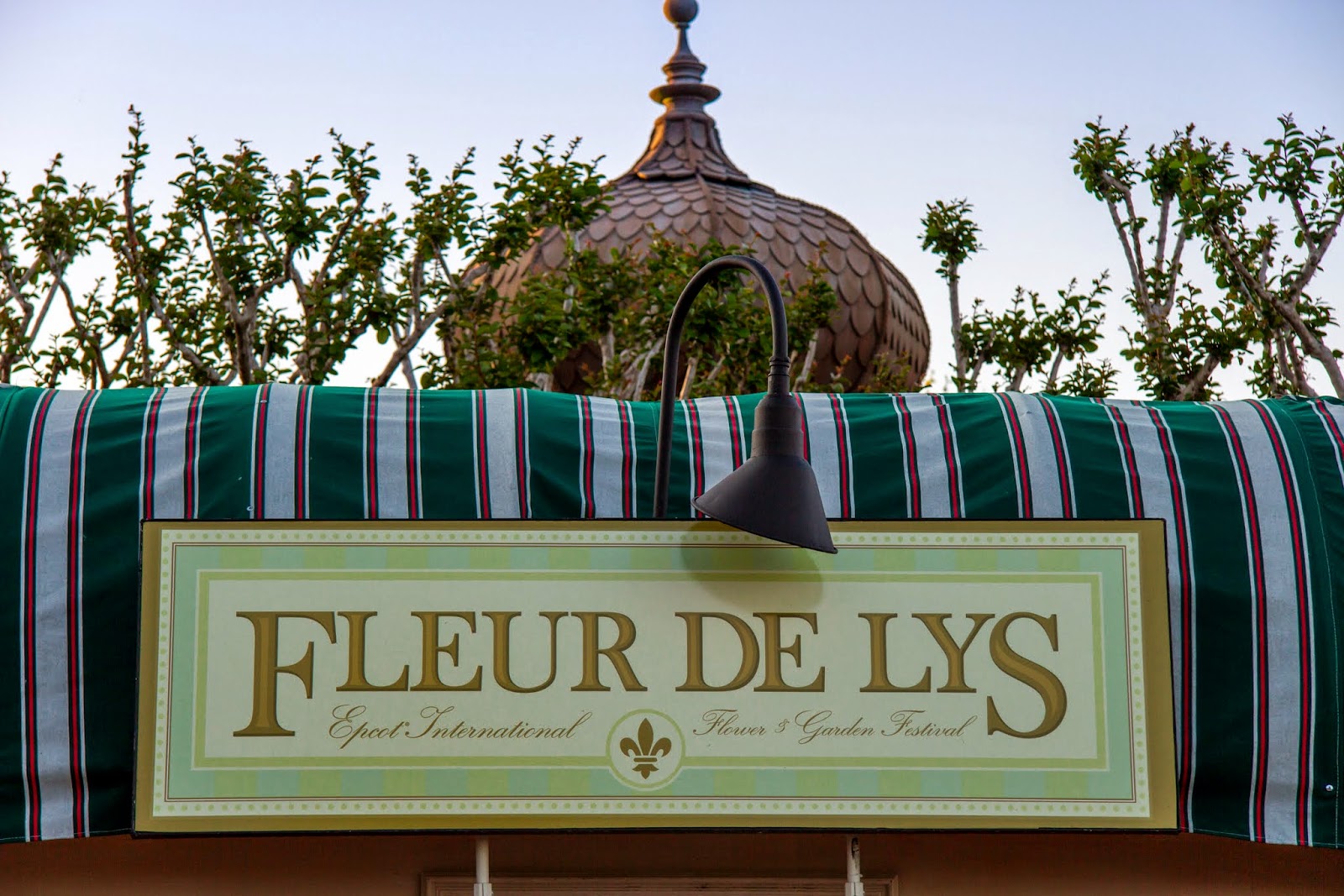 Pineapple Promenade
Having already tried the Dole Whip with rum (that for some reason they aren't calling Dole Whip this year) and without interest in the hot dog with pineapple this could have been a pavilion that I skipped. However, with the elimination of the English Outdoor Kitchen this year, Disney moved the Berry Tea Cocktail, Twinings mixed berry tea, Plant City strawberry-flavored Florida cane vodka, with raspberry and acai syrups, to this booth. What the Berry Tea Cocktail has to do with pineapples I don't know, but the drink is quite good. Sadly, having jacked the price up from $7.50 the year before to $9.75 this year I'll not be ordering this again anytime soon.

(NOTE: The Berry Tea Cocktail appears below in the photo with my tilapia from Urban Farm Eats) 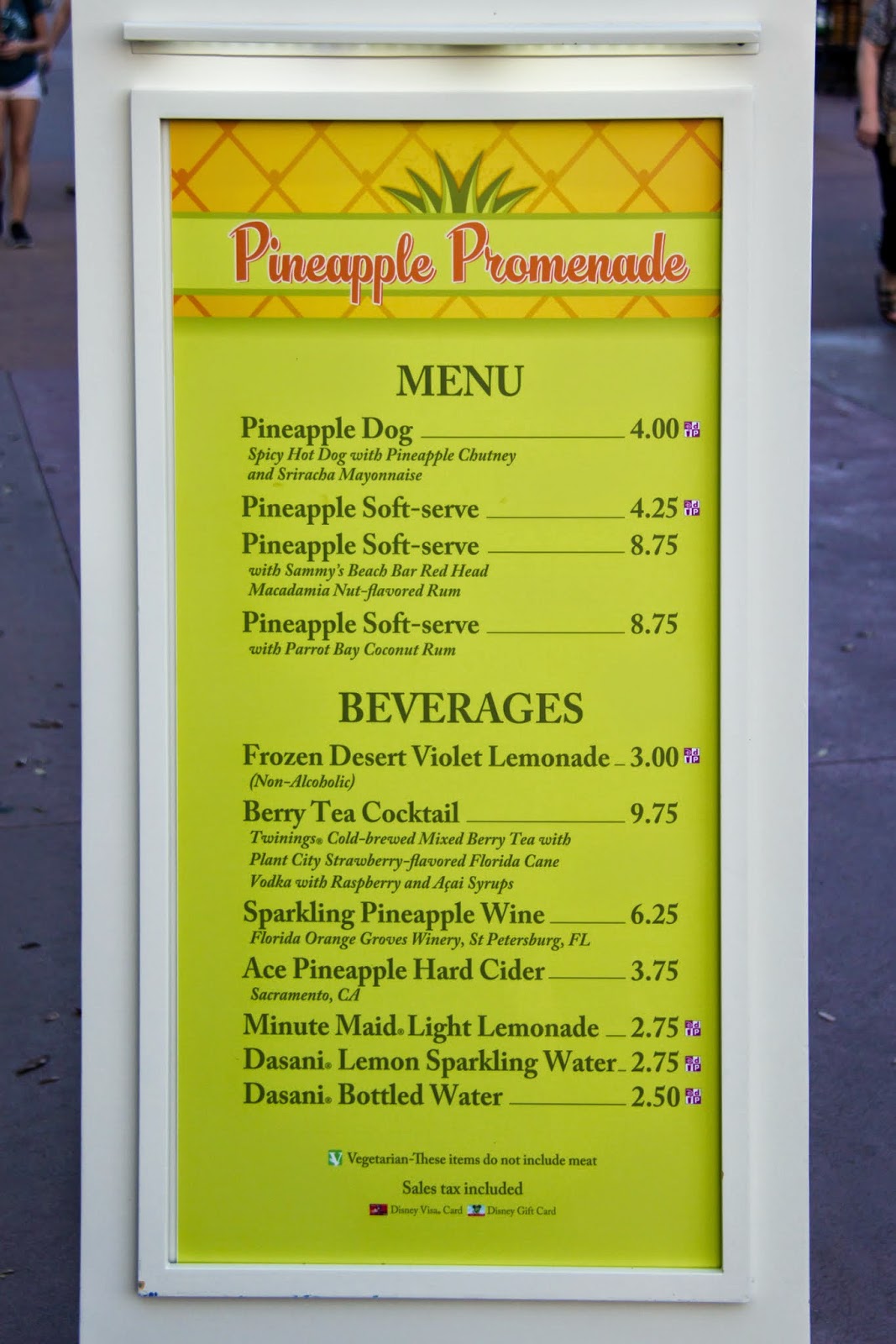 Most of the Urban Farm Eats offerings are a little too healthy for my liking, but I couldn't resist the ghost pepper-dusted tilapia with crisp winter melon slaw and main oil, so I made my way to this booth's out of the way location, on the pathway that leads to World Showcase from near the Imagination pavilion. The inclusion of ghost peppers may be a little scary to some, but I don't enjoy food that makes my eyes water and nose run, and this dish had a kick, but was not overwhelmingly spicy. It was actually one of the highlights of this year's Festival food offerings, adding quite a bit of flavor to what can be a bland fish. I'll usually skip the slaw, too, but it provided a nice compliment to the heat in the main course. Additionally, at $4.75 this was one of the better values among dishes I would consider a main course. 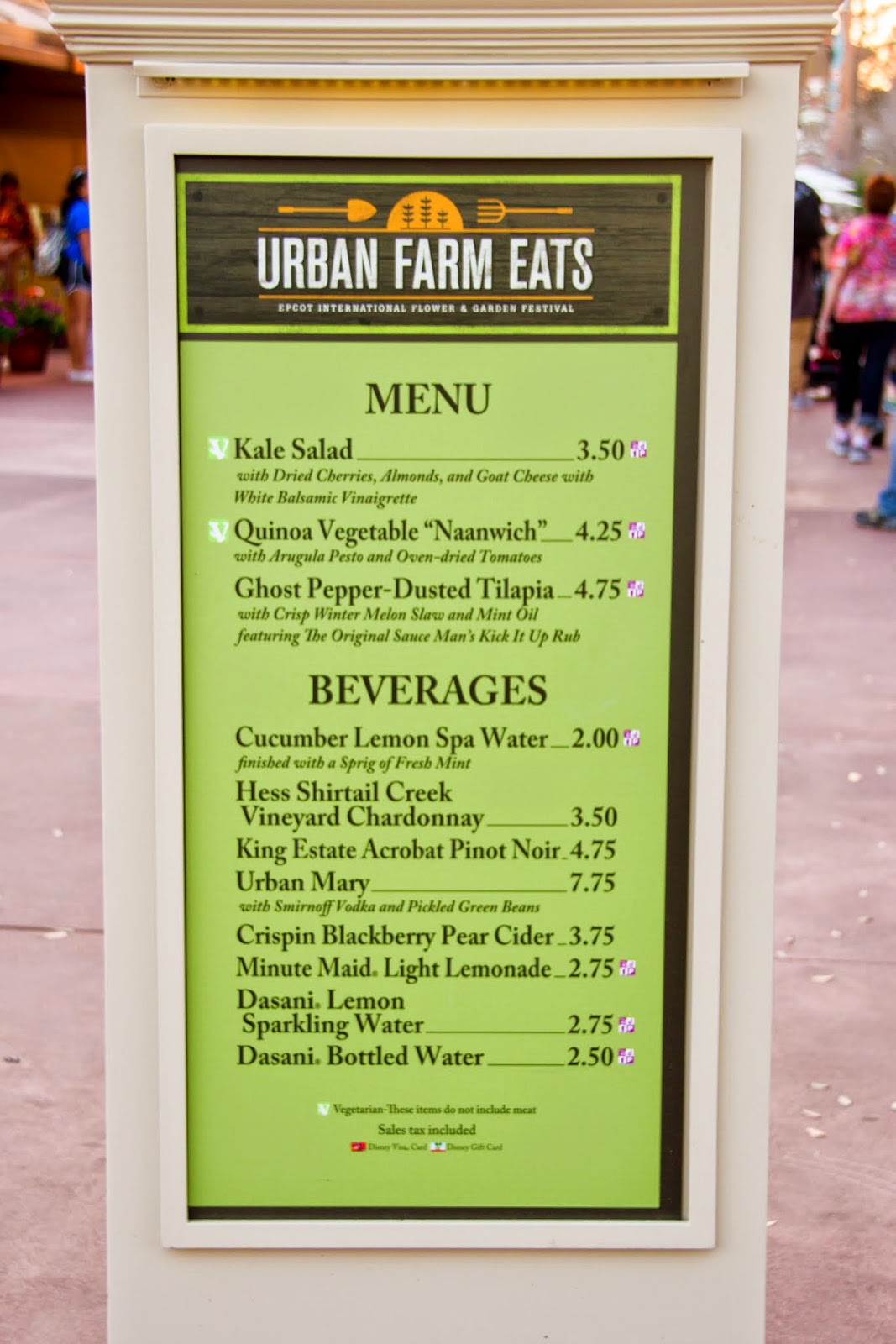 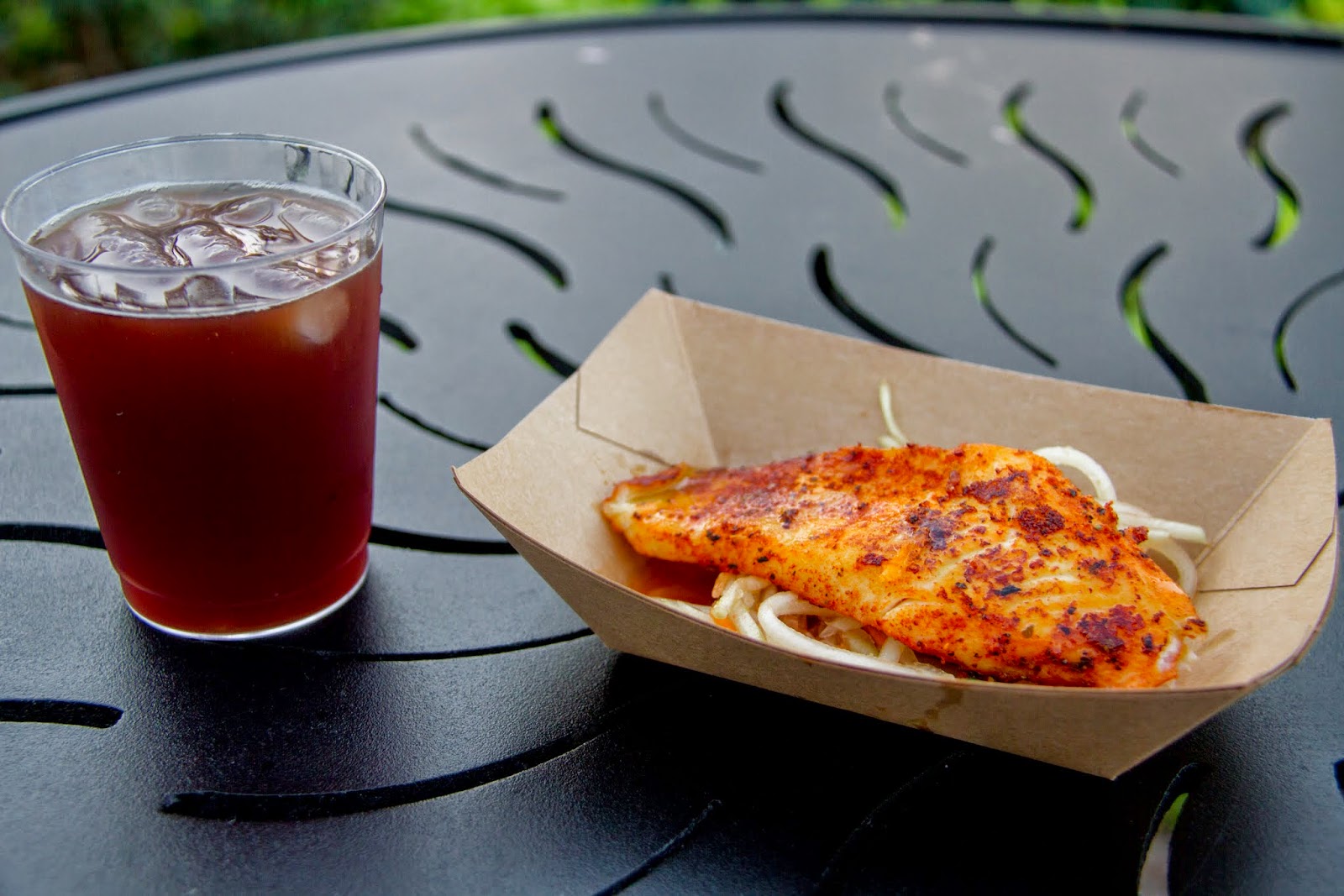 That's everything I ate at the 2015 Epcot International Flower & Garden Festival. What have you tried, or what are you looking forward to sampling this year?