Disney announced quite a few changes, some that you won't see for years into the future and some changes that you will see very soon. Let's take a look at what Walt Disney Parks and Resorts Chairman, Bob Chapek, announced in Anaheim at D23 Expo today.


Not Addressed at D23 Expo

While rumors persist about even more changes to Disney World in the years to come, not every rumor was address at the Expo. Some potential changes park fans have talked about in recent months and years that were not address include the following:

Quite a bit has already filtered through electronic media in recent months about the new Star Wars addition to Disney's Hollywood Studios and Disneyland. Today, enough was officially announced that I wrote a separate post detailing the Star Wars announcements.

Not much that wasn't already known was revealed about this resort, but I have included what was shared in a separate post detailing the Star Wars announcements from the Disney Parks presentation.

Imagineer Kevin Rafferty spoke about the first ride through attraction dedicated to Mickey Mouse. Mickey and Minnie’s Runaway Railway will replace the Great Movie Ride in Chinese Theatre at Disney's Hollywood Studios, taking you into a "two and a half D" world of a cartoon. Mickey and Minnie will appear in the style of recent cartoon shorts, a throwback of sorts to Mickey's origins in his earliest appearance on screen. Goofy will also appear as the engineer of the locomotive, which probably accounts for why this railway will be the "runaway" variety. The Great Movie Ride will close at the end of the day on Sunday, August 13, 2017. 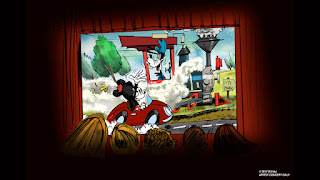 Despite Mickey's diminutive stature, Rafferty described the forthcoming attraction by saying, "this is not going to be a small attraction, it’s going to be game-changing." Given the size of the show building, the importance of Mickey Mouse to the company, and the location of the Chinese Theatre at the focal point of this park, it sounds like it will, indeed, be something special, though it's not clear what the ride experience will be. Rafferty did promise "more hidden Mickeys than any attraction anywhere in the universe." 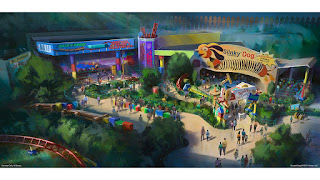 Toy Story Land was announced some time ago and there's been concept art posted on the construction walls around its future home in Disney's Hollywood Studios for quite a while. The news today was that it will open "next summer." The land will feature Slinky Dog Dash, what Disney describes as "a family coaster attraction," and Alien Swirling Saucers, which appears to be a better-themed version of a Scrambler-type attraction. Neither of these additions to the park appear to be headliner attractions, but both appear to appeal to all-ages, which should increase the appeal of the Studios to children.

D23 Expo guests viewed a short video showing "reconnaissance" of the new area by Sarge from Toy Story. There was no mention in the presentation or subsequent press release of any dining or merchandise locations within the new land. 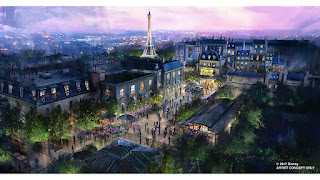 An attraction similar to Disneyland Paris' Ratatouille: The Adventure will be added in what Imagineer Tom Fitzgerald described as "a new space" adjacent to the France pavilion in Epcot. Guest will be shrunk to the size of Remy in what appears to be a 4D experience. The Ratatouille attraction in Paris uses a trackless ride vehicle, which should bring a fun, unpredictable family-friendly experience to World Showcase. The official release from Disney Parks says, "The attraction will expand the pavilion," so it appears that nothing will close as a result of this change. The attraction is set to open "by the 50th anniversary of Walt Disney World Resort in 2021."

Tom Fitzgerald briefly mentioned that a new film will come to the China pavilion in Epcot's World Showcase. Disney has created a new digital Circle-Vision camera system that will allow a seamless presentation that past Circle-Vision movies were not able to offer. While it was not directly stated during the presentation, it seems likely this new film will eventually replace the current Wonders of China film.

Epcot: Guardians of the Galaxy

Fitzgerald announced a "new E-Ticket attraction based on Guardians of the Galaxy" will be coming to Epcot in the space currently occupied by Ellen's Energy Adventure. This attraction will be different from the Guardians of the Galaxy: Mission Breakout attraction that recently opened in Disney's California Adventure. The current Universe of Energy pavilion will close at the end of the day on Sunday, August 13, 2017. The new attraction is set to open "by the 50th anniversary of Walt Disney World Resort in 2021."

Without revealing details of what this new ride experience will include, Fitzgerald described the new Guardians attraction only in general terms, as "more timeless, more relevant, and more Disney." Imagineers created a tenuous connection to Epcot's past by announcing Peter Quill, one of the Guardians of the Galaxy, visited Epcot as a child before his adventures across the galaxy.

When Mission Space re-opens in Future World next month it will include a second separate ride experience. The "Green" Mission will now "be an [earth] orbital experience" that "younger kids can join." It is unclear whether we will see any changes to the existing "Orange" Mission, but adding a distinct and presumably less-turbulent experience was an expected and likely-welcome change to this attraction.

In another effort to bring life back to a floundering pavilion, a new table service restaurant will be added next to Mission: SPACE. The setting for your meal will be somewhere "above the earth" and it appears that large windows (somewhat like the Coral Reef restaurant) will offer diners a look out into space. No details were offered about when the restaurant will open, but Disney's press release did say it will be operated by the Patina Restaurant Group, who also run Tutto Italia, Via Napoli, and Morimoto Asia.

The TRON Lightcycle Power Run from Shanghai Disneyland is coming to the Magic Kingdom "in a new space next to Space Mountain." Disney's official announcement describes this as "a coaster-style attraction where riders board a train of two-wheeled Lightcycles" and adds, "it offers access into the energy, lights and excitement of TRON’s high-tech universe." The light cycles are somewhat similar in shape to what visitors to Pandora's Flight of Passage may be familiar with, though the ride experience is very different. This is a fast-paced coaster style attraction that has drawn rave reviews from many guests in Shanghai and an exciting addition to the Magic Kingdom.

In recent weeks, some blogs fueled rumors that this attraction would replace the Tomorrowland Speedway, but given the way Chapek worded his announcement and the description of the location as "an entirely new area right next to the Space Mountain," it appears that nothing will close to build this attraction. It appears that it will sit mostly in on the opposite side of the Walt Disney World Railroad track, in an area currently occupied only by trees. Chapek announced the attraction will "open in time for the 50th [anniversary of Walt Disney World]," which means no later than October 1, 2021.

While many of today's announcements were confirmation of stories that had leaked in recent months, this one came completely out of the blue. A new theater will be built on Main Street USA in the Magic Kingdom. The outside of the theater will be built to resemble the Willis Wood Theater in 1920s Kansas City, Missouri, intended to evoke a place where Walt Disney began his career in animation. What guests can expect to find inside the theater was not announced, though Chapek likened it to the Hyperion Theater in Disney's California Adventure, which is currently running a show based on the animated film Frozen. It does not appear that this theater will replace any existing buildings on Main Street.

Chapek said very little about this new Disney Vacation Club resort, except that it will include a top floor restaurant with views of nighttime spectaculars in Epcot and Hollywood Studios. This appears to be the official announcement of a long-rumored DVC addition to Disney's Caribbean Beach Resort, though with a different name and it appears it will operate as a distinct resort. The folks at DVCNews.com have a pretty thorough summary of exactly where the resort will be located and everything else we know at this point.

A Disney press release adds some detail, noting the resort will include "300 units spread across a variety of accommodation types." The release also adds the expected opening date of Disney's Riviera Resort to be during fall 2019.

Chapek announced what is officially described as a "new transportation service featuring vehicles themed to the one-and-only Minnie Mouse." Chapek added that this would be "a new point-to-point transportation service." How exactly this will work in unclear at this time, but a Disney press release says that guests will request this transportation from their smartphone "and a Disney Cast Member will drive them wherever they want to go around Walt Disney World." In recent years, speculation has indicated Disney wanted to offer service similar to what guests experience with ride-sharing services like Uber and Lyft (or, more specifically, they wanted to cash in on offering a service of their own).

While no other details were announced during the Expo, the red and white polka-dotted vehicles have been spotted on Disney World property in the days following the announcement. Thus far, Disney has stated that service will begin "later this month" for guests of the Boardwalk, Yacht, and Beach Club resorts. Rumors persist that cars will be reserved using the Lyft smartphone app and the cost of the service will be a flat rate of $20, but Disney has yet to confirm the price or partnership with Lyft.

Plans for a gondola system connecting Epcot and Disney's Hollywood Studios to some nearby hotels have been floating around for the past couple months, but Disney finally made that news official today. The gondola system will be known as Disney Skyliner and in addition to two theme parks, it will also serve Disney's Art of Animation, Pop Century, Caribbean Beach, and new DVC Riviera Resort. The opening date for the Skyliner was not announced

The Skyliner will stop near Epcot's International Gateway entrance. There was no word where this will connect with Disney's Hollywood Studios, but that will likely soon be apparent when construction in that area begins. The concept art suggests these will be enclosed vehicles, which presumably means they will also be climate controlled. Chapek announced that some gondolas will include Disney characters, but it was not clear what that meant.

Outside of Disney World

Bob Chapek announced quite a few changes outside of Disney World. Since our focus here is on the Florida parks, I will not cover those in much detail, but since those items may be of interest to some readers, I will mention them. Other new things coming from Disney Parks and Resorts in the years to come include the following: