[ED NOTE: Revised because I had omitted World of Color from my "must do" list, since a viewing was part of our tour, but it should be part of the list.  I also moved some items around thanks to the advice of Seth Kubersky and Guy Selga] 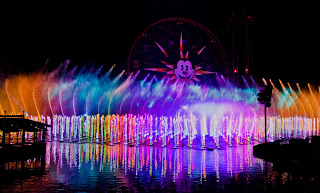 I'm going to Disneyland!  Just about four months ago, as I watched Cars Land open its doors I decided I finally had to see Disney's west coast park for myself.  The seeds for this idea were planted the year before when I first saw videos of World of Color, perhaps Disney's most innovative and spectacular nighttime performance, then seeing the landscape of Cars Land and the ride videos from Radiator Springs Racers inspired me to study Disneyland in greater detail.  I knew that park had history on its side, but I also found an impressive array of attractions packed into a relatively small space, giving the California parks a remarkable "fun density."  The only question was when I could find time to visit and who I could convince to make the trip with me.


Everything fell into place rather quickly when I learned about the Backstage Magic tour, offered by Adventures by Disney.  I'll cover the tour in detail later, but this seemed like the perfect opportunity for my father and me to travel to Disney's Southern California parks, along with some other locations that we couldn't just walk off the street to see, like the Jim Henson Studios and Walt Disney Imagineering.  As excited as I am for the tour and getting to see Disneyland and Disney's California Adventure, the constraints of the tour present some unique planning challenges.  Since Todd has been talking about planning in the context of our recent trip to Disney World, I thought it may be useful to share my thoughts in preparing for this trip out west.

When going on vacation I like to have a plan, or at least a rough idea what I want do each do while away.  Generally, most items on the plan won't be carved in stone (except sometimes for prepaid items, some tours or dinner reservations , or other items that may require advanced planning or would be difficult to reschedule), but at least I'll have an idea what I want to do.  This begins by brainstorming a list of things I want to do, then prioritizing that list.  This post covers the brainstorming steps.

As I've studied Disneyland I realized that there any many more differences in the park and Disney World's Magic Kingdom than I originally realized.  Thus, my priority will be to see things I can't see in Florida, but hopefully still with time to see some favorites that are also available back east.

Our Adventures by Disney tour includes a dinner at Steakhouse 55 and breakfasts at Goofy's Kitchen and Storyteller's Café on different days.  Some other meals are listed as "provided" without a location specified.  From what I can tell, we'll be on our own for two lunches and one dinner during the tour, then lunch and dinner when we stay in the parks the day the tour ends, and there may be time for lunch before leaving for the airport on our last day.  I will be traveling with my father, so I want to choose places that both of us will like (for example, the Blue Bayou gets good reviews, but my father doesn't like anything he perceives as "Cajun", so a New Orleans bayou themed restaurant won't appeal to him).

I've organized this list from "must dos" (shows and rides that I would be disappointed if we didn't see) and into other categories in declining order of interest.  The idea is to see things that are unique to Disneyland or where attractions are not exact duplicates of what I've seen in the Magic Kingdom.

So, that's what I want to see.  We'll see how everything works out in California.  I know I'll have fun no matter what, but thought it would be interesting to share my thinking before leaving home.  What do you think?  Do any Disneyland veterans have any suggestions for other things I should do? or, things that I should skip?
Posted by Bob R at 3:44 PM