This afternoon, the Disney Parks Blog hosted a live chat with Walt Disney Imagineering Creative Director Chris Beatty.  Beatty, the "overall creative director of the New Fantasyland expansion," answered questions, mostly submitted through the blog post announcing the event or from the moderator, along with a few questions from those watching live.  The presentation highlighted the new restaurants of New Fantasyland, briefly discussed the new Little Mermaid ride, and ended with a few other topics.  Below is a summary of what was covered.

Be Our Guest Restaurant

The presentation began with a video featuring imagineers talking about the Be Our Guest Restaurant. 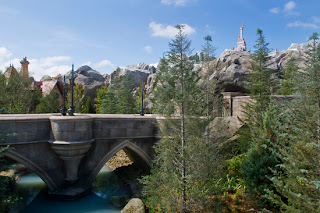 As you first see Beast's Castle, imagineer Tim Warzech suggests, "when you're at a distance we really want you to see that you're being drawn to the castle itself."  Then, the story continues as imagineer Ted Robledo says you, "have to cross that iconic bridge, guarded by gargoyles along the way."

All of the imagineers, in the video, and during the chat seemed required to use the word "foreboding" to describe your entrance to Beast's Castle.  Above the doorway is a mosaic that tells story of Beauty and the Beast, but most of the rest of your introduction to the castle should evoke a feeling of trepidation, similar to what Belle would have felt when she first approached Beast's home.  Chris Beatty described the West Wing in detail during the chat:

The West Wing is meant to feel like any minute you’re in there that the Beast could come busting in the door. There’s a sense of foreboding to the room - the ambiance is very dark and heavy and it really takes on the personality of the Beast. You get this sense that you’re trespassing in some place you should not have been. 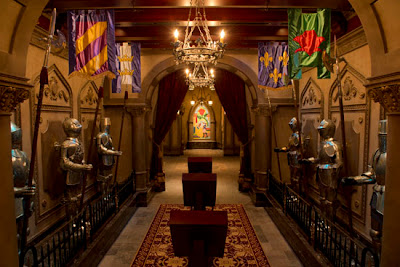 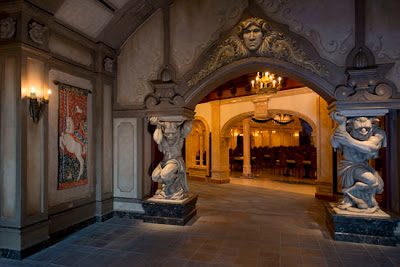 This portrait of the prince changes to Beast when all of the petals from the Enchanted Rose drop. 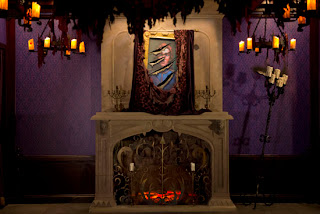 The "Rose Gallery" dining room will include a jar "in front of a set of windows that have a nighttime effect and as the storm approaches, the windows change color."  That room will also feature a large music box in the center of the room, that is designed to look like it was built by Maurice as a gift for Belle and Beast.  The designs for this music box are supposed to be visible as part of Maurice's Workshop, as seen during Enchanted Tales with Belle.  The music box will play periodically.  During the video, imagineer Warzecha suggests everyone look up to see the stained-glass rose above the music box, as it is a detail that could easily be overlooked amidst the impressive surroundings. 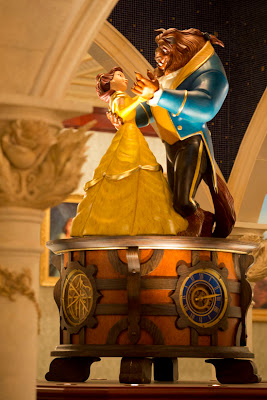 Inside the restaurant, portraits and tapestries on the walls feature Belle and Beast, along with their enchanted friends.  This will be the only place where you see those characters in the restaurant, as Beatty noted, "there are no current plans to have a character dining experience."

Inside Gaston's Tavern, look for the fist marks on the wall from the brawl that just ended.  There will also be "some fun hidden elements hanging from some of the antlers as if a party just ended."  Beatty also added that "there’s one more element that’s missing from Gaston’s Tavern that will ‘sit’ next to Gaston’s portrait," but did not offer any further information about what that might be. 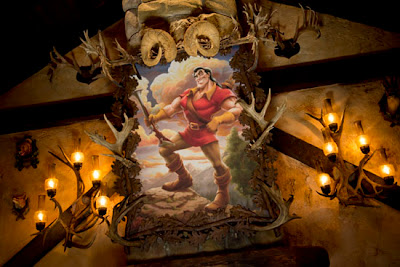 Under the Sea ~ Journey of the Little Mermaid

In describing the queue for The Little Mermaid, Beatty noted, "it's important for us to start the story as soon as you approach the attraction."  Those who have seen the attraction thus far have been impressed with the detail you see while waiting in line and the ability to subtle interactions with the crabs that help Ariel organize her belongings.  Beatty said that the story of the Mermaid attraction in the Magic Kingdom is "identical" to that in Disney's California Adventure, but guests "will notice subtle differences throughout."  As an example, Beatty described fog in the cauldron of Ursula's Lair.  Beatty also shared a picture of the submarine from 20,000 Leagues Under the Sea carved into the rock work before you enter Ariel's grotto. 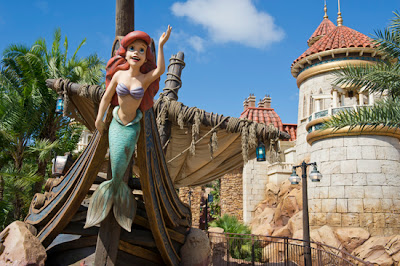 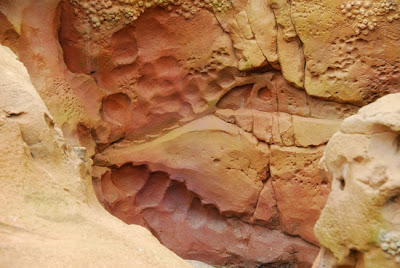 You can read the chat in its entirety by following this link and clicking the “Replay” button: http://disneyparks.disney.go.com/blog/2012/10/live-chat-talk-new-fantasyland-with-imagineer-chris-beatty-at-2-p-m-edt/