Backstage Magic at the Chinese Theatre in Hollywood

Fans of the Academy Awards may want to visit the site where their favorite celebrities walk down the Red Carpet each year, but only steps away from the Dolby (formerly Kodak) Theater is a far more interesting and iconic building that was once the home of those Awards.  The Chinese Theatre, for years known as Grauman's Chinese Theatre in honor of its founder Sid Grauman, has always been a highly sought out location for Hollywood movie premieres and was the first theater to host the Academy Awards ceremony, after the event outgrew the hotel ballrooms where it was originally held.  The Chinese Theatre is also known for its Forecourt to the Stars, home of celebrity hand and footprints.  I had the chance to tour the Theatre in October, as part of the Adventures by Disney Backstage Magic tour.

The Theatre's Lobby Announcer, Levi Tinker, greeted us in the Forecourt, where our tour group had taken some time to explore the marks celebrities ranging from the voice of Donald Duck to the cast of the Harry Potter movies have left their marks for generations.  Levi took us through the lobby and into the main building, where he offered a brief history of the origins of the Theatre before taking us into the seating area.  The history of the property is reasonably well documented on the Theatre's web site and Levi fired out facts faster than I could write them down, so my attempt to tell the site's history will be far less complete than what you can read elsewhere.  What I can tell you is that Theatre is a significant part of Hollywood history, having hosted premieres, as a shrine to the luminaries who have brought films to the public for many years, and even as a location where movies continue to be filmed to this day.  Our tour touched on all of those elements. 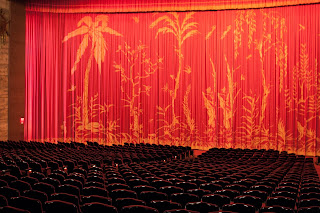 When we finally entered the seating area, we sat in rows R, S, and T, where actors, directors, and others prominent people involved in a movie's production would sit for a film's premiere.  Levi  shared more of the history of the building and the events that took place there.  For example, the stage that held the Academy Awards ceremony was removed in the 1950s.  During this time we also learned the Theatre had recently hosted a faux-premier, as part of the upcoming Disney film Saving Mr. Banks, recreating the 1964 premiere of Mary Poppins.  For such period pieces, the Theatre must take on the appearance of an older version of itself.  Levi explained that film producers will often pay to make small cosmetic changes to the interior, such as the installation of plastic covers over the handrails at each seat to mask the current look of the seating area.

After a short time in the seats, we moved down toward the sizable screen, which was covered by an impressively decorative curtain that (like most everything inside the Theatre) was big and red.  Along the way, we had the chance to see the decorative details on the ceiling, walls, and throughout the building, all of which were remarkable.  We also learned that hooks on the ceiling remain from the premiere of the movie Earthquake, when a protective netting was installed to protect patrons from (the illusion of) falling debris during the film.  Standing at the base on the screen and looking back at the seats was where you could appreciate the size and grandeur of this impressive edifice.

Our tour took us back outside the building, where Levi continued to fire out facts about the celebrity hand and footprints in the Forecourt like a machine gun that never ran out of ammunition.  I caught a few tidbits, like hearing that this tradition began in 1927, when actress Norma Talmadge accidentally stepped in wet cement prior to the Theatre's official opening.  We also heard the story of Jimmy Stewart's handprints on a Friday the 13th, when he signed while under a ladder and holding a black cat, but there seemingly are stories buried under each cement slab in the Forecourt and behind nearly every ornate detail throughout the building and Levi seemed prepared to unearth every one of them if you gave him time to do so.  We may have spent a half hour with him, but could probably have stayed the whole day and still had plenty more to learn.  As it stood, the length of the tour was just about right for a Hollywood history neophyte like me to absorb, but a real Hollywood or film scholar would also appreciate having the chance to talk with such a well-versed guide.

For anyone visiting Hollywood with an appreciation of movie history, architecture, or celebrities, a visit to the Chinese Theatre will be time and money well spent. 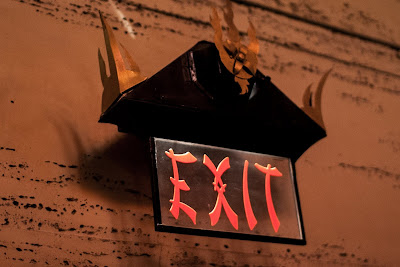