Backstage Magic at The El Capitan Theatre in Hollywood

As the nation's attention turned to Hollywood for last weekend's Academy Awards, let's stay in that area for a look around another historic theater.  Last October, I had the chance to visit a monument to Hollywood's past, the The El Capitan Theatre, as part of the Adventures by Disney Backstage Magic tour. 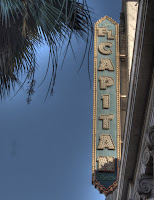 The El Capitan opened in 1926 as part of developer Charles Toberman's plans for a theater district.  Toberman was also involved with the building of the Roosevelt Hotel (a block down the street) and Grauman's Chinese Theatre (almost directly across the street), so it appears his vision was not only a success in his lifetime, but has also stood the test of time.  For much of the El Capitan's lifetime, the building operated under the Hollywood Paramount Theatre moniker, but an early 1990's restoration brought the property back to its glory years and restored the original name.  The Walt Disney Company assisted with those restoration efforts and today acts as the primary tenant of the theater, which shows films from the Disney Studios' library and current releases from the various Disney film companies.  A brief history of the theater is available of Disney's web site.

Our tour group saw a 4D production of Tim Burton's The Nightmare Before Christmas, which runs annually in the weeks leading up to Halloween.  In addition to the magnificently restored details around the building, the El Capitan features a Wurlitzer theatre organ, imported from San Francisco's Fox Theatre, and they don't let it go to waste.  Renowned organist and one time "Organist of the Year", Rob Richards performed a wide range of Disney standards before the organ sunk into the floor and the theater fell dark when it was time for the movie to begin.  This YouTube clip isn't exactly what we heard, but gives you an idea what the prelude to the movie was like.

In classic theater tradition, the Donald Duck short Trick or Treat ran before the feature presentation, followed by a brief (video) introduction by Director Burton.  The 3D feature was clear and smooth and the movie sounded great.  The fourth dimension to the 3D film adds effects in the theater to the movie, such as Christmas lights, smoke, and snow at different times, synced with the film.  The add-ons to the movie didn't change the cinematic experience all that much, but could be a fun addition to a familiar film and are definitely not part of any DVD or Blu-ray extras that you can see at home.

After the show, I looked around the balcony area of the theater for a short time, seeing pictures of movie premieres from this location, including Citizen Kane!  I didn't linger upstairs for too long and did not have the chance to see the downstairs exhibition space, which at the time included items from the production of one of Tim Burton's films (I don't recall if it was The Nightmare Before Christmas or Frankenweenie).  The theater offers tours and had I planned to spend more time in Hollywood it would have been worth investing some of that in learning more about the building's past. 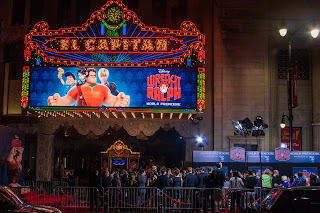 Adjacent to the theater is Disney's Soda Fountain & Studio Store, a good place to grab a snack before or after your trip to the theater.  The Soda Fountain also hosts regular events for the always active Disney pin trading community, including limited edition releases (I left with one of a 500 pin Limited Edition run recognizing this year's showing of Nightmare, featuring Oogie Boogie).  The night after we saw Nightmare, our Adventures by Disney tour treated us to an "ice cream social" at the Soda Fountain and afterwards some of our group got to see the El Capitan play host to the world premiere of Disney's Wreck-it Ralph.  In our short time there, we saw evidence of just how busy Disney keeps this theater.  We got a taste of the history of the property and a glimpse into its role in modern day Hollywood.

In perusing the El Capitan web site, tickets to the theater appear to be on the pricey side, but compared with the cost of seeing a concert, sporting event, or other theatrical production it's not a bad deal.  You get more from a night at the El Capitan than you would from one of those more conventional entertainment options.  At the very least, take a look around the interior of the building next time you're on Hollywood Boulevard.  It is an impressive part of Hollywood's past and present. 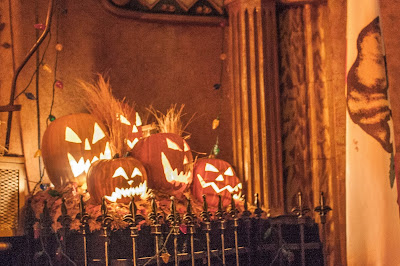 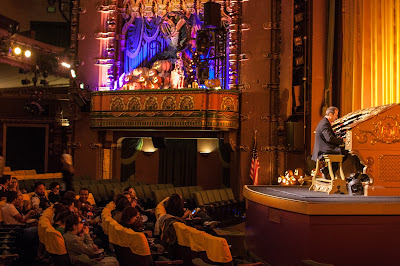