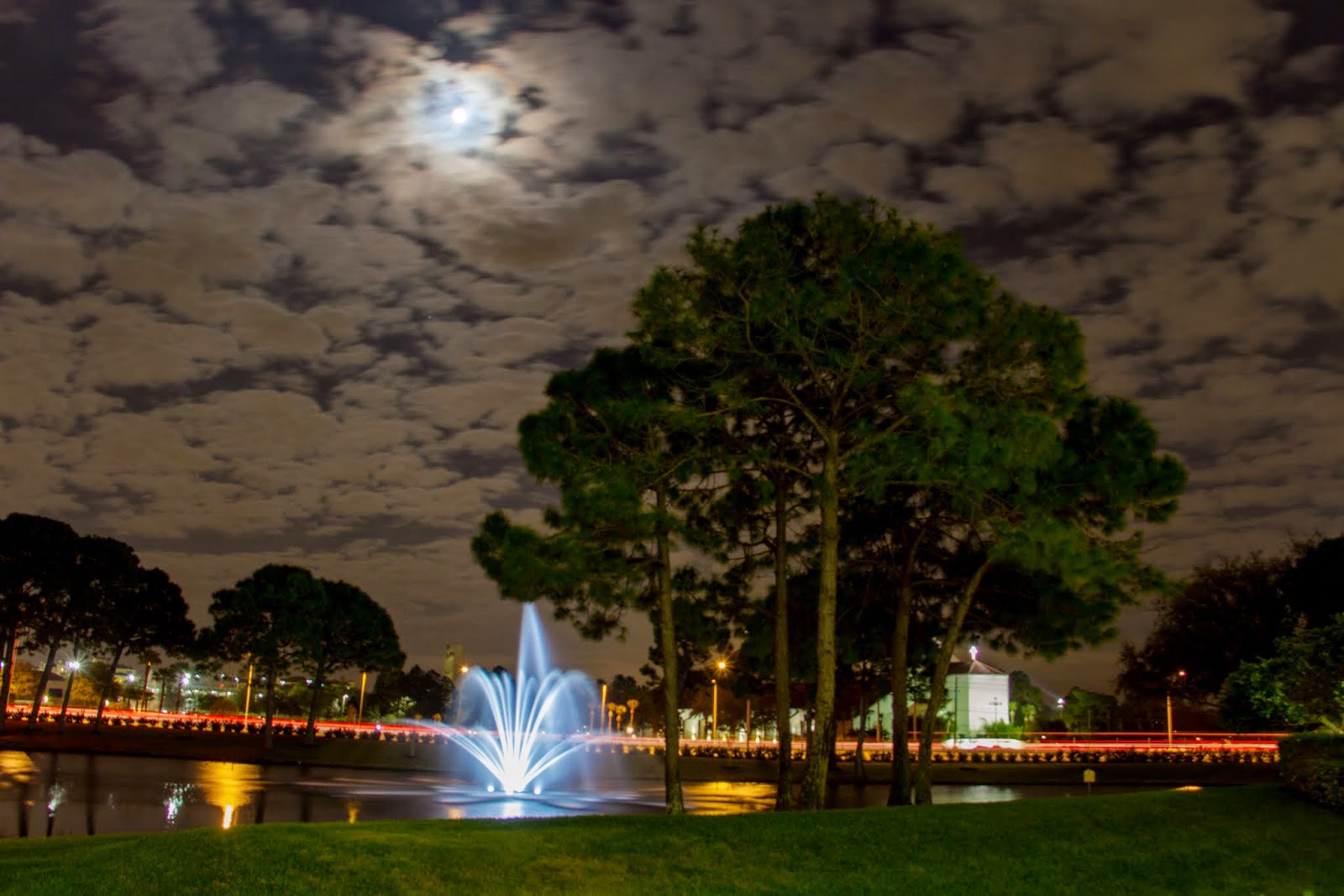 I spent three nights at the Clarion Inn Lake Buena Vista from March 7 - 10, 2015. I will share my experiences from that stay and pictures of the hotel room below.

PRICE
I booked my room just over a month before trip using a Priceline Express Deal. When booking Express Deals, you do not know the hotel where you will be staying until after you book and pre-pay for the reservation, but I did know the hotel location would be on or very close to the Disney property. I paid $196.29 for three nights, including all taxes and fees.

INITIAL IMPRESSION
The property is a short way from Fl-535 (Apopka Vineland Road), not far from Downtown Disney, on a road the runs parallel to I-4. The driveway to the hotel doesn't stand out very well among other shopping centers and hotels on Palm Parkway, but I had previewed the drive using Google Maps, so I didn't have any trouble finding the entrance. I was stopped at a guard shack and directed to the lobby, where there was plenty of room for check-in parking.

Once inside the lobby, there was no line to check in when I arrived just after 10:20 PM, which was good, since there was only one person at the front desk. Another guest arrived shortly after I did and another clerk appeared then began to assist her with the check-in process, but that employee soon disappeared to "the back" and still hadn't returned when I finished checking in. After I had my room key I had another strange experience, after a friendly greeter in a wheelchair suggested the person at the hotel attractions desk give me a "Welcome Packet". I soon realized this was some sort of Wyndham timeshare scam and had to quickly figured out how to extricate myself from the situation. Before I left I was offered free tickets (though I'm not sure what they were for) and then $100 in food (I didn't ask where) after I said I had an annual pass. If you stay here, I suggest declining the "Welcome Packet."

I'm not sure if the map I was given to find my hotel room was peculiarly designed or just the arrows to my room were poorly drawn, but it took longer to find my room than it should have. The signage around the hotel isn't very clear either, but once I found the room I had no problems getting back to it again. The hotel has outdoor corridors, so check-in is the only time you pass through the lobby area.


THE ROOM / AMENITIES
I was mostly happy with my room, as it was clean and the bed was comfortable, with the biggest problem being noise reduction. The room offered many amenities, including a large (by hotel room standards) refrigerator, a microwave oven, hair drier, iron, and coffee maker (unlike Disney "value" rooms, which leave out the coffee maker). The room was on the small side, but no worse than a Disney value room. Counter/desk space was comparable to a Disney value resort, though a little easier to access, because it didn't require storing things on top of the television. Speaking of the television, I was pleasantly surprised to find Stacey's Disney Must Do's available at this resort.

The air conditioning worked well, but lighting was a little below par. Not disturbingly dim, but not as bright as I would have liked. Keeping light out (and passers-by from looking in) was difficult for the first night, until I discovered the curtains were backward compared with most hotel rooms I've stayed in (with the heavy curtain hiding behind the lighter liner). Internet access was mostly functional, though slower than I've experienced in recent years at Disney resorts, but on a par with what I've experienced in midrange hotel rooms in other parts of the country.

The bathroom was tiny, similar to what you would find in a Disney value resort. A separate room for the toilet and shower, with the sink outside, is helpful when sharing the room with others, as was a sliding door that provides a changing area after you've showered. This is also similar to Disney resorts, though there was more counter space at the Clarion than you find in Disney value resorts. My biggest concern with the bathroom facilities was widely varying water temperature, which was only warm enough for my first shower when I turned the heat up full blast, and barely lukewarm for my second shower (on Sunday morning around 6:30 AM). After those two showers, I had no trouble with water temperature. Water pressure was also sufficient and the resort offered four sets of towels, which was an ample supply for my stay.

Noise reduction was the only area where this room performed poorly, as I would rate this somewhere between poor and horrendous. It doesn't help that the hotel is located just across a small lake from an Interstate Highway (I-4), but it doesn't have to sound like you're sleeping in the middle of the road. Additionally, I heard every suitcase that rolled past or any conversation taking place outside the room as if people were right next to my bed. My travel plans meant that I was exhausted enough to be able to sleep after the first night and I woke up early enough each morning that rush hour hadn't begun (on the highway or outside my room), but if you're planning a restful vacation with a lot of time in the hotel room, then request a room facing away from the highway or consider staying elsewhere.

The resort also featured two swimming pools and a children's play area. I did not try any of these features, but the pools seemed sufficient to accommodate the guests on site, never appearing overcrowded when I returned to the property for afternoon breaks.

PARKING
Parking wasn't ideal, but not terrible. When I arrived, I found a spot several rows away from where I thought my room was, since there were no spaces available near the hotel building. In the middle of the afternoon the lot was nearly empty, but finding a spot near the hotel was difficult when returning from the parks in the evening. However, even when parked in the farthest remote location in the hotel's lot, I was still closer to my room than I would have been in most Disney resorts.

LOCATION / TRANSPORTATION
I had to drive to the Magic Kingdom one day. In the morning, I was planning to arrive for rope drop and ended up parking about four rows from the TTC, then had almost no wait for a monorail, so I ended up arriving at the Magic Kingdom entrance 33 minutes after I left the hotel. That's not far out of line with my average travel time taking buses from Disney resorts to the Magic Kingdom (29 minutes 40 seconds, over 18 trips since 2010). In the early evening, I drove to the the TTC again, and the whole trip from hotel to turnstiles took only 26 minutes. My other car trips from the Clarion included twice driving to Epcot, taking 14 and 12 minutes (compared with an average of 11 minutes 14 seconds driving time when staying on-site) and one trip to Animal Kingdom, which at 22 minutes was considerably longer than my average travel time staying on site (12 minutes 35 seconds), though my frequency of stays at the All-Star Resorts and their proximity to Animal Kingdom affect that number.

The map below shows the location of the hotel in relation to the Disney theme parks, with a route to the TTC highlighted (click on the map to see a larger version of the image). 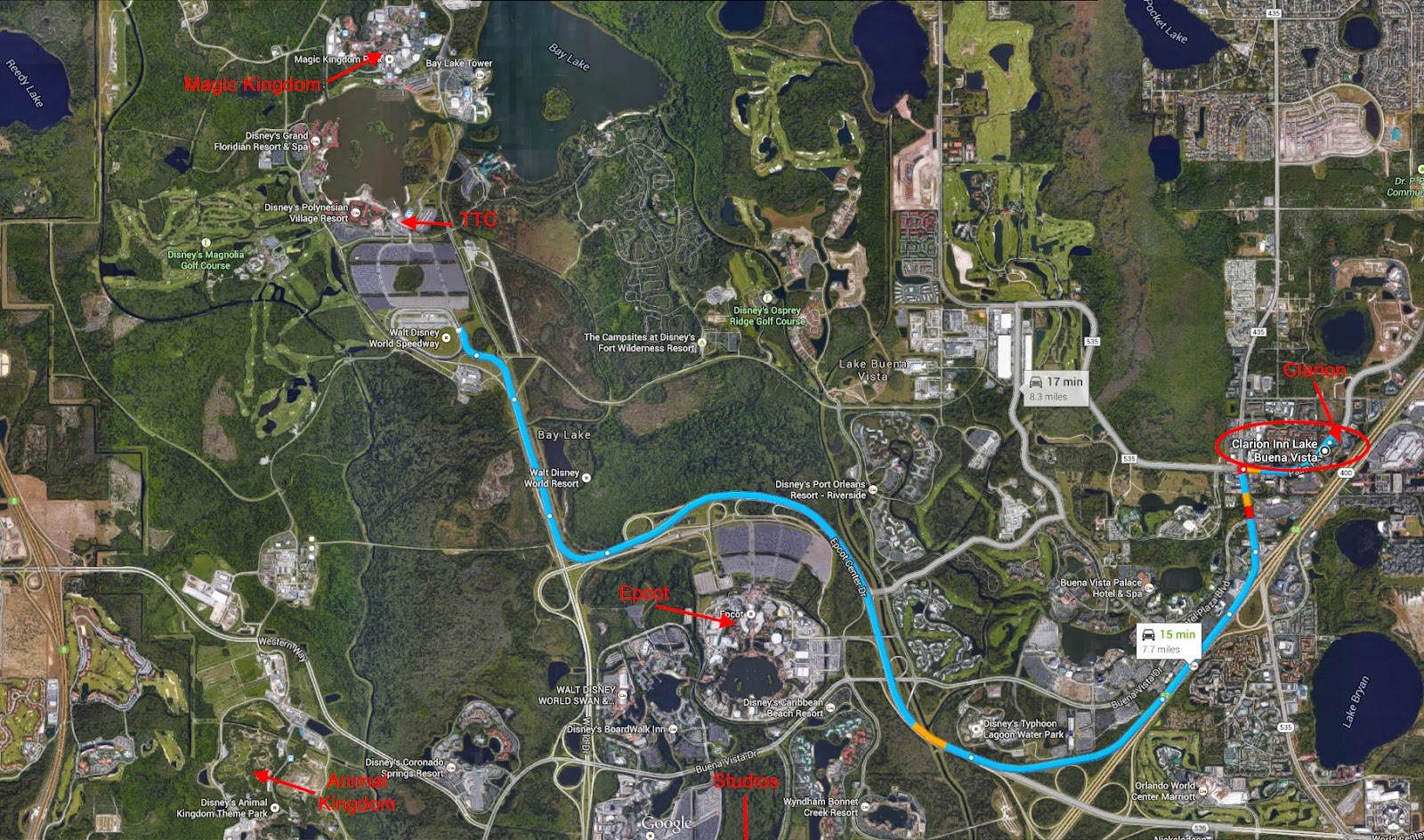 I believe there was a shuttle bus available to the Disney parks, but I did not use that service, so I can't offer any comment on how efficient or on-time it was. 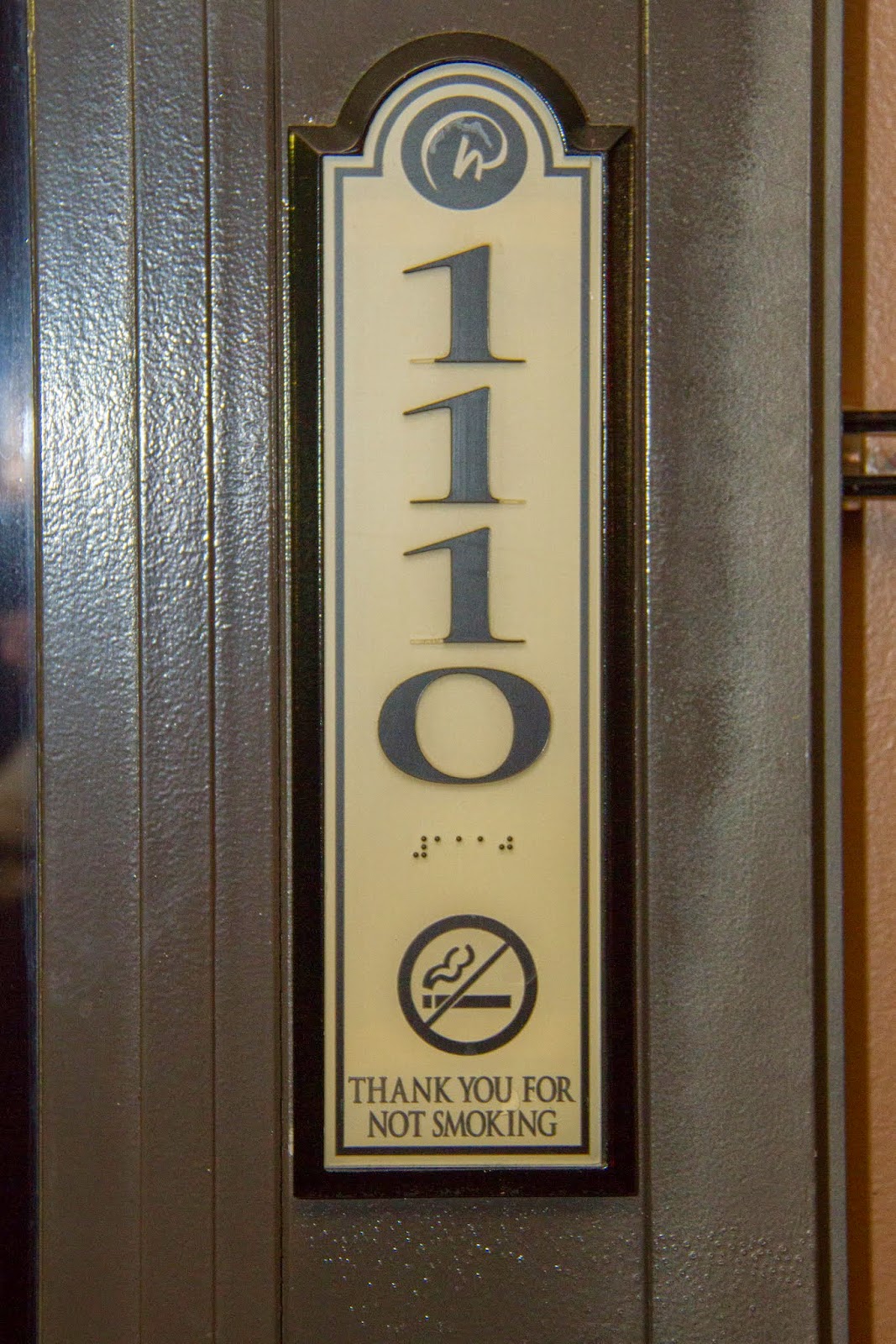 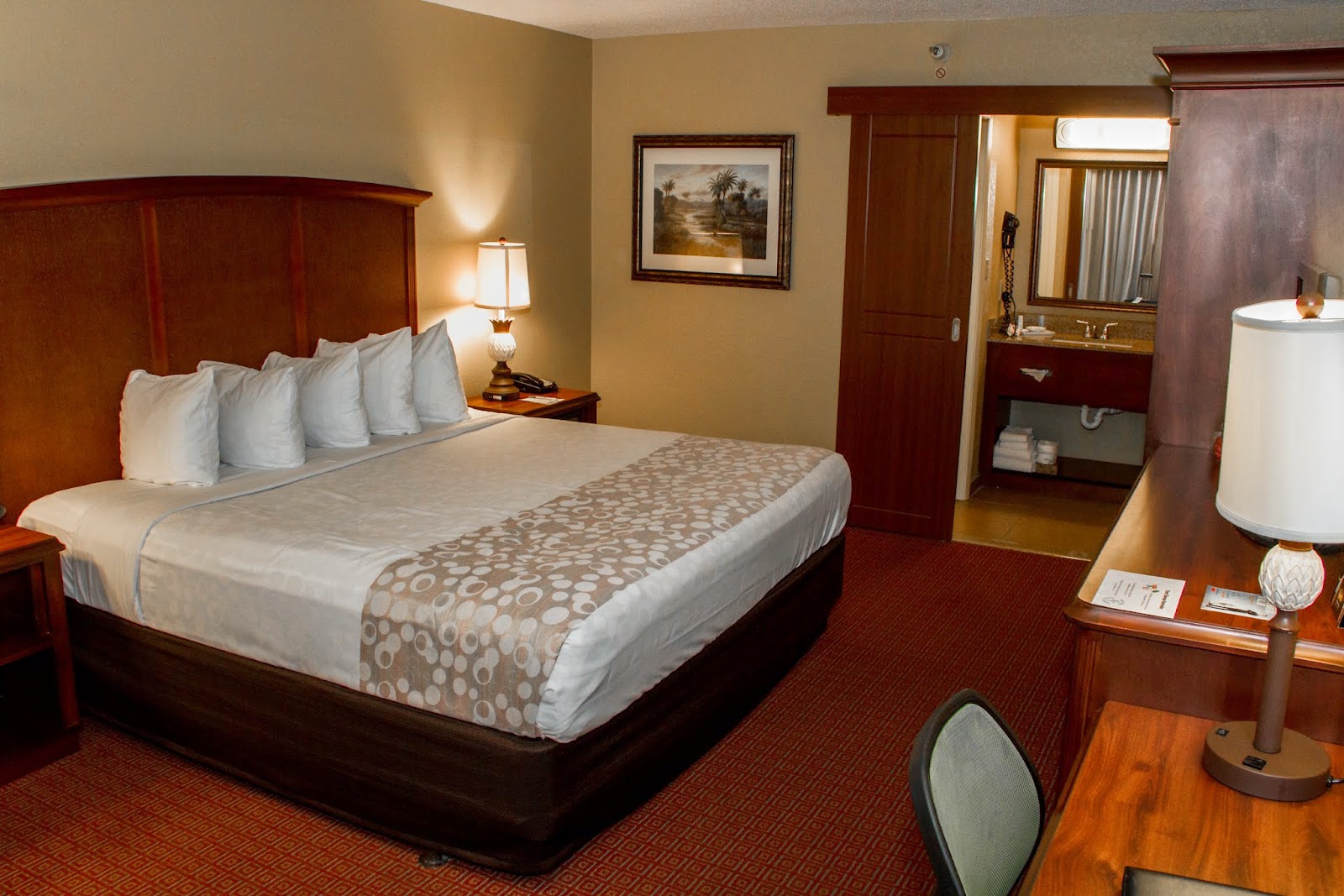 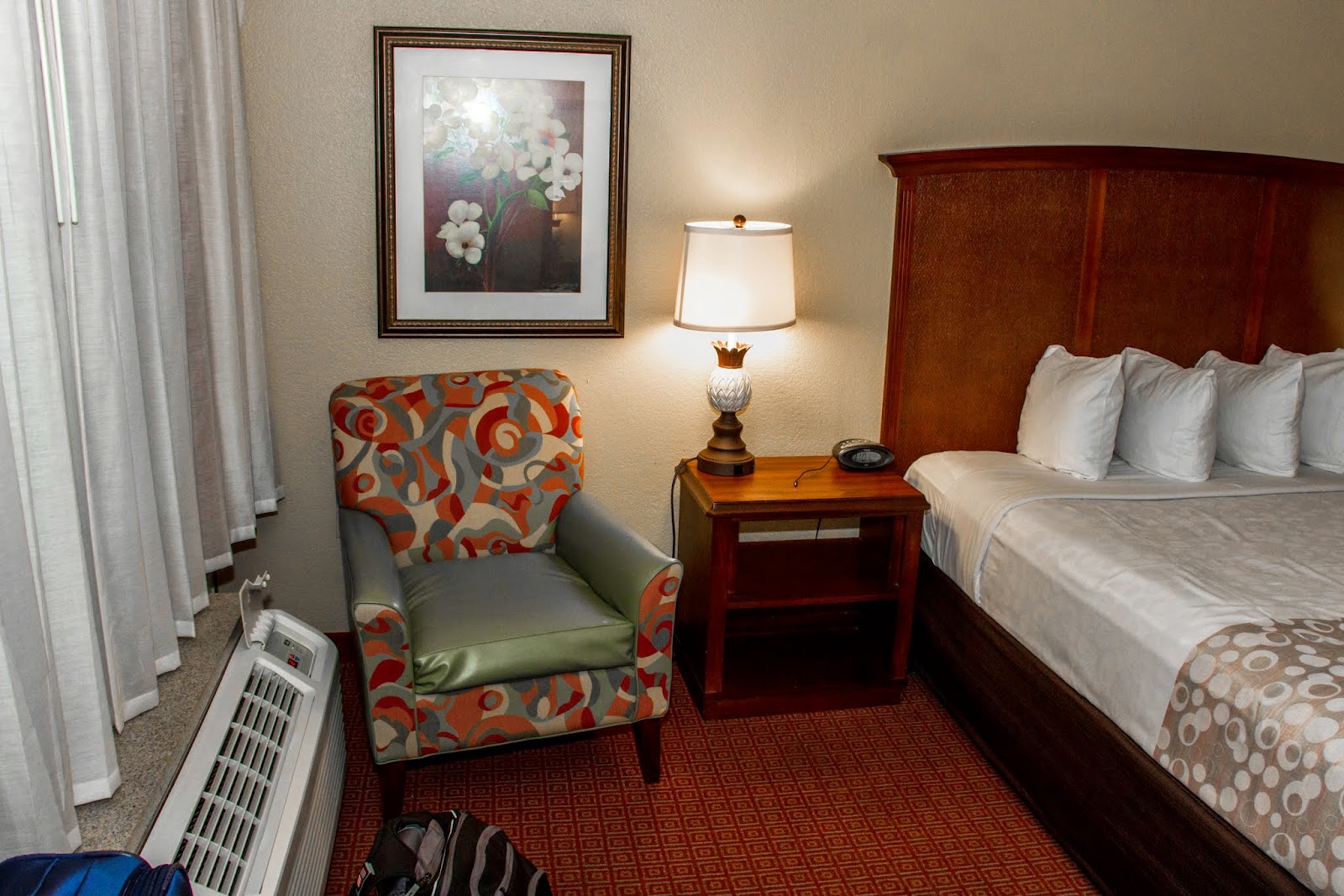 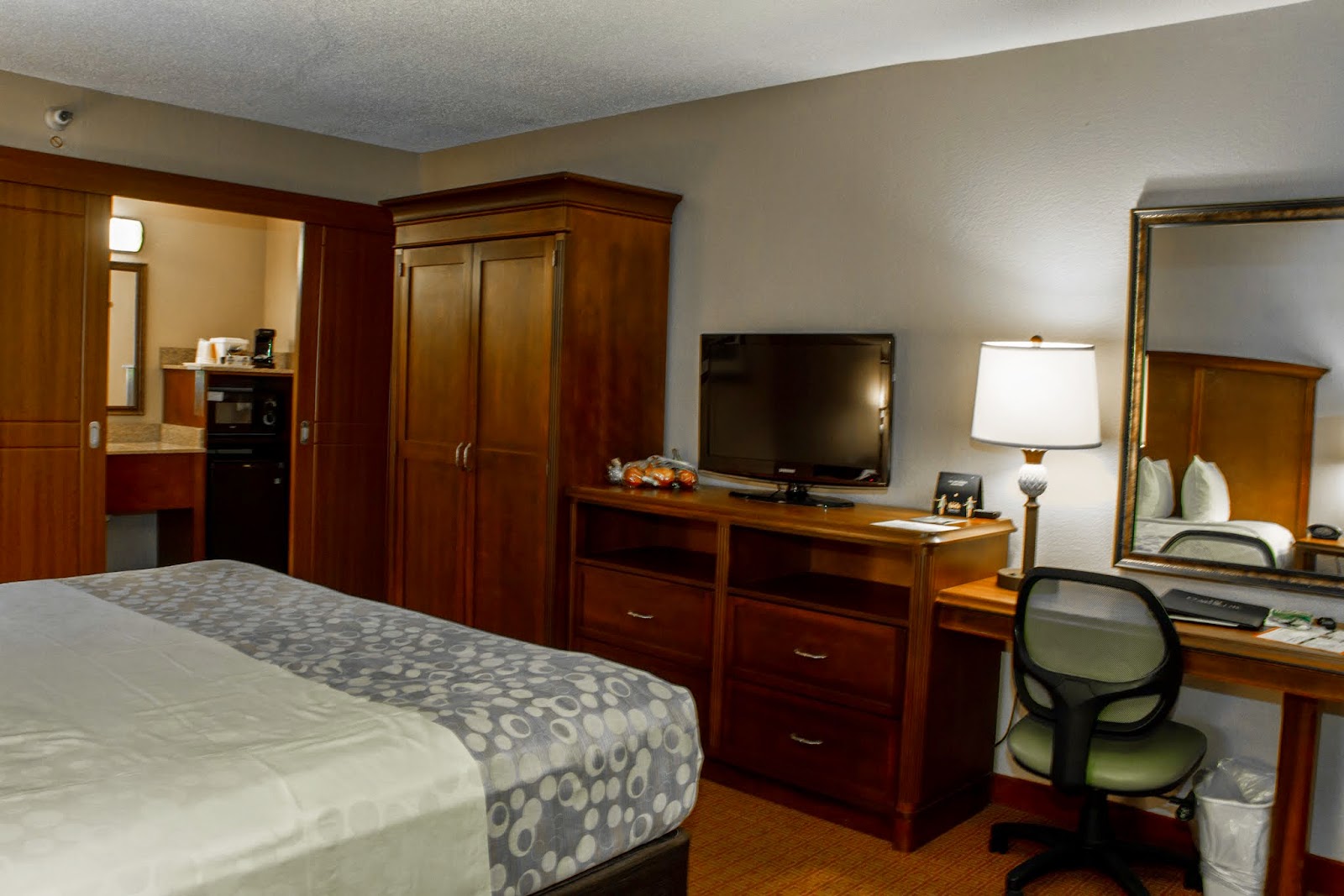 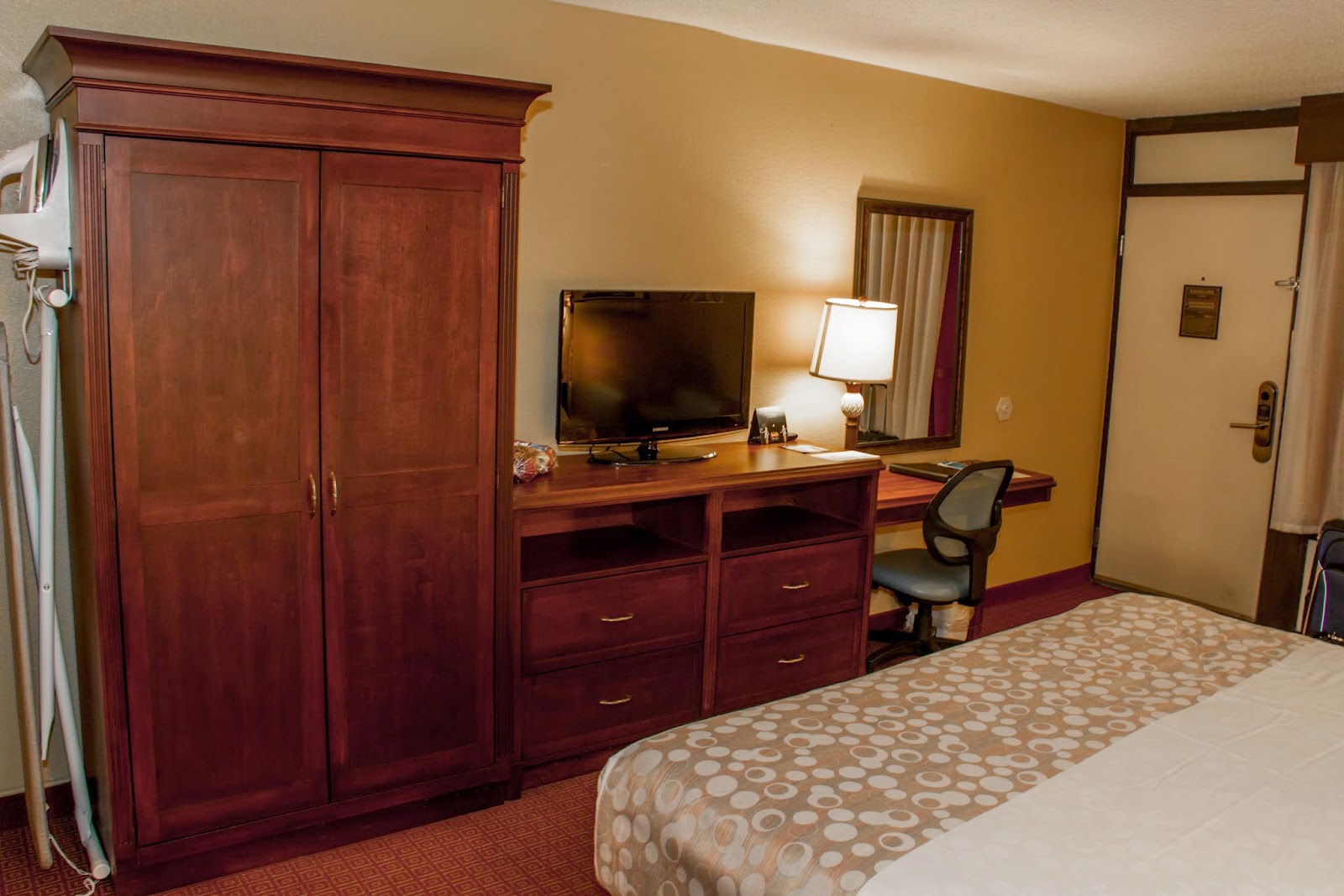 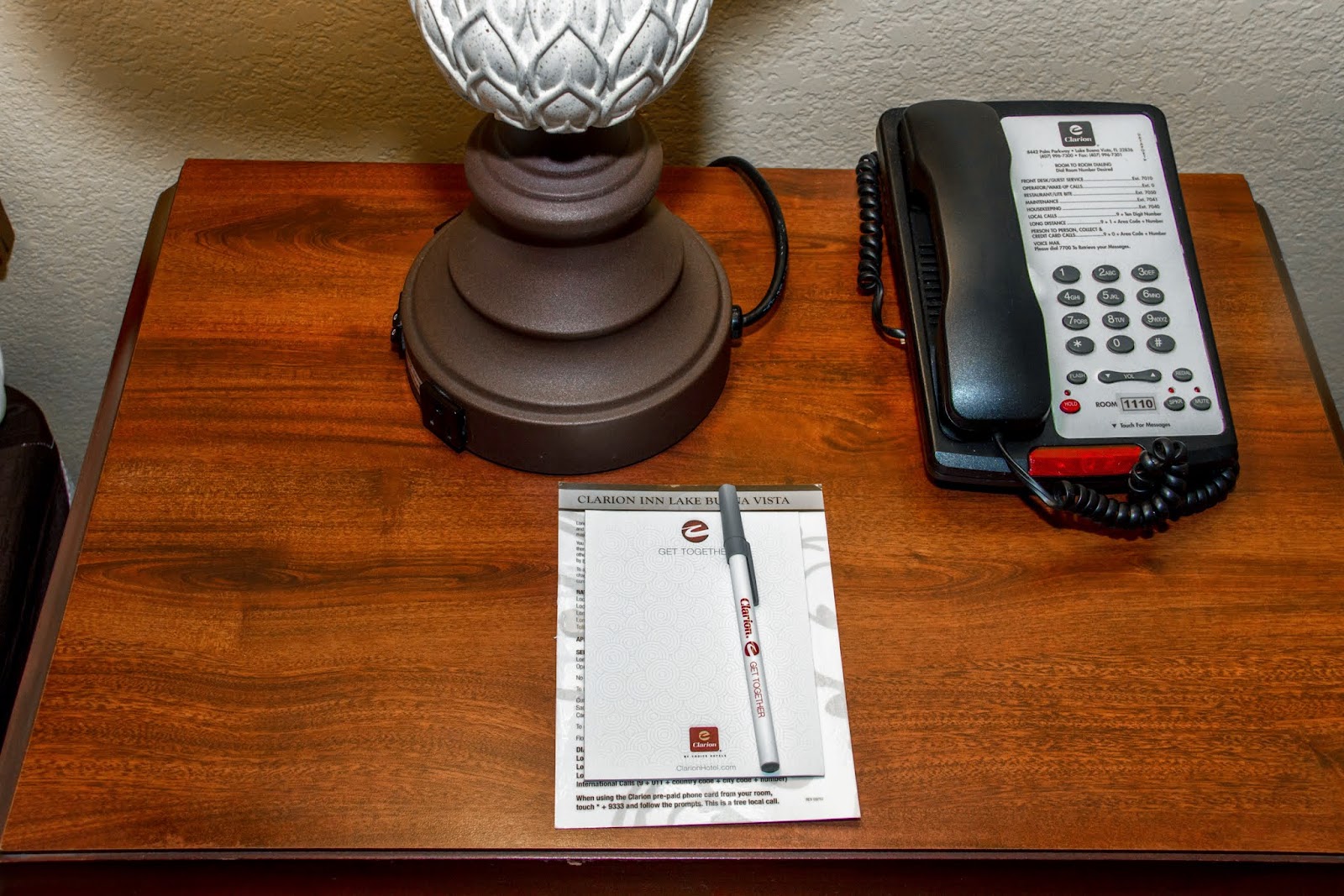 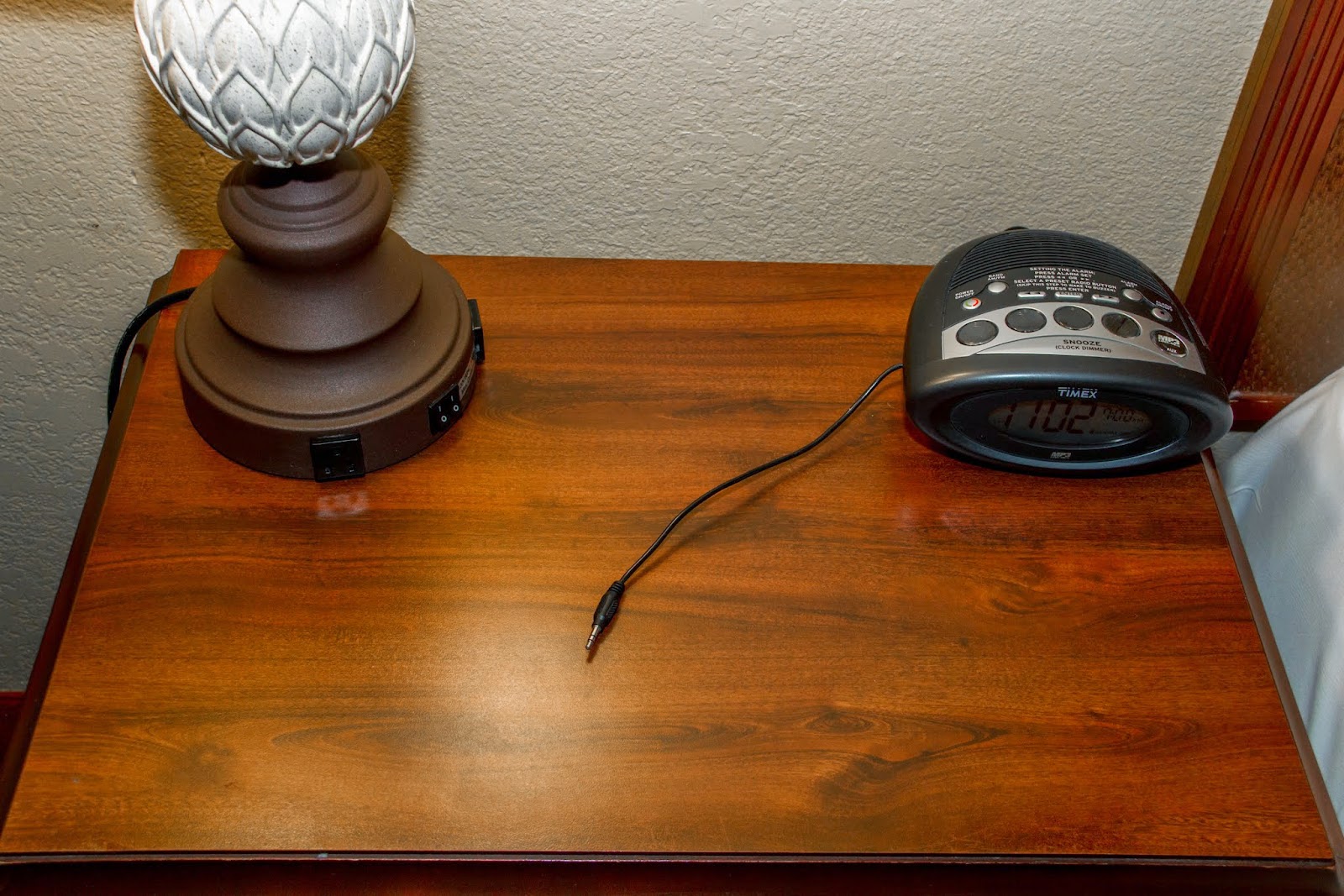 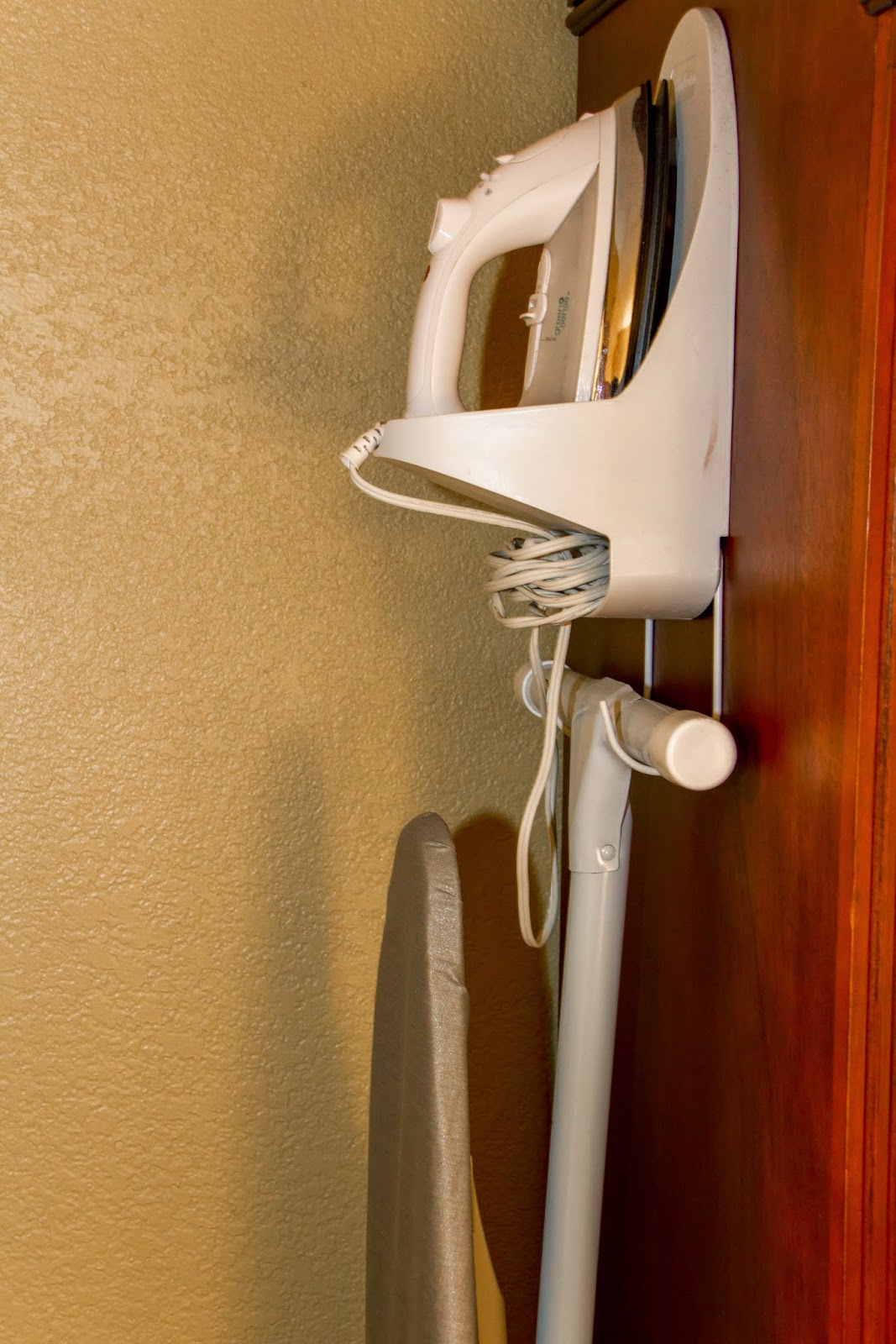 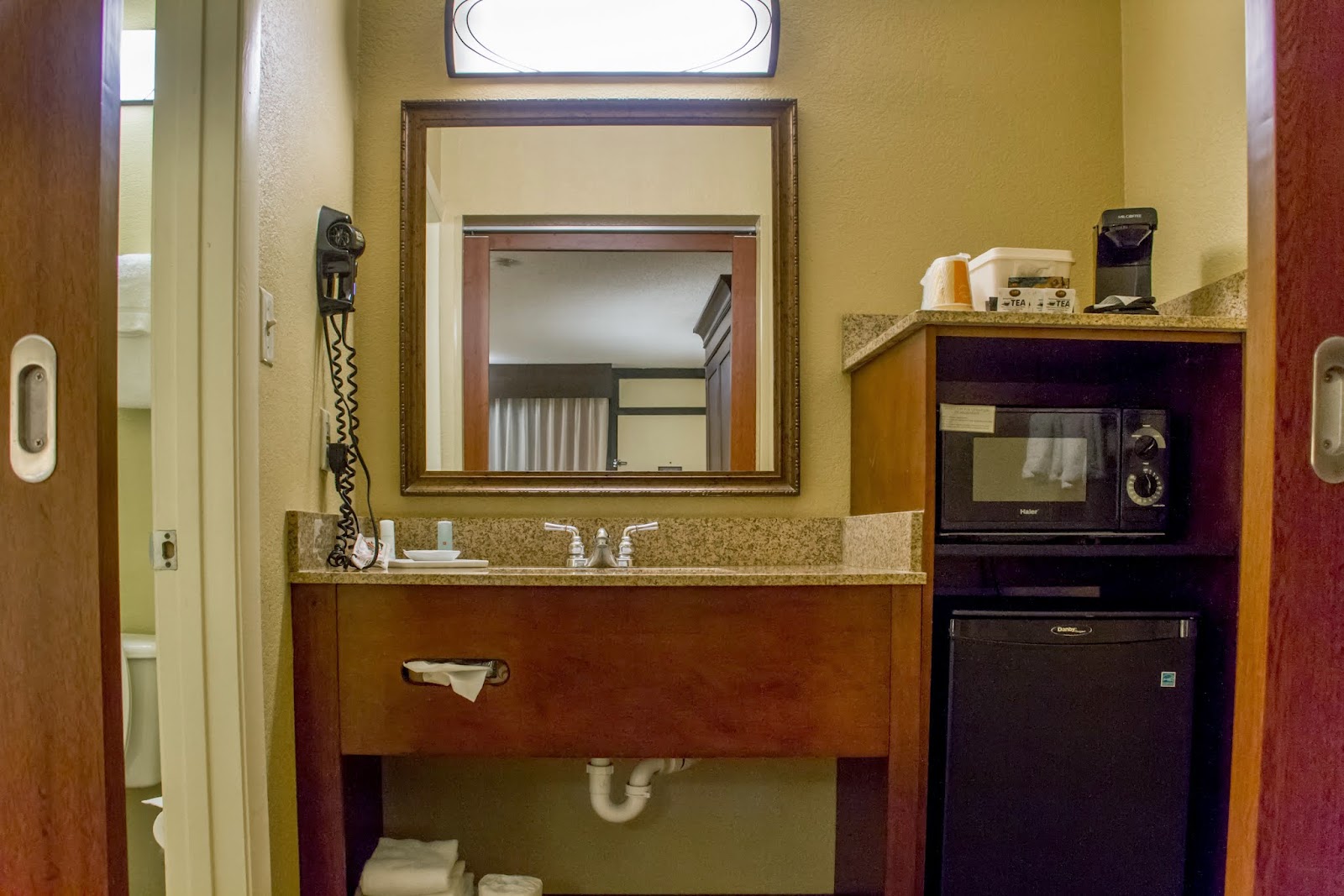 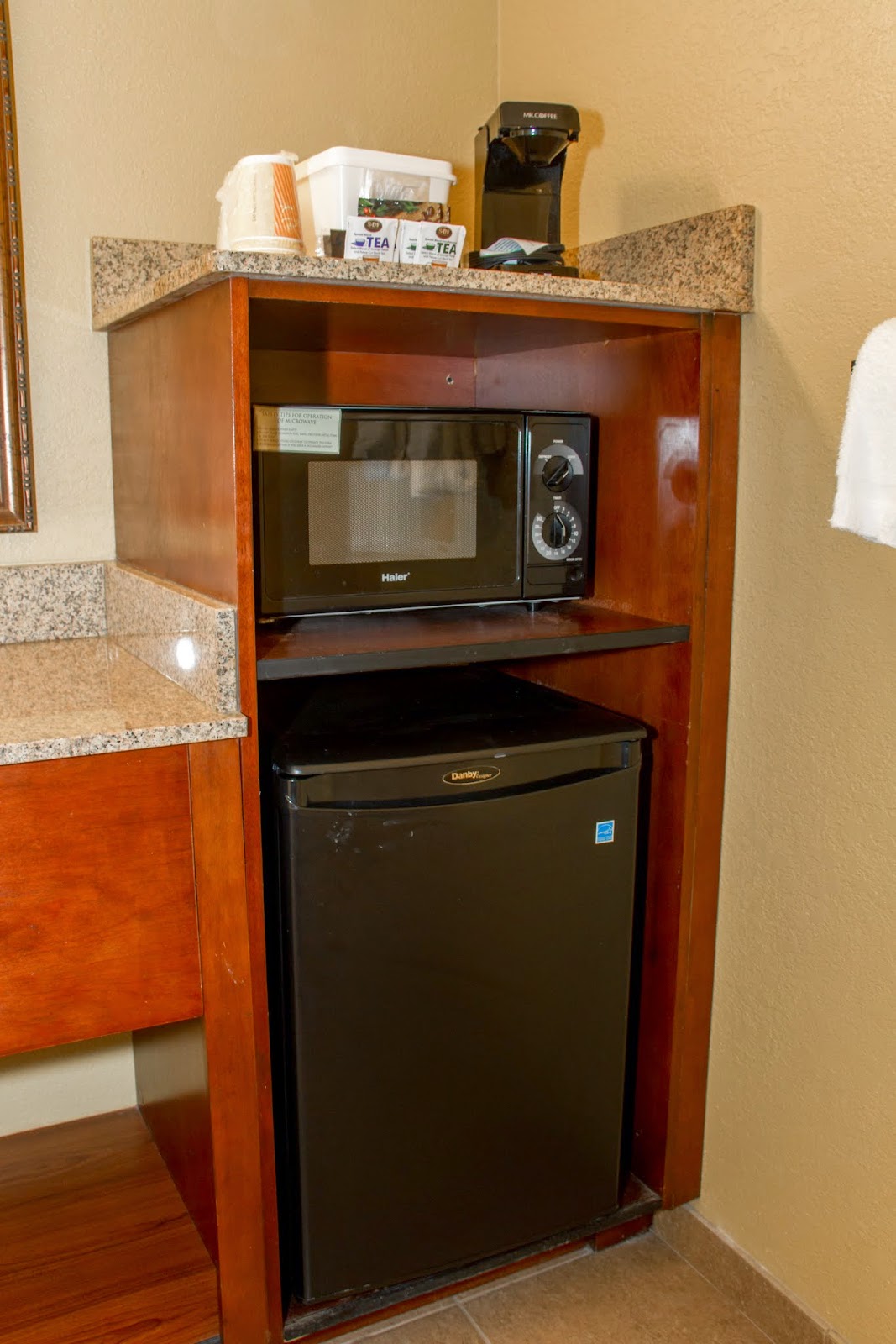 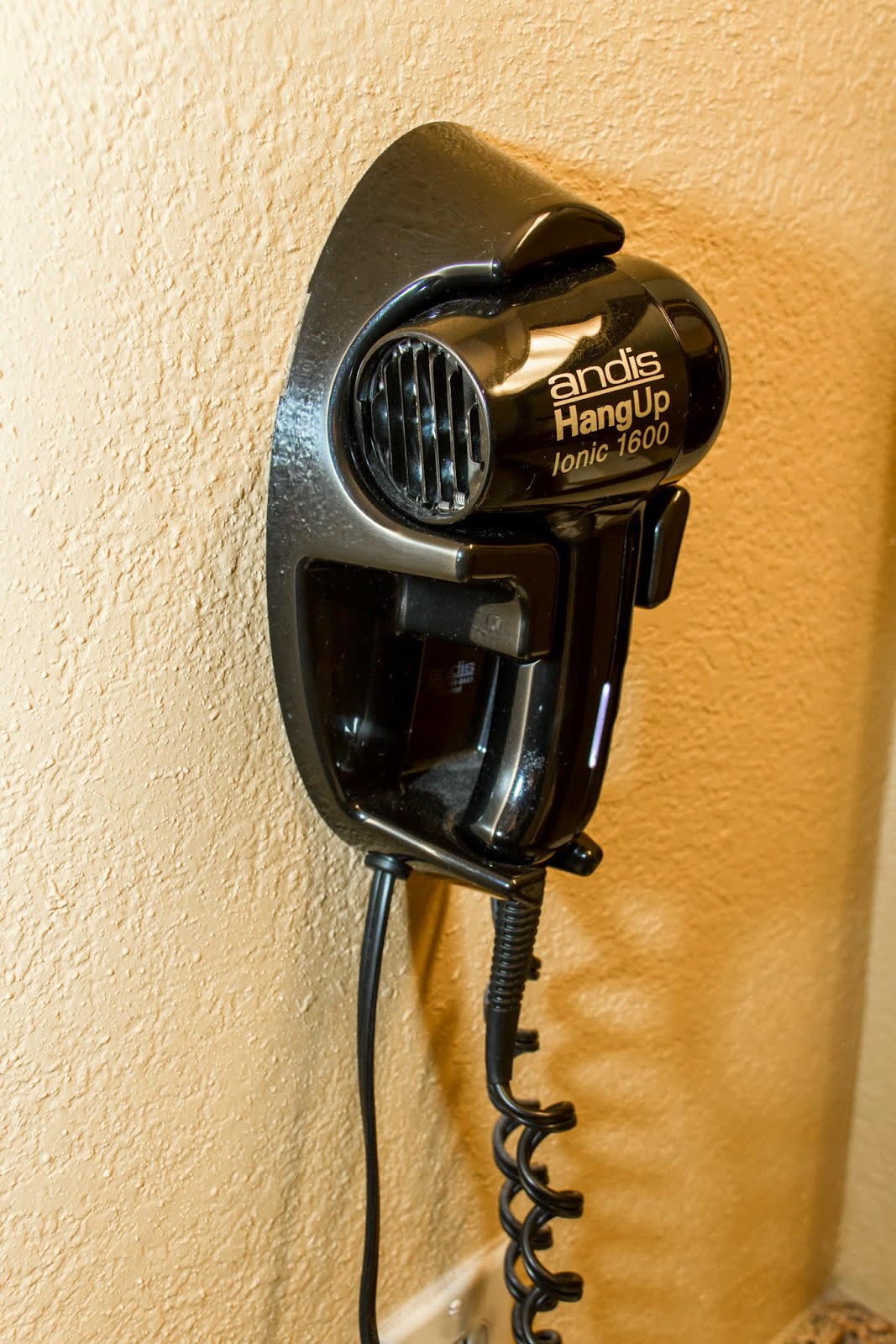 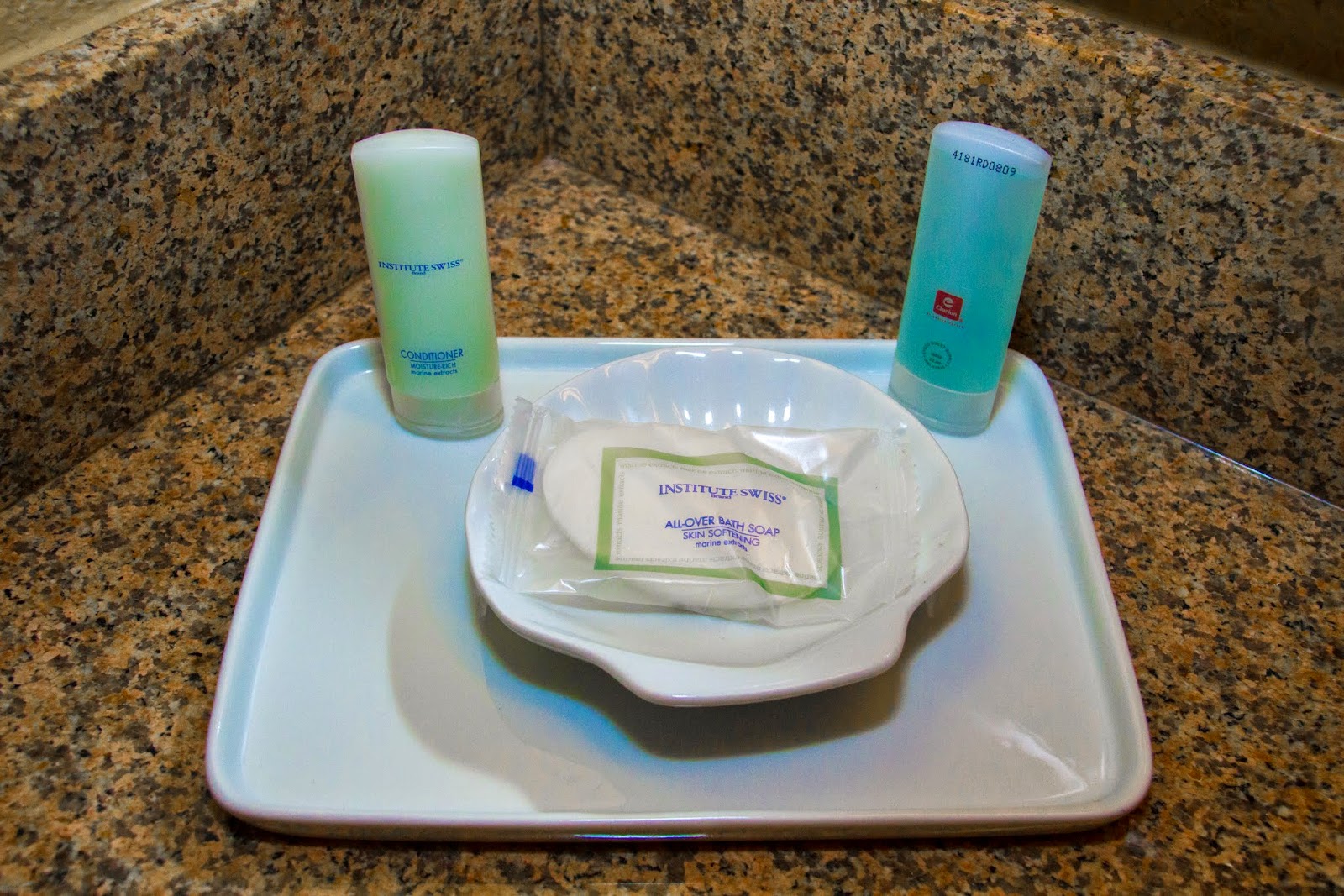 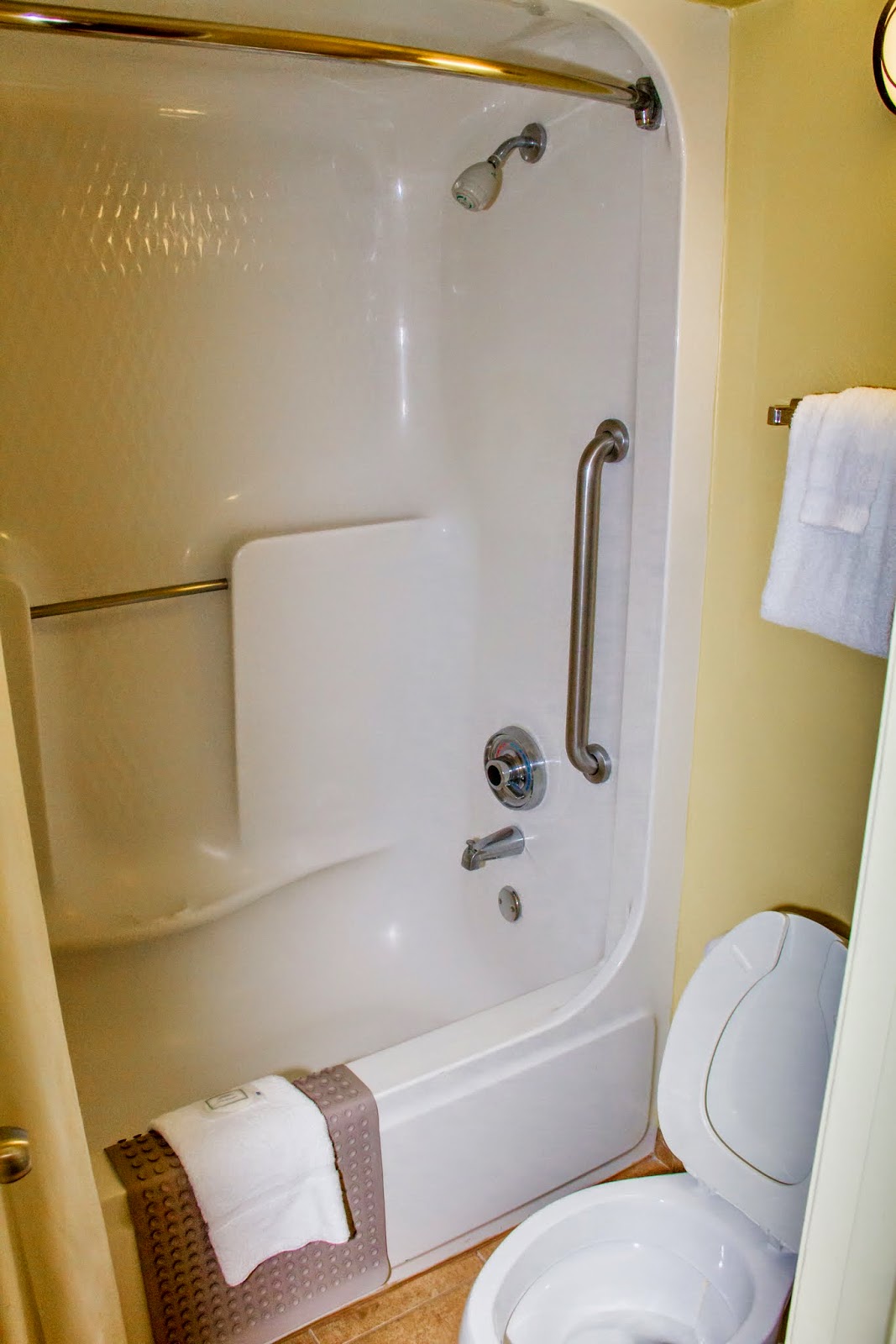 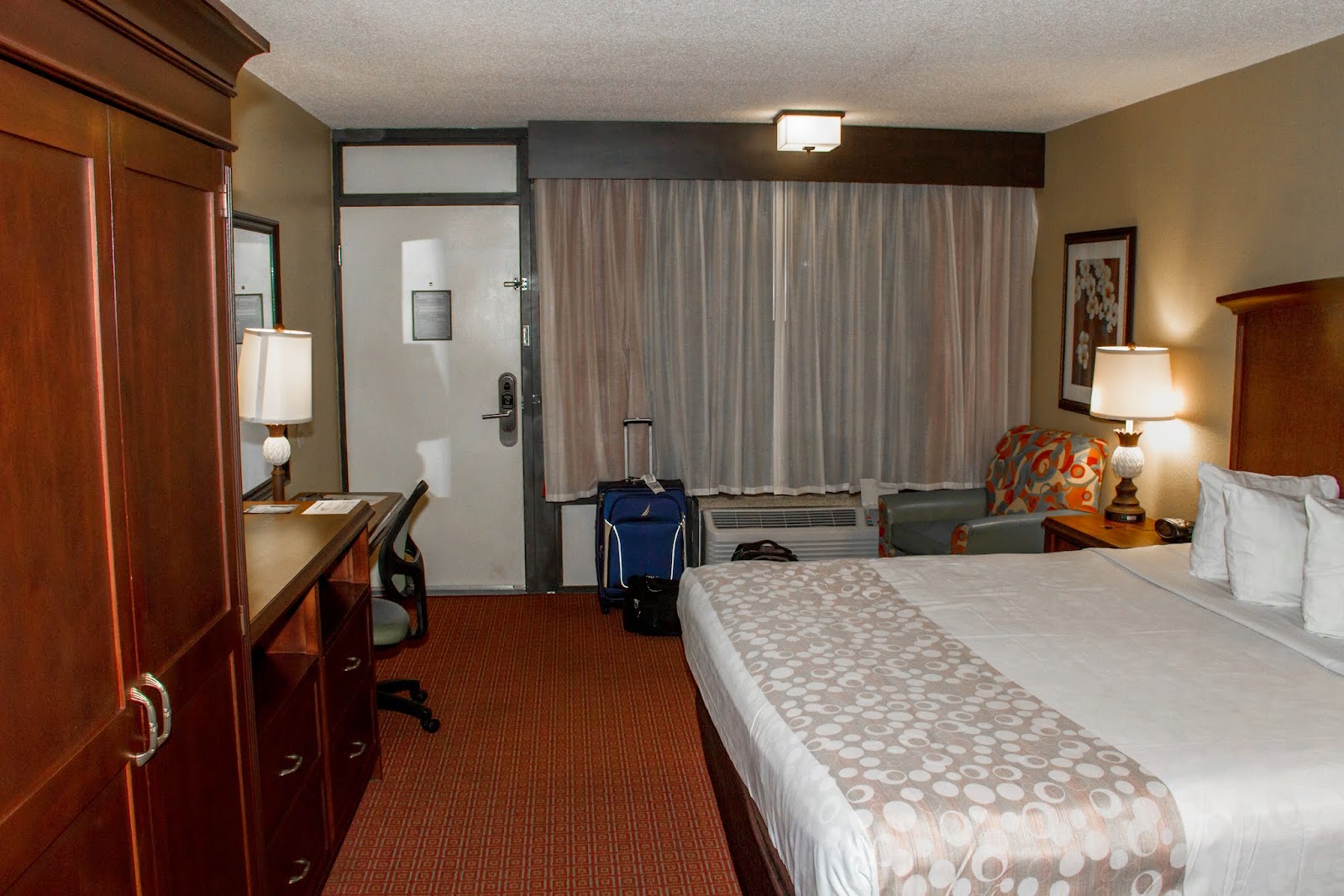 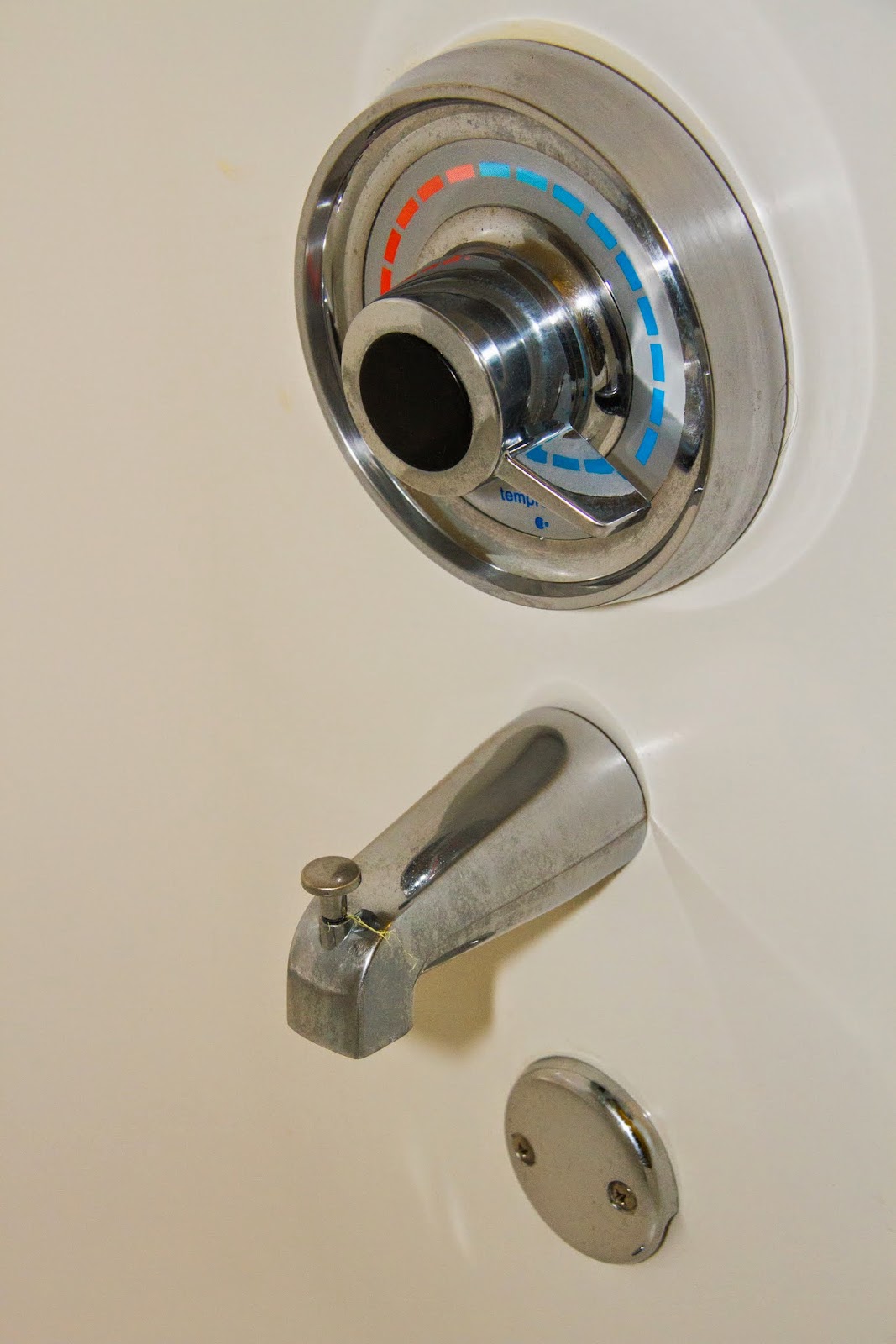 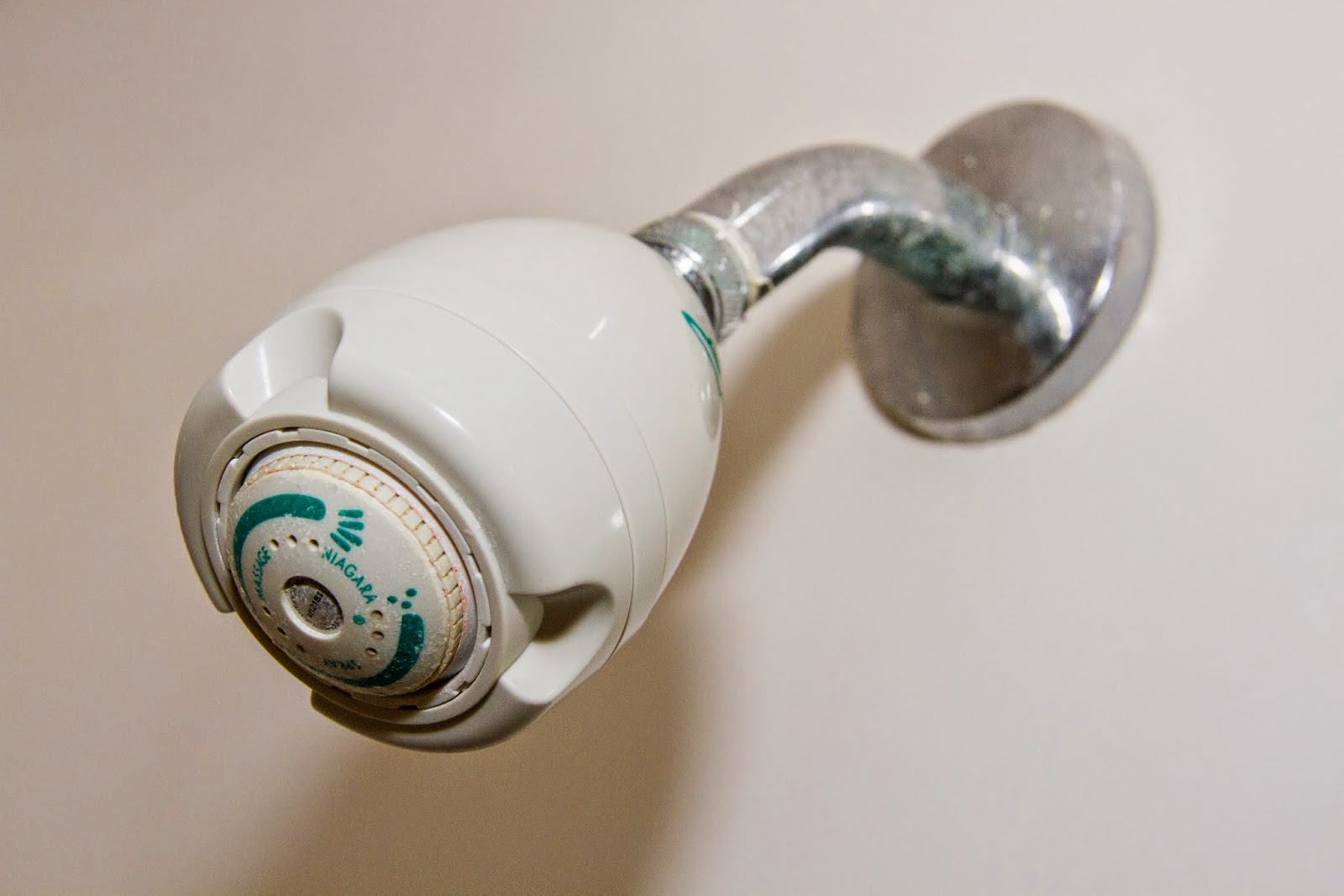