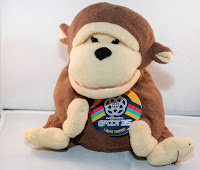 I was excited to spend October 1st in Epcot this year. Over the course of 35 visits to Walt Disney World and more than 150 nights on and around Disney property, I had never before found myself in a Disney park on the anniversary of the Magic Kingdom (opened October 1, 1971) and EPCOT Center (opened October 1, 1982). Having watched the celebration of Epcot's 30th anniversary from afar five years earlier I was fortunate to attend the park's 35th anniversary celebration in person this year. For those who couldn't join me or those who wish to remember the day in the parks, I will recount my experiences being part of Epcot's 35th anniversary below.

My day began early, with a 7:00 AM alarm, and I managed to drag myself out of bed after only one tap of the snooze button. A long night celebrating Epcot's anniversary with friends the night before kept me awake until well after 2:00 AM, so I didn't plan to start today early enough to be near the front of the crowds for rope drop, but I figured to still be in the park before it officially opened. I had already seen pictures from some Disney bloggers outside the park, positioning themselves to be at the front of the merchandise lines, before I even got into the shower, so leaving my hotel room at 8:12 meant that I knew I'd have quite a bit of company when I did arrive.

Over the course of this trip, I would spend time with more than a dozen friends, but only one of them chose to join me for rope drop this morning. Since her hotel was on the way to Epcot, I stopped to pick up Sue, only adding a couple minutes to my morning drive, and we left her hotel by 8:21. Fortunately, being a Sunday meant there wasn't much regular rush hour traffic, so it was smooth sailing to Epcot, at least until 8:30 when we found quite a few other cars waiting to enter the parking lot. Still, despite the backup at the toll booth, we were parked in a pretty good spot in the Amaze lot at 8:38 AM We made it through bag check and to the Passholder line tapstiles at 8:47, but noticed they weren't letting any more people into the park. That seemed like a bad sign, but after a few minutes, guests must have filled in more available space and the line started moving again. We entered the park at 8:51 AM. 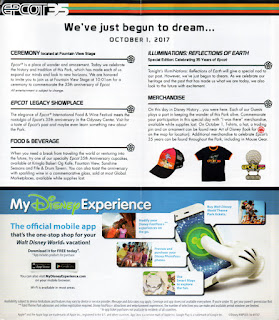 We picked up our commemorative buttons, park maps, and times guides, and then joined in with the crowds. The center pathways into the park were pretty well packed, but I noticed we could get relatively close to the "rope," which hadn't dropped yet, if we took the far right path, near where you would find character meets on most mornings. We were still behind a lot of other guests, but after a few minutes when we started walking, we were ahead of more people than we were behind.

I hadn't really planned on joining in the merchandise madness on this day. I didn't see any of the "I Was There" items, which were only available this day, that I really needed to have and since I've never sold anything on eBay I didn't figure I was going to pay for my trip selling things that I bought. However, since we ended up much farther to the front of the pack than I expected after arriving so late, I figured I'd see how the line progressed. We were already inside the abandoned Innoventions West building that was housing the one-day only store by 9:01, so we might as well get the full Epcot anniversary experience. Sue didn't share my curiosity for how this process worked, so she left to explore the rest of the mostly empty park, walking on to Soarin with only a minimal wait and eventually finding a good spot to watch the special 35 Anniversary ceremony. I was enjoying conversation with a woman from England (I think she may have been from Bath), who was just starting a three week vacation in the U.S. Through the human traffic jam we found ourselves in, I learned the morning commutes sound very similar in the U.K. to what we see in this country, except that you sit in traffic on the opposite side of the road.


After the Anniversary ceremony finished, there weren't any more official Disney events scheduled until Illuminations at the end of the night, so it was time to explore the Food & Wine Festival. This was likely to be my only visit to the Festival this Fall and I missed the chance to visit food booths the night before, because I didn't think I would enjoy doing so in a steady rain. I wouldn't be able to even make a dent in the list of items I wanted to try, but at least I'd have the chance to sample some booths that weren't around during any of my other Food & Wine visits.


Most of my friends were gathered to ride Spaceship Earth together, but I wanted to get back to my hotel room to retrieve my tripod and second camera to photograph and record video of the evening's performance of Illuminations. That turned out to be a good decision, as I later found out the flurry of group text messages I received indicated the ride stopped for an extended period of time, leaving my friends stranded in ancient Greece for long enough to attempt to translate their words (with questionable accuracy).

I walked out of the park at 5:23 PM, was in my car a few minutes later and back to the hotel room just before 5:45. That left me time empty the Food & Wine Festival receipts from my pockets, shower, and gather my camera equipment before leaving the room at 6:56 PM. I parked in one of the first rows of the Create lot, on the side closer to the trams/walkway to the park entrance at 7:12 PM and was back through the tapstiles again at 7:23 PM. After picking up another "I was There" button, it was time for me to find food and setup to photograph the fireworks.

Most of my group of friends had made FPP reservations with watch this evening's showing of Illuminations, but I've had mixed results photographing the show from the FPP viewing area. Normally, it's a great spot, as close as you can get to the projections on the globe, perfectly centered, but people tend to line up long before the show begins even on a normal night. I stopped by the viewing area on my way into World Showcase and not only did I find a substantial line of people waiting for the FPP viewing area to open an hour before the show (and a half hour before the viewing area was supposed to open), but also found the prime viewing spot was occupied by an enormous stage for the recording of an upcoming ABC television show. I realized I wasn't going to be able to setup my cameras near the rail (where they could be out of the way of other guests), so decided to move on. While I regret abandoning my friends for the evening's show, this turned out to be a good decision, as I heard folks were packed into the FPP viewing area and the speakers weren't working properly, so guests couldn't hear the music for the show very well.

Having made my decision to seek another viewing spot, I started walking around World Showcase, only to find some of my favorite spots, near Mexico and Germany, already occupied. However, I stumbled upon a spot between the Germany and Italy pavilions that I was surprised to find only partially occupied. I was able to setup on the rail in between two families who were gathering to watch the show, one of which I found out had camped out at a table since late afternoon. The part of World Showcase closest to Future World is always considerably more crowded than the banks of the "back" of World Showcase Lagoon, but I was surprised at how relatively uncrowded this part of the park was on what had been such a busy day. I don't think the crowd was ever more than one person deep behind me throughout the show.

Here's the video I recorded of the show:


Here's is video of the Epcot anniversary background music that played while I was packing up and enjoying the evening in World Showcase (though, I had to remove the music from Magic Journeys or Youtube wouldn't allow me to share the video):


Around 9:45 PM, around half and hour after the fireworks show ended, I decided it was time to start walking out. I started moving toward Future World during the Universe of Energy song, and my timing seemed just about right, as the old Epcot songs abruptly stopped playing when that song ended, around 9:50 PM. No other background music kicked in, either, which gave me a few minutes having the unusual experience of being inside a Disney park with no background music playing.

Having wandered off on my own a couple times in the late afternoon and evening, I was happy to hear that most of my friends who were in town were gathered at Trader Sam's that evening. They were settled in outside on the Tiki Terrace when I left Epcot for the evening at 10:16 PM, walked to my car at 10:23, and was parked at Polynesian by 10:36 PM. As I arrived, the group was moving to the Grog Grotto, so I got there just in time to join everyone inside.


After leisurely sipping two drinks and dropping some friends off at their resort, I was back to my hotel room by 1:05 AM, where I needed to pack to prepare to move to another hotel the next day. I also sorted through photos from the day's activities and eventually allowed myself to drift off to sleep.


No monkeys were harmed in the writing of this blog posts, though some humans were disappointed to not be present for the day's festivities, including my friends Jennifer and +Harvey.