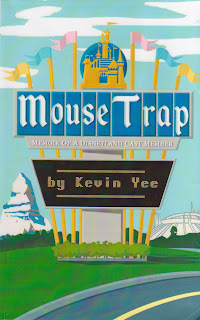 Mouse Trap is an easy read in which Kevin Yee provides a rare behind the scenes look at Disneyland from the perspective of an experienced former cast member. While I have not yet visited Disneyland, the brief glimpse into the orientation of a new cast member, hearing the inside terms, and reading descriptions of the backstage areas of the park helped me, a Disney World and theme park fan, have a broader picture of what goes into making the “magic” that I see in the parks. Having read one of the author’s books (Walt Disney World Hidden History

) and some of his online work (from http://ultimateorlando.blogspot.com/), I had confidence in his ability to deliver interesting material for a Disney fan and he did not disappoint. The prose is not always the most elegant, but Yee is an effective storyteller and has enough Disney experience to have a lot of stories to tell.

The book is divided into nine chapters, starting with the author’s Disney orientation and continuing through the end of his career as a Disney cast member. Yee admits to being taken in by the Disney magic, but is not afraid to be critical of the company. This is by no means a scathing tell-all attack of the company, but the author doesn’t hide some of the shenanigans that his co-workers were involved with. There are times when I felt like I was hearing stories where “you had to be there” to really appreciate, like when Yee mentions the early morning cast member canoeing practice or some of the other cast parties that the company used to hold, but things probably weren’t a whole lot different than company parties I was part of in my early twenties and knowing that Disney organized these get-togethers gave insight into how they formed happy and productive teams.

That leads to my biggest complaint about Mouse Trap, that it sometimes left me wanting to hear more of the author’s stories and more detail about some of those that he told. The “We are Family” chapter covered some of the aforementioned team building activities and employee celebrations in varying levels of detail, but many were glossed over. If they weren’t memorable enough to add personal anecdotes, then they probably didn’t need to be mentioned at all. The “Studying at the Disney University” chapter also left me wanting to hear more. In the previous chapter, the description of the CAST “four keys to success” offered insight into how Disney sets its priorities, and then the cast member training chapter listed a lot of courses, again with varying levels of detail, but all sounded like they would benefit employees in a wide range of industries. My last petty complaint about Mouse Trap is that many of the small black and white pictures were difficult to see in my copy of the book (I suspect this was a limitation of having the book printed at a reasonable cost, but perhaps the author, could or maybe already has, offer some of the pictures in greater detail on his web site) and the chart in the backstage chapter was difficult to follow (it is probably easier to see in color and it would help to have all of the descriptions of the numbered items on the chart on the same page as the chart itself).

Since my biggest concern about Mouse Trap is that I wanted to hear more about what I read, it’s easy to recommend this book to any Disney theme park fans. Regular Disneyland visitors will probably appreciate the book more, as they will already be familiar with most of the locations “on stage” that the author describes, but anyone interested in knowing what it is like to be a cast member at a Disney theme park will enjoy this book. The book isn’t for everyone, but Disney fans who like to know how real people make the parks work will find Mouse Trap well worth their time.

If you wish to purchase Mouse Trap, then use this link to amazon.com. NOTE: Using this link will help support this web site, as amazon will offer (at no additional cost to you) a small portion of the purchase price of the book to our site.  If you enjoy this book, then you may also enjoy the author’s blog (http://ultimateorlando.blogspot.com/) or follow him on twitter @cafeorleans