Book Review: Project Future: The Inside Story Behind the Creation of Disney World, by Chad Emerson 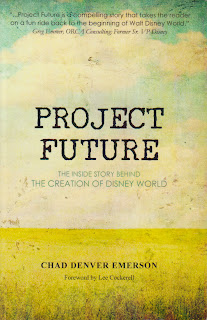 Project Future sets out to fill in the gaps that many books covering the history of Walt Disney World have left.  There is deliberately no talk of the construction of the park, its rides, hotels, or other attractions, as the author acknowledges that history has already been thoroughly documented.  Instead, Chad Emerson focuses on equally important, though easily overlooked, contributions to the history of Disney's Florida Project by outlining the real estate purchases and the legal foundation that set the new park up to enjoy success for years to come.

The book reads somewhat like a timeline, with each chapter including a date in its heading, and with the chapters more or less in sequence (there is sometimes an overlap timewise from one section to the next).  The content includes discussion of the search for potential locations for a second Disney park (following the success of Disneyland), narrowing in on a location in Florida, details about the individuals involved with the actual purchase of land in Central Florida, and a look at the legislative framework that allows Disney World to operate almost as a city unto itself.  These are some weighty topics and the book does follow through on its promise to cover them in more detail than others have done in the past.  Most people will find the subject matter somewhat dry, but Disney parks historians will enjoy it, though the book left me thinking the author could have shared more.

I'm glad to have read Project Future and think this book is worthy of inclusion in the library of anyone who studies the history of Disney World.  I've also had the opportunity to listen to interviews with Chad Emerson and it is clear that he is a knowledgeable and passionate person to tell the behind the scenes stories of the business side of Disney World's origins, but I fear he has omitted details in an attempt to reach a broader audience.  In the Acknowledgements section of the book, Emerson states, "My goal was to create an interesting book that would, whether relaxing on the beach, flying on a plane to Disney World, or anywhere else, provide the reader with a look at how the magic of Walt Disney World Resort came to be".  The goal of bringing this story to the masses is laudable, but I think the audience reading this book is limited to those seeking a deeper understanding of the park's origins than the 162 pages of text provide (there are a number of appendices tacked onto the end).  Emerson also chose to omit maps, diagrams, pictures, or any visual aids the supplement his words, which would have made it easier to following the story.  In doing so, he was able to produce a book at a lower cost to the reader, but the lacking the complete detail that the people likely to buy this book will expect. [NOTE: I know you can search for these visual aids online, but that is difficult to do if you are reading on the beach or an airplane].  Project Future does cover parts of the creation of Walt Disney World that you will not read anywhere else, but does not fully explain how the Reedy Creek Improvement District functions, how Disney was able to convince Florida lawmakers to allow the company to have such broad powers to essentially self-govern, and whether or not this model of private management of a large mass of land could still apply to companies today.  It is a good start for those seeking a complete understanding of the creation of Disney World, but not as complete as I was hoping.

If you wish to purchase Project Future, then use this link to amazon.com.  NOTE: Using this link will help support this web site, as amazon will offer (at no additional cost to you) a small portion of the purchase price of the book to our site.

If you enjoy this book, then you may also enjoy the author’s postings on the Blooloop.com web site (http://www.blooloop.com/blog/authors-posts/22) or his publishing company that has released several other Disney themed books (http://ayefourpublishing.com/).  Chad is also a regular contributor to The Season Pass Podcast (http://www.seasonpasspodcast.com/).  To date, he has participated in the following episodes:
d