This afternoon, the Disney Parks Blog hosted a live chat with Melissa Jeselnick, one of the Lead Imagineers for the redesign of Test Track in Walt Disney World’s Epcot. Jeselnick answered 25 questions, mostly submitted through the blog post announcing the event or from the moderator, along with a few questions from those watching live.  Below is a summary of what was covered. 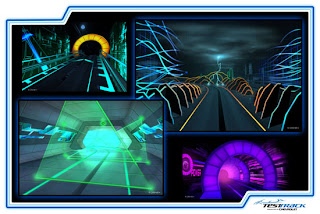 To those familiar with Disney World’s Test Track, there will be some similarities to the previous incarnation of that ride, but Imagineer Melissa Jeselnick described the new Test Track by saying “that whole attraction is completely reimagined”.  First, though perhaps of marginal significance, is Chevrolet, rather than parent company General Motors, taking over as title sponsor.  More obvious changes will be apparent once you enter the attraction, where “the queue will look like nothing our guests are used to seeing it look.”  Before you board your ride vehicle you will have the opportunity to make choices that will affect your vehicle’s performance in four areas, which will correspond to four different show scenes while on the ride: Capability, Efficiency, Responsiveness, and Speed.  Guests will use “interactive design kiosks” to “shape your vehicle and add attributes - pick the colors, the tires, and make it truly your dream vehicle”.  Capability is described as “where your car is tested for rough road and weather conditions”, Efficiency is the environmental impact of the vehicle, Responsiveness “tests maneuverability”, and Speed is, well you guessed it, the speed of your creation.  Jeselnick added, “Everybody in the vehicle will have their ride design, whether they designed individually or as a group.” 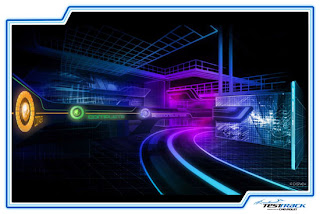 Jeselnick described the attraction as having “the same physical ride that our guests know and love.”  Though she did not directly answer the question of whether the ride path will remain the same, it sounds as though that will be true, but the scenes inside will be completely different.  This reflects a new focus for the attraction that Jeselnick describes as “basically changing from testing to design.”  Despite the focus on design, it appears the “test” in the attraction’s title won’t be changing, so the Test Track name will remain.  Exactly what the attraction will look like and how it will work is still uncertain.  Also still not clear from today’s presentation was the balance between live and virtual experiences, though Jeselnick did add, “We're using a lot of new technology to tell the story, but it is still a dynamic physical experience.”

After the ride, “you can keep interacting with your ride vehicle.”  Your design will be scored, “not just with the guests in your car, but guests throughout the day” and there will be “other opportunities to play with your design with multiple interactive elements.”  It was not described what those other opportunities will be or whether you will have a chance to share your design online, as you can with your Spaceship Earth future or your designs from Sum of All Thrills.  You will also see a showroom with current Chevrolet vehicles and “different concept cars”.

Some additional details about the reimagined attraction that were covered include the following: the opening date was only announced as “late fall”, the 65 mph loop remains, there will be a new soundtrack, there will be a single ride line, and the attraction will still use FASTPASS.  A little less clear was how the attraction will work when bypassing parts of the full queue.  Jeselnick mentioned an “expedited queue experience”, but it is not clear exactly what that means.  Additionally, as a single rider, it is not clear how you will be able to participate in the design process for your ride vehicle.  Lastly, a number of people online have expressed their desire for the overhang in front of the pavilion to be removed.  One person asked about this in a five part question and the Imagineer did not respond.

You can read the chat in its entirety by following this link and clicking the “Replay” button: http://disneyparks.disney.go.com/blog/2012/08/chat-live-with-walt-disney-imagineer-melissa-jeselnick-today-at-115-p-m-est/