The 1975 version of "Your Complete Guide to Walt Disney World" is very similar in structure and content to what was once contained in the Walt Disney World Information Guide and would later appear in a different looking Complete Guide. The brochure begins by highlighting some of the ways the Magic Kingdom celebrated the bicentennial, including a description of America on Parade and promoting the fact that Hall of Presidents, previously an E-ticket attraction, would be available to all park guests for free in 1975 and, "continuing through the summer of 1976."

The section on Magic Kingdom admission pricing is expanded from earlier guides, with additional ticket books offered, including one encouraging 2 day visits, though with less specificity on how many of each category of tickets are part of each ticket book. The sections describing the Magic Kingdom is consolidated, so attractions, shopping, and dining are all listed together for each land, while the detailed maps for each land that appeared in older guides have been removed, replaced by a detailed foldout map of the entire park, located in the center of the guide. Sections titled, "Tips on Your Visit," and "Helpful Information," which continued into future guides also appear in this brochure, as do four full pages of GAF Photo tips.

The Guide also includes detailed descriptions of each Disney resort, starting with the Polynesian Village (which previously was listed after the Contemporary), followed by the Contemporary Resort Golf Resort, Fort Wilderness, and Lake Buena Vista. The descriptions of the amenities at the larger resorts also now include information about which floor to find restaurants, shops, and other important locations in each hotel's main building. The concludes with a whimsically draw map of the full Walt Disney World property, accompanied by transportation information, along with ads for Disney's big theater release of No Deposit No Return and for the park's photography sponsor, GAF. 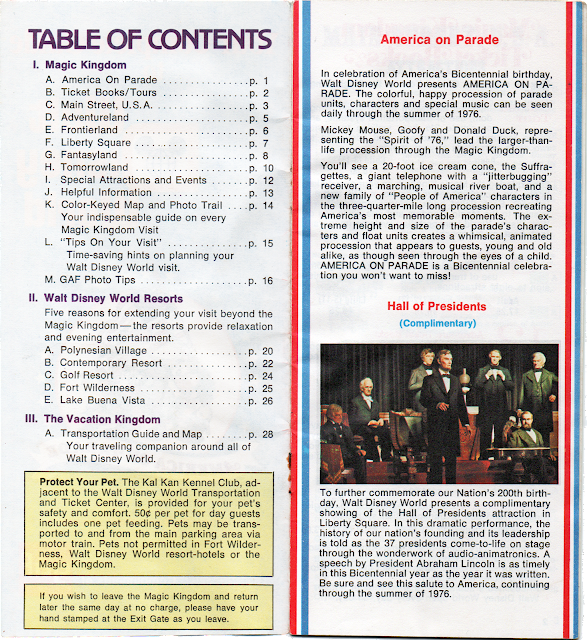 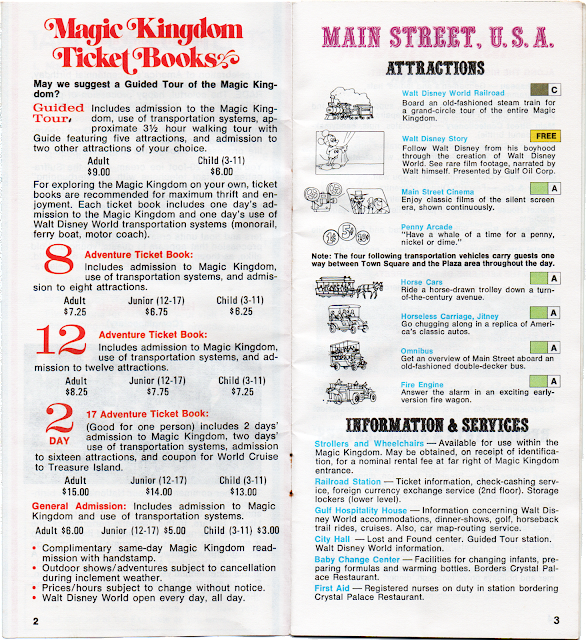 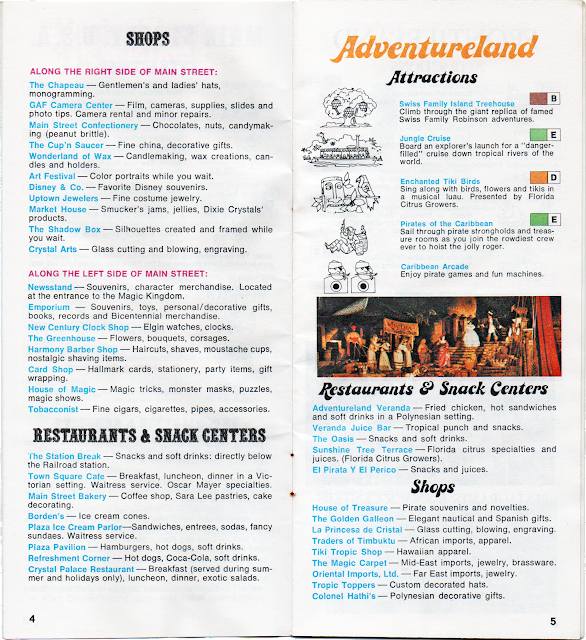 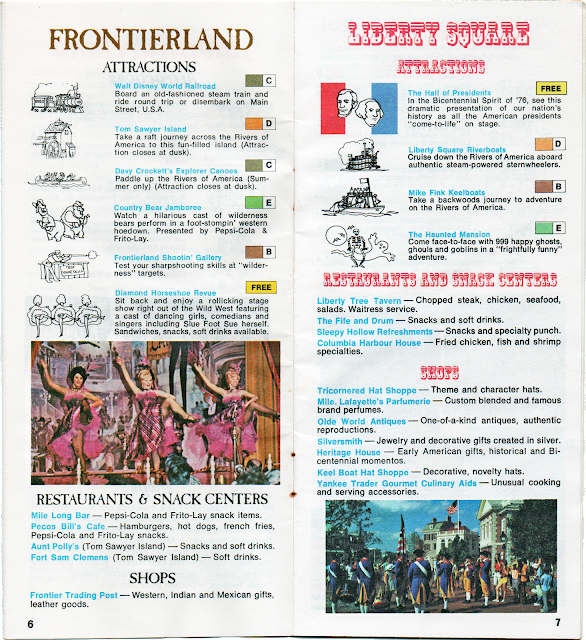 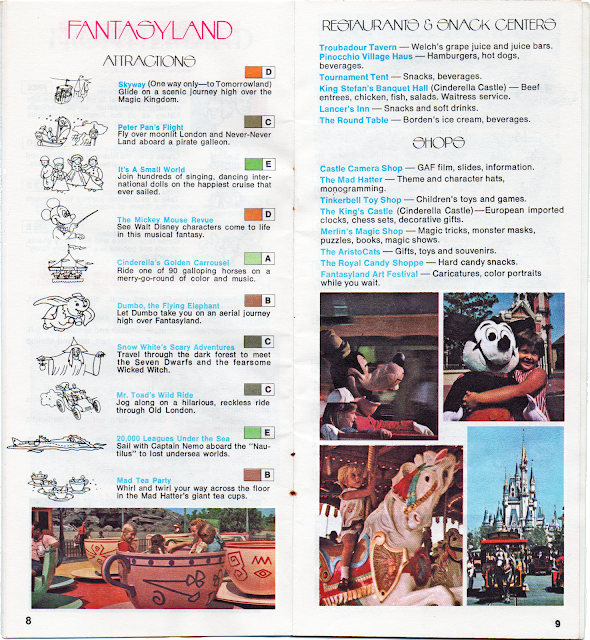 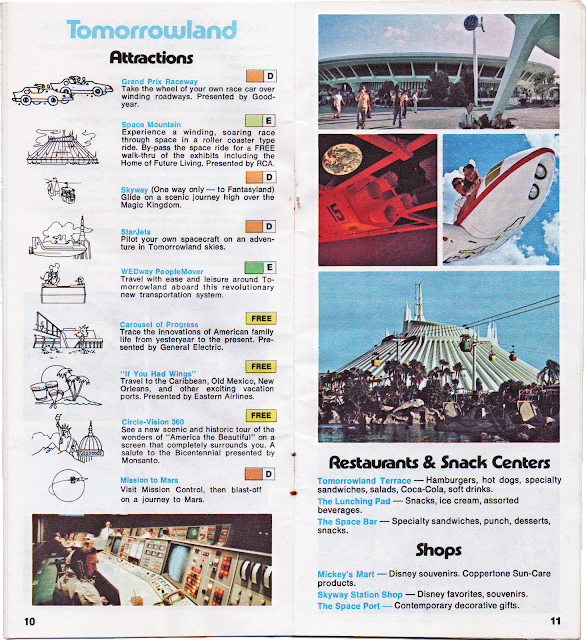 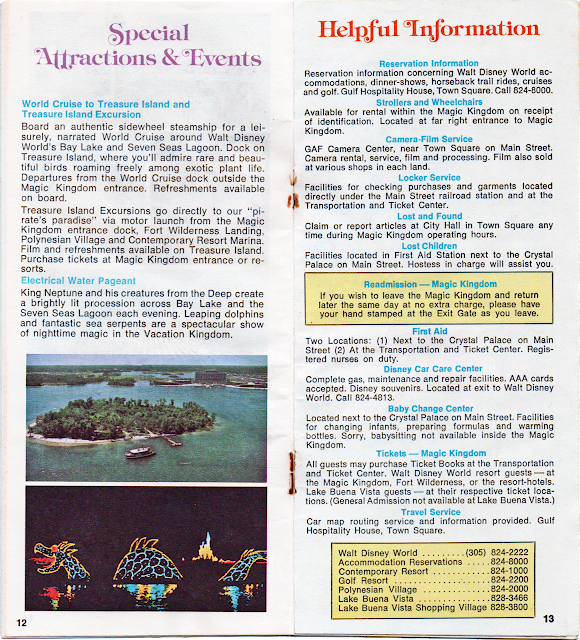 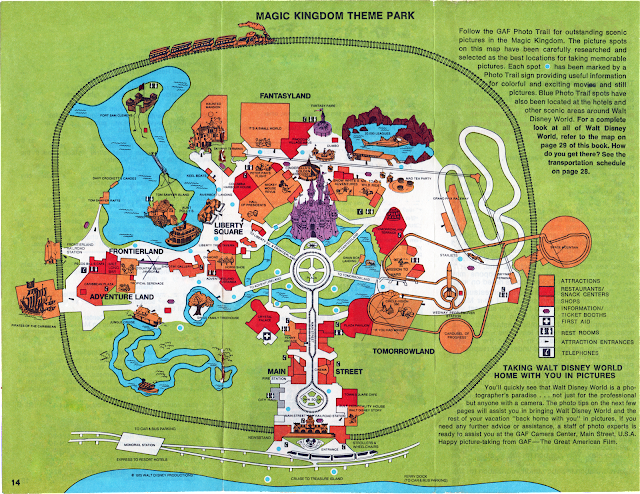 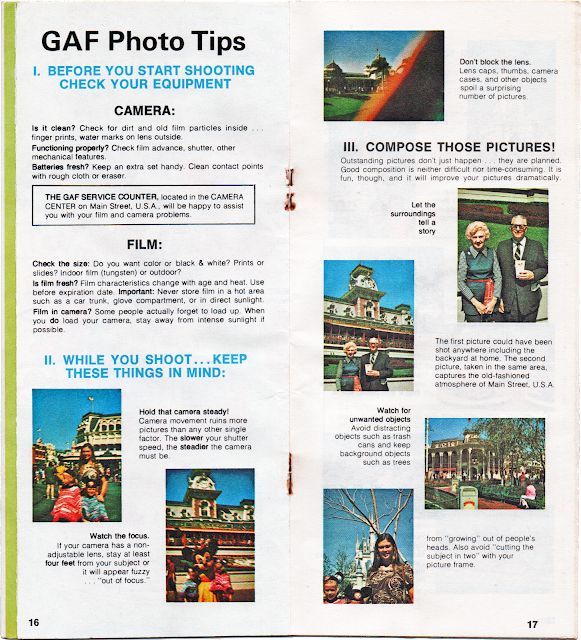 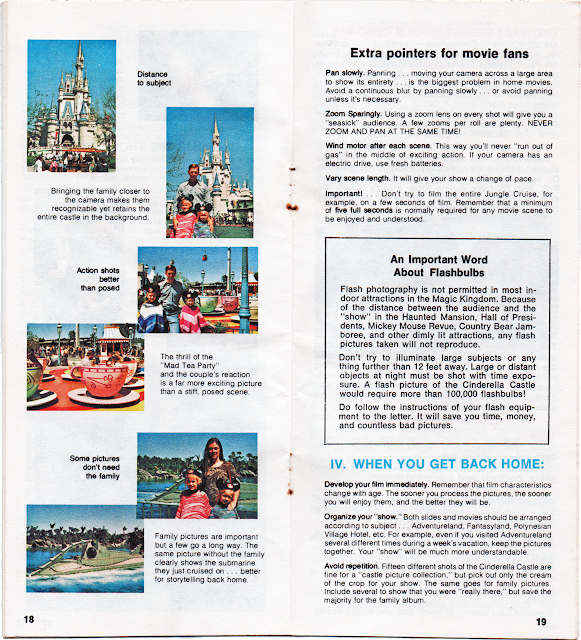 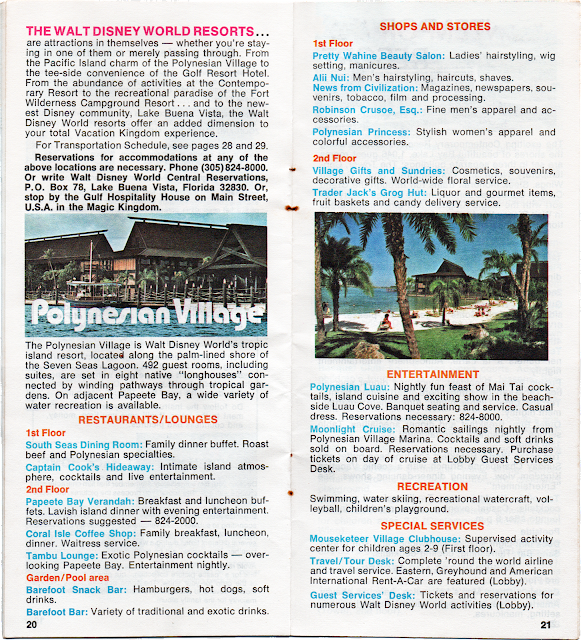 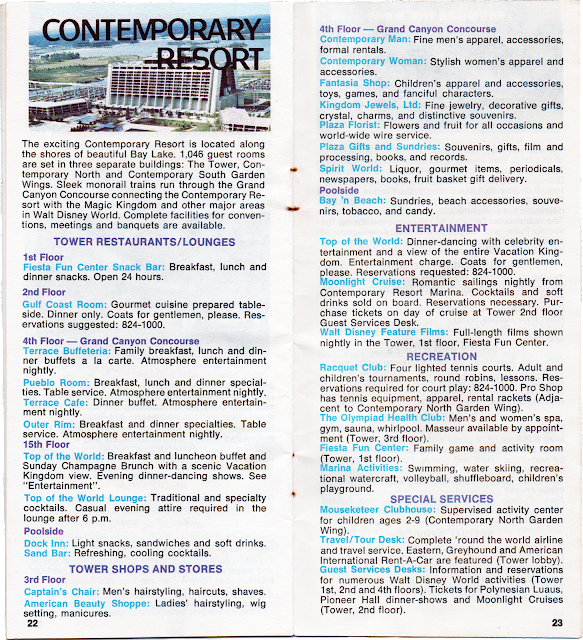 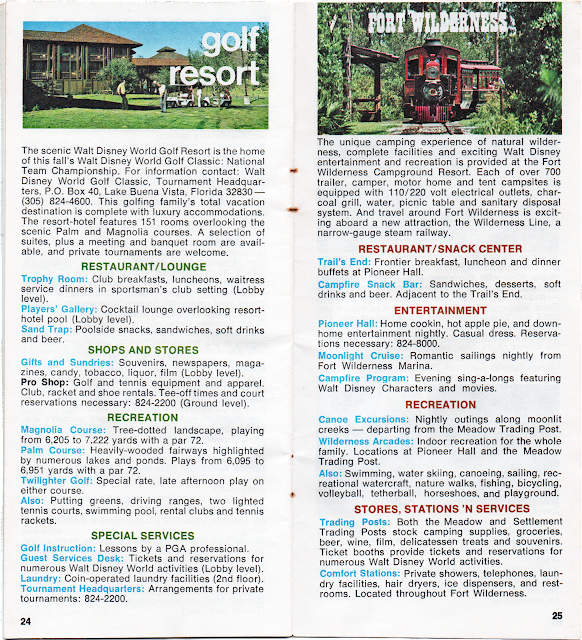 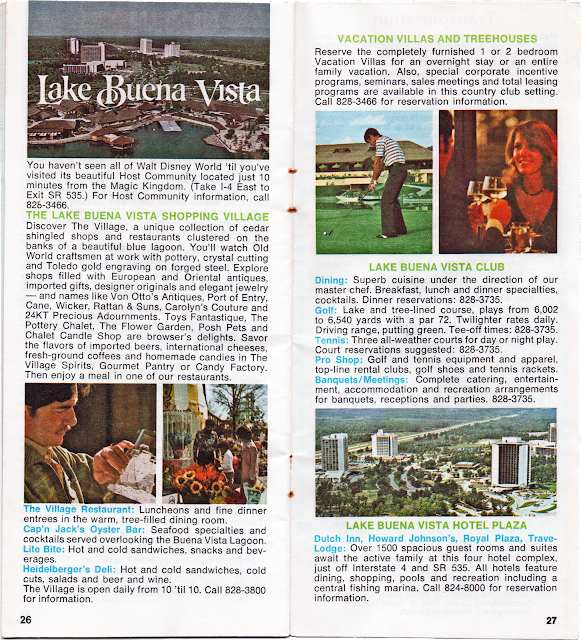 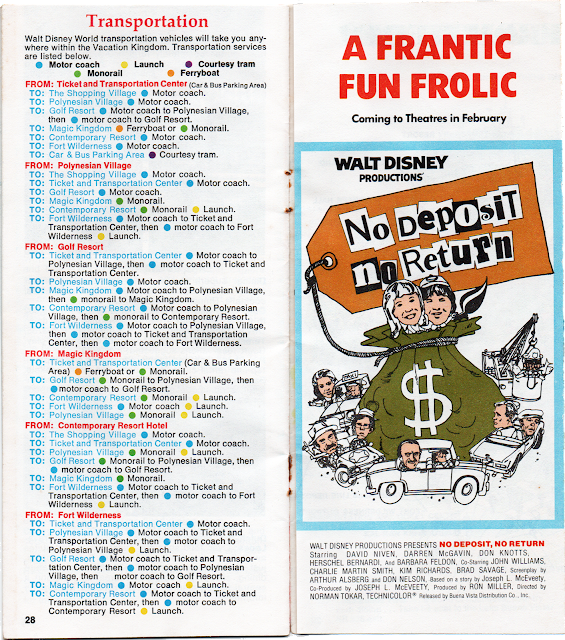 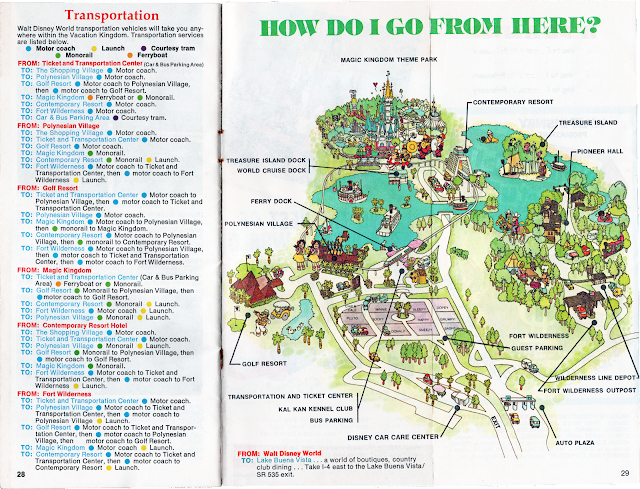 Posted by PracticalWDW at 11:29 PM